DUBAI, United Arab Emirates — A six-month window during which Israelis were able to visit Iran, Syria, Yemen and other nations that normally won’t let them in, ended Thursday with the closure of Expo 2020 in Dubai.

Some 20 million people visited the event in person, with another 150 million touring the country pavilions and other exhibits virtually.

At Iran’s pavilion, voted one of the Expo’s top eight architecturally significant buildings by Architectural Digest, there wasn’t an ayatollah in sight. Rather, the emphasis was on a rich cultural heritage, Persian rugs and saffron.

With great irony, given that Iran has openly dedicated itself to destroying the State of Israel, a special place was given to a replica of the 6th century BC baked clay Cyrus Cylinder.

The cylinder’s text is widely seen as evidence of Cyrus’s decision to allow the Jews to return from exile in Babylon to rebuild their Temple in Jerusalem, a confirmation of the link between the Jewish people and the Land of Israel.

The original was discovered in what was once Babylon and is now Iraq. It is held by the British Museum. 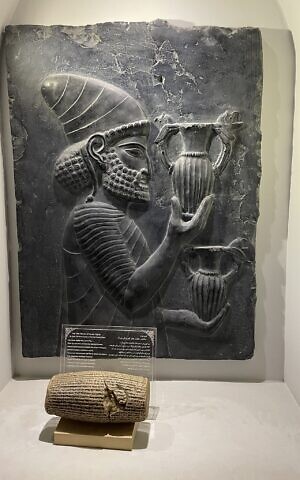 A replica of the 6th Century BC Cyrus Cylinder on display at the Iranian pavilion, Expo 2020 in Dubai, United Arab Emirates, March 31, 2022. (Sue Surkes/Times of Israel)

In a further paradox, in light of the repressive regime currently installed in    Tehran, the exhibition extolled the cylinder as the first declaration of human rights.

Expo 2020 was overwhelmingly large and bursting with weird and wonderful buildings, music, noise, flashing lights and swirling rivers of people. It was immaculately clean, thanks to armies of silent workers constantly sweeping and wiping, and to volunteers stationed everywhere to help direct the never-ending human traffic.

That traffic reflected Dubai’s status as an emerging global hub between the Middle East, western Asia and Europe, and the Indian subcontinent — from which more than a third of the UAE’s residents are drawn — and the Far East beyond. It is a glittering stop on a new Silk Road, and at the world’s fair, as elsewhere in Dubai, it seemed that all the peoples of the world were there.

One of the most impressive pavilions representing nations of the Middle East that do not have diplomatic relations with Israel was Saudi Arabia‘s. It was the second biggest after that of the UAE and conveyed messages of heritage as well as of power and vision.

One of its external walls was crossed by phrases such as: “We are in exciting times,” and “Where change starts.” 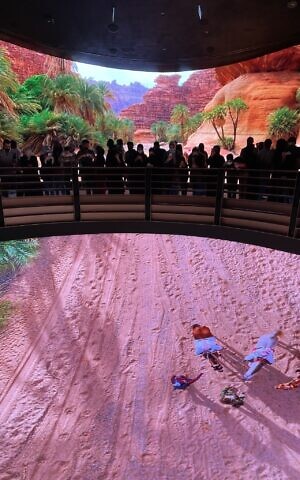 The entrance was via an escalator, which took visitors up past three-dimensional models of Saudi buildings onto which moving images of people were projected.

The main exhibit comprised two huge panoramic screens with a visitor balcony running around the middle. Gorgeous vistas of coral reefs, sand dunes and oases, as well as Mecca, modern cities and the kingdom’s oil fields, filled the upper screen, with aerial images of the same places projected on the lower one.

Compared with Saudi Arabia’s pavilion, Syria‘s was rather sad, a reflection either of the country’s financial situation or the fact, according to The Associated Press, that it was only invited two years ago, after the UAE reopened its embassy there, and was the last to start building.

With a perhaps exaggerated sense of optimism, the welcome sign explained that the country wanted to showcase its rich cultural history  “as we seek to rise again and reclaim our place in the world.” 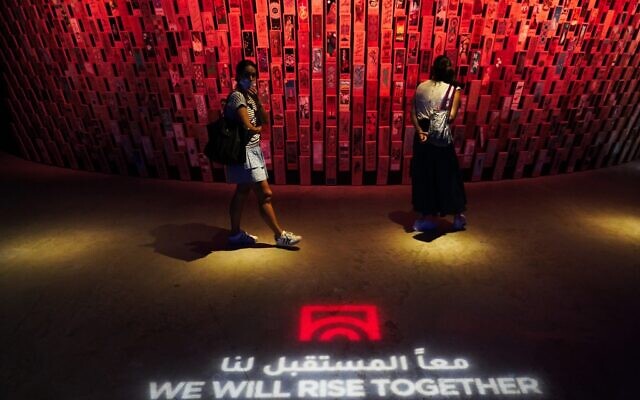 The film there was old and wonky. The main exhibit, “I am Syrian,” comprised a series of wooden rectangles on which Syrians had painted what was dearest to them about their country.

Out of the hundreds of images of scenery and cultural items peeped one photo of Syrian leader Bashar Assad and another of his wife, Asma.

Lebanon’s pavilion was surprisingly pleasant given that country’s dire financial straits, projecting aerial footage of the nation’s scenery and antiquities, and showcasing a modern dance installation and items of contemporary art. 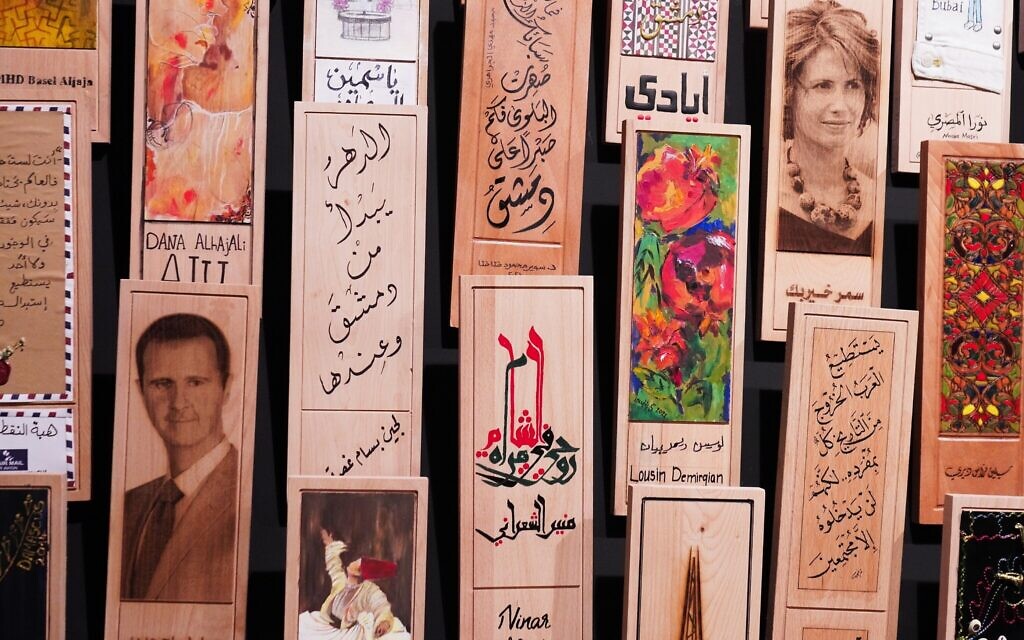 Tablets made by Syrians are seen at Syria’s pavilion at Expo 2020 in Dubai, United Arab Emirates, on October 2, 2021.(AP Photo/Jon Gambrell)

I was unable to visit the pavilion of the State of Palestine, as it was temporarily closed due to a technical malfunction.

But at the exhibit built by Yemen, undoubtedly one of the poorest nations in the region and a country torn apart by civil war, things were bustling.

The focus there was on knowledge and wisdom, with texts noting the country’s early water engineering, astronomy and “the world’s first skyscrapers.” 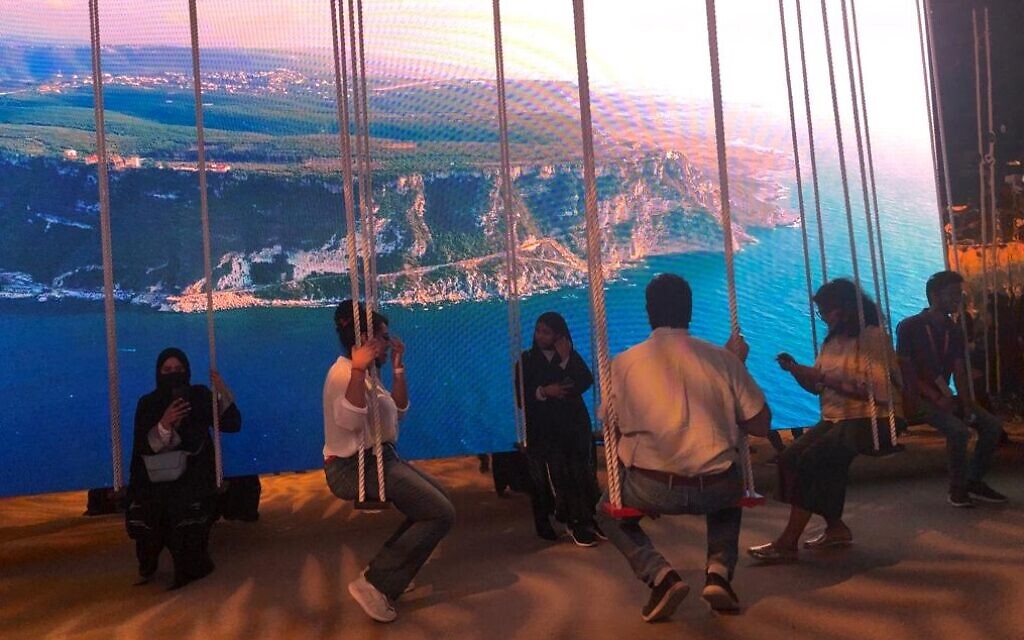 A Yemenite gentleman, who did not want to give his name, asked me where I was from.

Hearing I hailed from Israel, he broke into a wide smile and said, “Ah, Ahlan wa Sahlan (which means ‘welcome’ in Arabic)!”

Then, pointing to the jewelry on sale in the small souvenir store, he added, “Look at all that jewelry, it’s Jewish!”

He indicated pieces incorporating gemstones such as amber with silver filigree. Once, Yemen’s silversmiths were Jews. 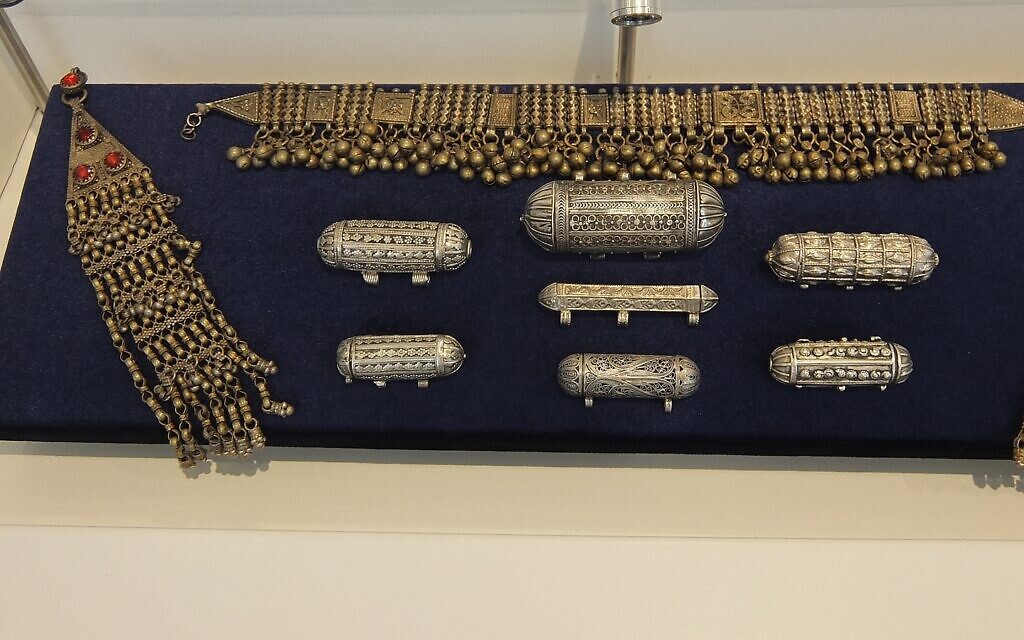 In March, according to a United Nations report about the treatment of religious minorities in conflict zones, only one Jew remained in the country.

“Many Yemen (sic) Jews in Israel, no?” he went on enthusiastically. “Eat malawah and jahnun (two kinds of pastry associated with Yemenite Jews and now popular among all Israelis.)”

Bidding goodbye, he said, “Say hi to Israel from Yemen!”