MOUNT GERIZIM, West Bank — The courtyard on Mount Gerizim overlooking the northern West Bank city of Nablus was abuzz Sunday evening as Samaritan elders led their small community in vociferous prayer to commence the celebration of their Passover holiday.

But the main attraction was toward the back of the courtyard where a male representative of each Samaritan household attempted to straddle a sheep between his legs — a task that proved difficult as the ritual neared its climax and the animals got increasingly squeamish.

The central portion of the prayer service was led by the high priest himself, whose entire body began to tremor as he shouted out verse after Aramaic verse into a microphone held by one of his several assistants.

Then, in what seemed reminiscent of a Spartan war call, the elder community leader raised his staff in the air and shouted out one last biblical passage describing the imminent ritual sacrifice.

Amid victorious shouts from the entire crowd, the dozens of men began wrestling their sheep to the ground and slaughtering them simultaneously.

Keen on their entire families taking part in the annual ritual, the men then shuffled around the courtyard smearing sheep’s blood on the foreheads of their wives and children.

They subsequently returned their attention to the sheep carcasses and began preparing them for supper. 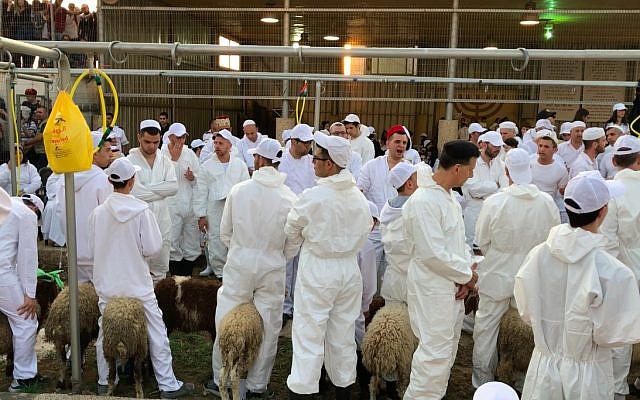 Samaritans take part in the traditional Passover sacrifice ceremony, where sheep and goats are slaughtered, at Mount Gerizim near the northern West Bank city of Nablus on April 29, 2018. (Jacob Magid/Times of Israel)

As the household representatives took the animals apart, the entire community began exchanging holiday greetings. These were heard in both Hebrew and Arabic, thanks to the dual identities of the storied religious minority that resides on both sides of the Green Line.

Samaritans trace their lineage back to the biblical tribes of Ephraim and Menashe, the sons of Joseph. They defied imperial conquests and clung to the land while much of the population of the Northern Kingdom of Israel was exiled to Assyria — presently northern Iraq — by King Sargon II in 722 BCE.

When exiled Jews began returning to Jerusalem from Babylon in the 6th century BCE and building the Second Temple, they refused to recognize the Samaritans as coreligionists. 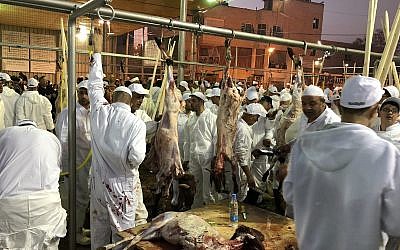 Samaritans take part in the traditional Passover sacrifice ceremony, where sheep and goats are slaughtered, at Mount Gerizim near the northern West Bank city of Nablus on April 29, 2018. (Jacob Magid/Times of Israel)

From the nearly one million member strong Samaritan kingdom that existed in the Roman era, only some 800 of the religious sect remain today. Half live on Mount Gerizim in the northern West Bank and half live in the Israeli city of Holon.

Rejecting the rabbinic traditions of the oral law, the Samaritans derive their religious customs directly from their version of the Torah, or Pentateuch, which closely parallels the story of the Five Books of Moses.

The three main pilgrimage holidays mentioned in the Bible, Sukkot, Passover and Shavuot, are still celebrated today by both Samaritans and Jews alike.

But where ancient Jews converged on Jerusalem for each of those holidays, the Samaritan faithful gathered on Mount Gerizim, which they believe is God’s chosen site and where layers of the ancient Samaritan temple destroyed and rebuilt over millennia still exist today. 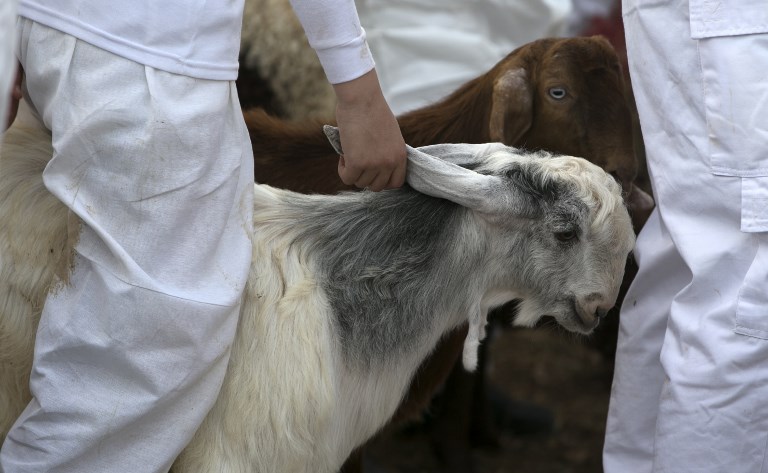 A man holds a goat as Samaritans take part in the traditional Passover sacrifice ceremony, at Mount Gerizim near the northern West Bank city of Nablus on April 29, 2018. (AFP)

While the Samaritans say that their mass Passover slaughter has remained the same for over 3,500 years, one recent development has been in the unique ritual’s attraction of hundreds of spectators, who crowd the fences surrounding the courtyard, waiting excitedly for the high priest to raise his staff.

The makeup of the audience each year is a testament to the Samaritans ability to successfully straddle the Israeli-Palestinian political divide.

Those living on Mount Gerizim have long enjoyed close relations with neighboring settlers from some of the West Bank’s most hardline Jewish communities, while also earning the respect of surrounding Palestinian villagers. 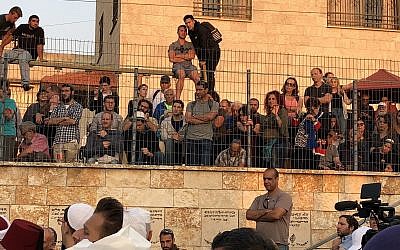 Israelis look on as Samaritans take part in the traditional Passover sacrifice ceremony, where sheep and goats are slaughtered, at Mount Gerizim near the northern West Bank city of Nablus on April 29, 2018. (Jacob Magid/Times of Israel)

Representatives from both groups were in attendance Sunday and even given specially reserved seats on bleachers within the courtyard fences.

Asked whether hundreds of camera-equipped spectators irritated the Samaritans as they tried to perform one of their most holy rituals, Hokin Marhiv Baruch dismissed the concern.

“Not only do we not mind the visitors, we encourage them!” said the Samaritan elder. “We want Israelis, Palestinians, and people around the world to see what our beautiful religion is about.”

Standing next to Baruch was 16-year-old Shai Tzedaka, who reinforced the elder’s point by excitedly sharing his experience growing up as a Samaritan in Holon.

“I identify as a full Israeli, and I know my cousins here in Mount Gerizim identify themselves as full Palestinians. Both sides see us as very similar and respect us deeply.” 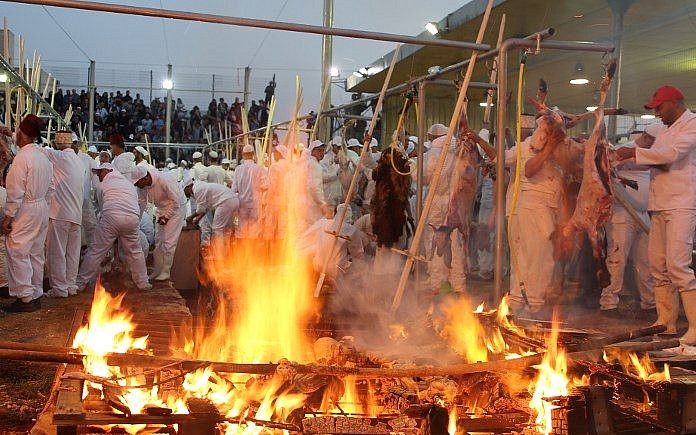 Samaritans take part in the traditional Passover sacrifice ceremony, where sheep and goats are slaughtered, at Mount Gerizim near the northern West Bank city of Nablus on April 29, 2018. (AFP)

Tzedaka admitted to being a little less adherent to Samaritan religious laws during the majority of the year, but the annual Passover ritual was one of the few exceptions.

“If you don’t take part in the service you are announcing that you abdicating from the faith,” he explained.

“I’ve been coming here for as long as I can remember and I really enjoy it,” he added emphatically.

Times of Israel staff contributed to this report.