5 years ago, I photographed an almost absurdly improbable interaction; at the time, the IDF wouldn’t allow publication, but now Benny Gantz is running for PM, it’s been unfrozen

Judah Ari Gross is The Times of Israel's religions and Diaspora affairs correspondent.

Five years ago, after a massive snowstorm, the IDF chief of staff got into a snowball fight with a Palestinian family on the side of a West Bank highway.

I was then the chief of staff’s photographer and, as was my duty, I caught on film the improbable encounter. But the IDF Spokesperson’s Unit refused to allow the picture to be printed, saying it would only be released to the public “when there’s a peace agreement.”

Now, however, the chief of staff in question, Benny Gantz, has entered politics and is campaigning for the premiership, and — peace be damned — the Israel Defense Forces has decided the photograph can be published.

To be clear: This is a story about the picture and the moment it captured. It is not an endorsement of the candidate, of whose politics this reporter has neither insight nor opinions to offer.

I first told the story of the incident last June, on the Times of Israel-sponsored Why Why Why podcast. At the time, I thought I would have to wait for a highly unexpected accord between Israel and the Palestinians. Apparently not. 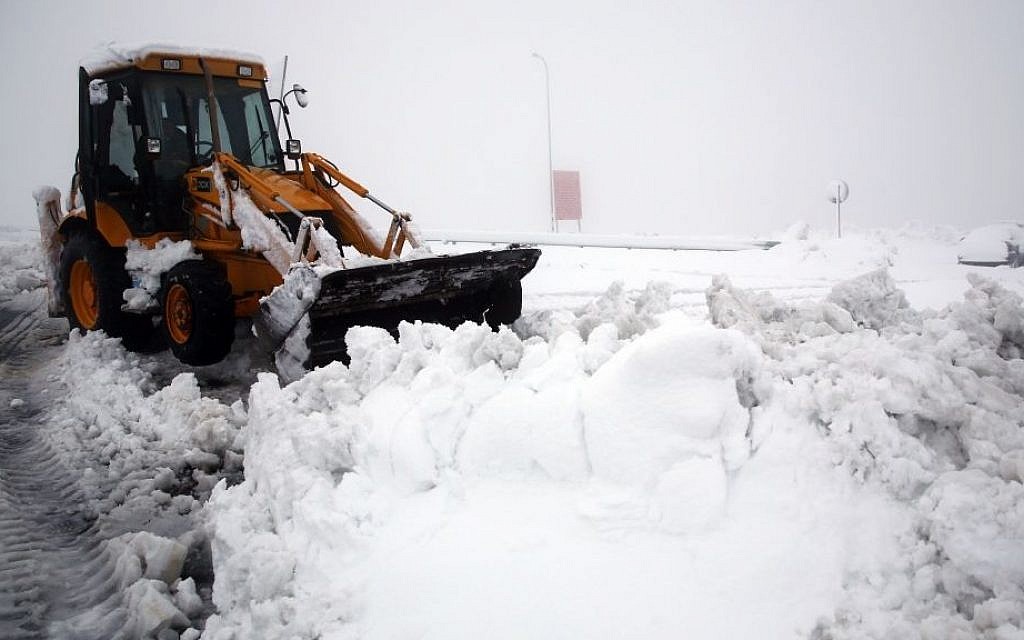 A tractor plows snow on the road at the Al Hader intersection in the West Bank, Saturday, December 14, 2013. (Nati Shohat/Flash 90)

In December 2013, a heavy snowstorm knocked out electrical lines and caused damage across the West Bank. So Gantz, flanked by his staff, went to see the damage and what the army could do to help. Nachum Barnea, Yedioth Aharonoth’s senior columnist, was along for the ride as part of an article he was writing about Gantz’s final year as IDF chief.

As we were driving down a snow-packed road, the chief of staff spotted a group of three Palestinians — a husband, a wife and their grown daughter — playing in the snow. He called for the entire line of cars to pull over so that he could speak with them.

Through a translator, the husband explained that they were heading to Jerusalem’s Hadassah Hospital Ein Kerem so his wife could get cancer treatment. Along the way, they had decided to stop and have some fun.

As we were chatting, the mother scooped up a handful of snow, packed it into a ball and threw it at her daughter. Everyone laughed. Who doesn’t want to be a kid again?

Then Gantz leaned down, scooped up his own handful of snow, packed it into a ball and threw it at the mother. 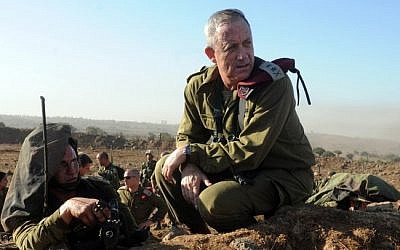 She responded, throwing a snowball at the chief of staff, hitting him in the shoulder.

In an instant, an honest to goodness snowball fight had broken out between the head of Israel’s military and a Palestinian family.

More laughter all around — except, of course, from the chief of staff’s body guards, who didn’t seem particularly amused by the situation.

As quickly as it started, the snowball fight ended. Everyone waved goodbye and went their separate ways.

A few days later, the snow melted, power was restored, roads were cleared and Barnea’s article was published, describing the bordering-on-absurd interaction for all to read. Naturally, it was headlined: Kador Sheleg, or snowball.

But the photograph accompanying the article was not the one you see above. It was a snap I took of the moments before the snowball fight broke out, when Gantz was still just speaking with the Palestinian family. 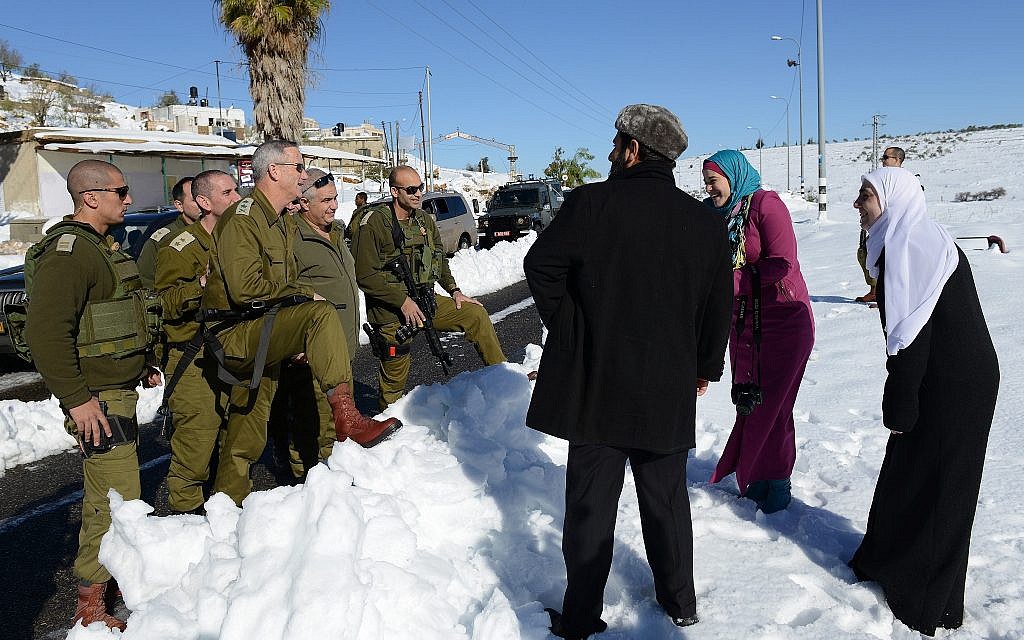 There’s far less joy in the photograph of that interaction. While the Palestinian family is smiling, Gantz is not. He stands across from them with his M-16 assault rifle in his grasp on his knee, one of his bodyguards with his hand clearly on his pistol and another holding his assault rifle as well — a clear reminder of the power discrepancy between the two sides. 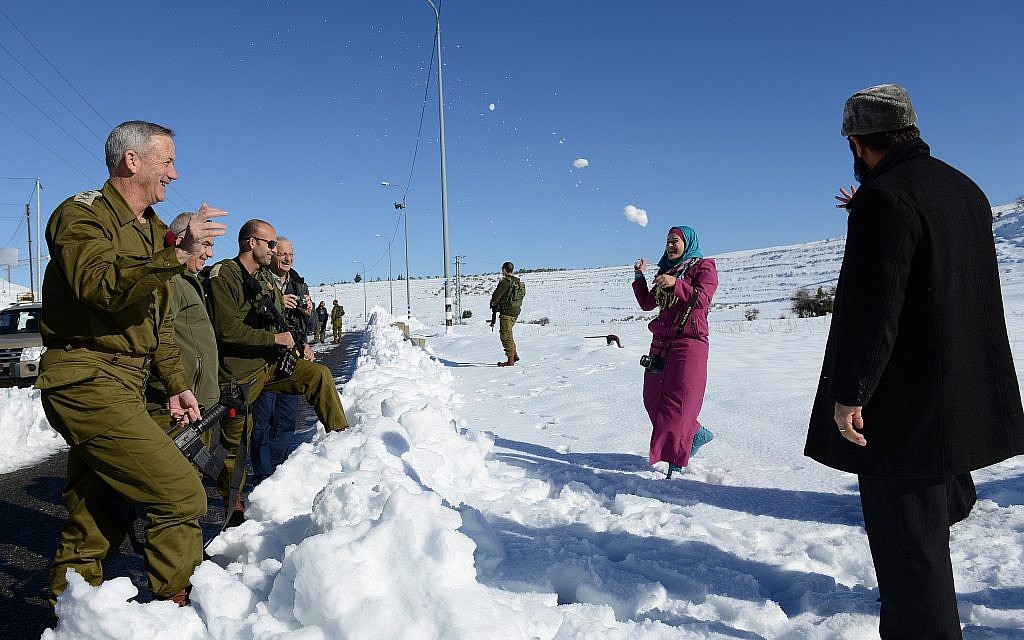 Then-IDF chief of staff Benny Gantz has a snowball fight with a family of Palestinians along the West Bank’s Route 60 highway on December 15, 2013. (Judah Ari Gross/Israel Defense Forces)

In the photo of the snowball fight, by contrast, the chief of staff had already put his gun at his side, the soldiers are laughing, the Palestinian daughter’s smile is wide, and there are snowballs in flight.

But there were concerns at the time that publishing it might put the Palestinians in an awkward spot, making them seem a bit too buddy-buddy with the “Zionist occupiers.”

The Israeli military did not respond to a Times of Israel request for explanation why the photograph was suddenly cleared for publication, despite the notable absence of the requisite peace agreement.