A broken dresser sat atop a mound of discarded items in the open Tel Aviv air. Protective tape still enveloped the decrepit piece of furniture, a stark reminder that someone had once cherished it, tried to keep it safe.

“This used to be my home,” Ronit Aldouby sighed as she surveyed the piles of debris and refuse that were her neighborhood just a few days earlier. “This dresser is ours. It was grandma Penina’s.”

In the place once known as Givat Amal Bet, torn posters still call for Justice Minister Gideon Sa’ar and Interior Minister Ayelet Shaked to take responsibility for the devastation.

Half-standing walls bear testament to the homes that once were. Household garbage from current and prior rounds of evictions litters the ground. A walker lies abandoned, and laundry blows on a clothesline. In each direction looms a high black wall with advertising promising an exciting new real estate project from the Hagag Group.

Once a tight-knit enclave of about 120 families, the working-class neighborhood of Givat Amal Bet has been excised piecemeal since 2014 to make room for six luxury towers, replacing some of Tel Aviv’s poorest residents with some of its wealthiest. On November 15, the neighborhood’s last 32 families were forced out, effectively closing the book on its nearly-75-year history, but leaving open wounds as residents struggle to cope with the loss of their homes and communities, and seek fair compensation for both.

Nestled between the leafy Bavli and ritzy Park Tzameret neighborhoods, Givat Amal — the name literally means Hill of Toil — is overshadowed by some of the city’s poshest real estate.

Once a tight-knit enclave of about 120 families, the working-class neighborhood of Givat Amal Bet has been excised piecemeal since 2014 to make room for six luxury towers, replacing some of Tel Aviv’s poorest residents with some of its wealthiest

Yet, the neighborhood has always been one of Tel Aviv’s most dilapidated. Residents claim that for decades the city neglected to pave roads, install street lighting, and even properly deal with sewage.

“They never invested in this area,” said former resident Chani Smucha, 59, whose parents were among the recent evictees, along with three of her siblings and their nuclear families. “We made our own post office boxes. They never even installed a park bench for an old person to sit on.” 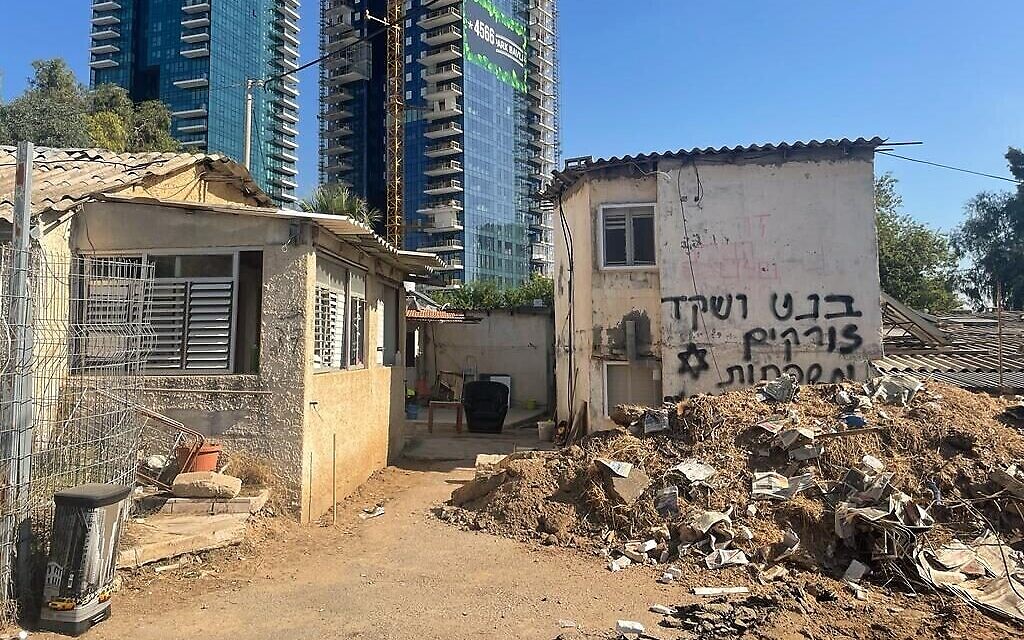 Since a first round of evictions in 2014, during which some 80 families were forced out, authorities have also refused to clean up the piles of debris and refuse left behind. The tactic, said Smucha, was clear: “The trash was left where it was so people would suffer and leave.”

Givat Amal traces its roots to 1947, when David Ben-Gurion asked a group of largely Mizrahi immigrants to leave their homes in Neve Tzedek, near the south of the city, and settle the land of an depopulated Arab village to the northeast that was being held by the Haganah pre-state militia. Almost all residents who lived there until recently were from the original group brought in by Ben-Gurion, or their descendants.

That includes Chani Smucha’s parents, Haim Levi, 86, and Rachel Levi, 79, who moved to the neighborhood in 1947 as children. They married and stayed in Givat Amal to raise their family.

“They don’t know anywhere else,” Smucha said. “This is the home they grew up in and lived in their whole lives, 75 years.” 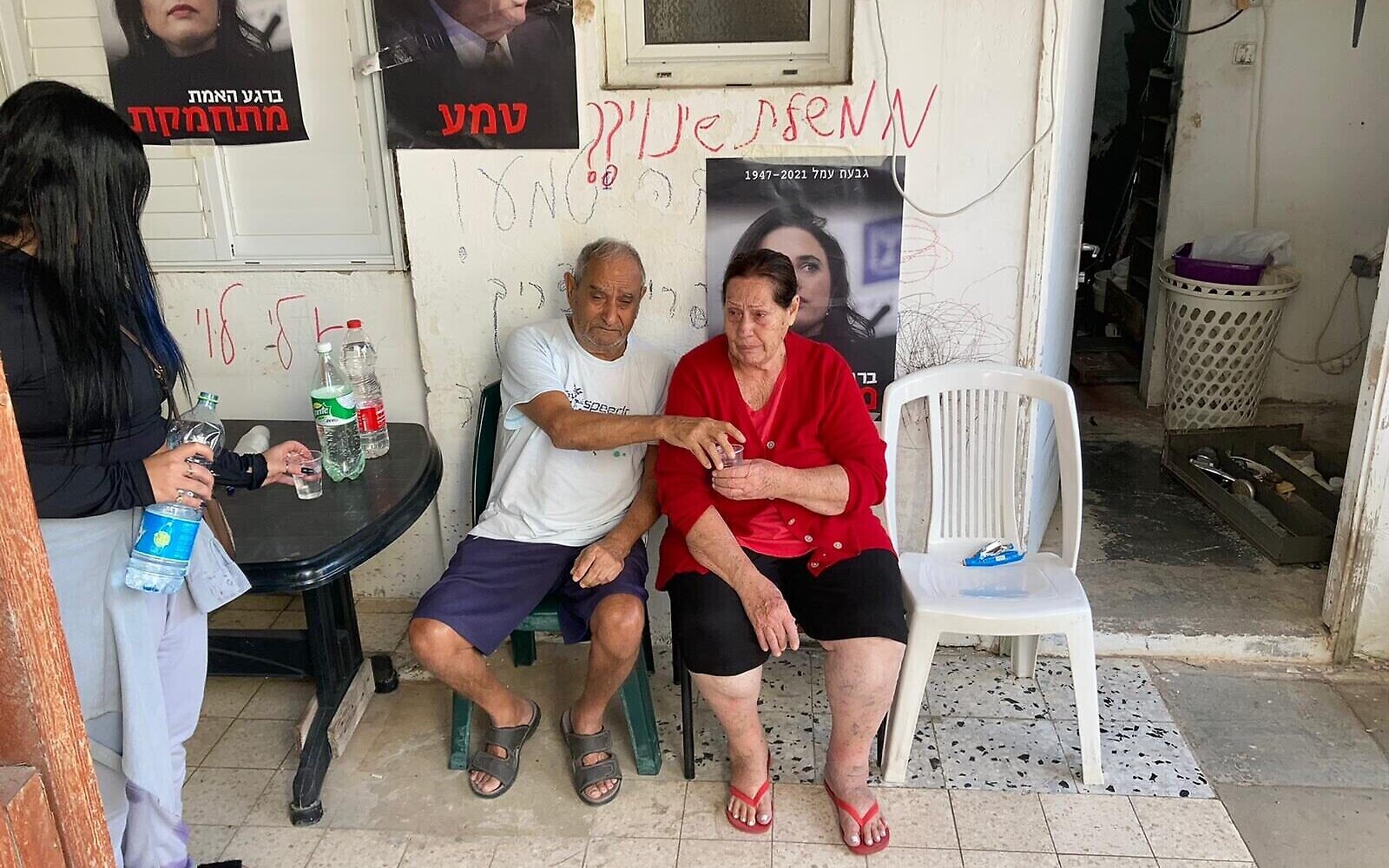 After the war, residents sought to formally purchase the land, but were ignored by the state, which instead sold the land to developers in 1961. In 1992, a deal was reached to compensate residents of the western portion of the neighborhood, known as Givat Amal Aleph, in order to build the three Akirov towers, a luxury complex counted among Tel Aviv’s most exclusive addresses.

In Givat Amal Bet, development rights for the plot continued to change hands until 2005, when it was acquired by billionaire Yitzhak Tshuva’s real estate company Elad Israel Residence, which then engaged in a 16-year legal battle to clear out the rest of the neighborhood.

While the land is now set to be developed by the Hagag Group and Y.H. Dimri, who bought the rights from Elad — and Tshuva himself has recently sold his ownership in Elad — Tshuva has remained legally responsible for both evicting and compensating residents.

Yitzhak Tshuva’s representatives did not respond to a request for comment.

The legal battle with Tshuva and his representatives was described by residents as especially bitter. Some residents who were evicted in 2014 are still awaiting compensation for their homes, while others had to sue to get anything.

In 2016, Tshuva sued the remaining residents for compensation as squatters on his land. Instead, the Tel Aviv District Court ruled they were entitled to compensation themselves, in line with the original court case between residents and the state, when the land was first sold to developers in 1961. 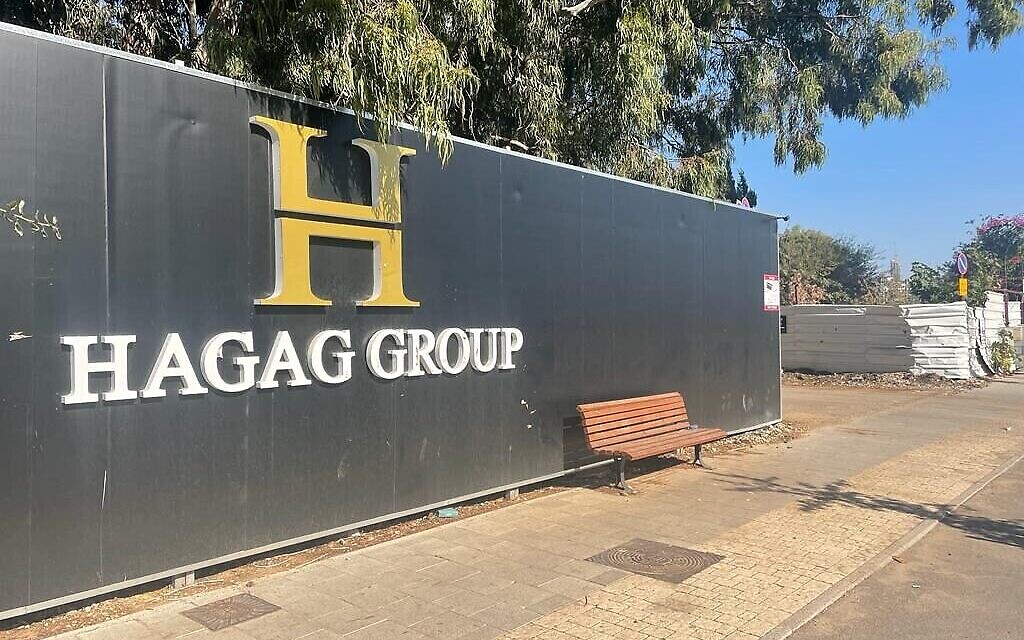 Under a final court determination in April of this year, Tshuva was ordered to compensate residents about NIS 3 million ($970,000) for each of the 11 plots that had been occupied in 1961, the total to be divided among the 32 nuclear families that were ultimately evicted seven months later.

Residents claim the money they received from Tshuva, roughly NIS 1 to 2 million ($320,000 to $645,000) per nuclear family, is not fully compensatory. Nor is it enough to buy suitable housing in Tel Aviv, recently crowned the world’s most expensive city, where the average price for a four-room (three-bedroom) apartment is over NIS 4 million ($1.3 million).

“We have the compensation, but we’re still deciding what to do with it — to rent, to buy?” Smucha said. “With this kind of amount, what can we do? Where will I take [my parents] — to Dimona, to Beersheba [both peripheral southern cities]? Where will I take them? These are people who’ve lived in Tel Aviv their whole lives.”

The money they are getting has been eaten into significantly by legal fees and court-approved deductions for having overstayed their permitted time on the land.

Over the summer, residents met with MKs Gaby Lasky (Meretz) and Naama Lazimi (Labor) to work on a framework agreement to evacuate residents respectfully, as well as provide additional government compensation, in recognition of the state’s past failings in dealings with Givat Amal.

“The goal was, after signing this, [a representative] would go to the municipality and the developer and set an agreed-upon removal date. There was even supposed to be a ceremony, so residents could leave with dignity,” said Aldouby, a longtime Givat Amal resident and unofficial spokeswoman for the neighborhood.

The agreement remained one-sided, however. Instead, Tshuva requested that Tel Aviv city hall issue an order to vacate, which it did, despite intercession by Lasky and other official figures.

In a statement, a spokesperson for city hall highlighted the compensation residents would receive, but deflected responsibility for the fate of the area.

“As per the past, we are willing to push forward any proposals, led by the state, that will benefit the residents on the issue of eviction and their implementations, but it is important to emphasize the proposals should respect the legal requirements,” the statement read.

‘Not criminals, not squatters’

Families described a painful, traumatic eviction that has left many feeling broken. 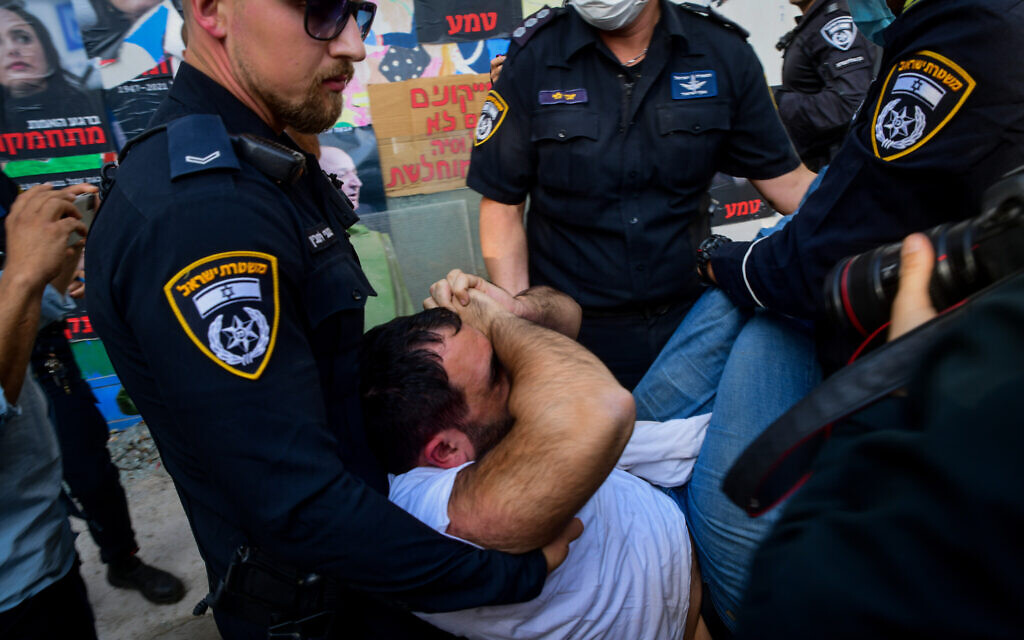 Smucha said her family knew “for about a month” that the eviction would be going through, although they were never notified by Tshuva’s representatives of a specific date and only ever received an order with range of dates when it could occur. The residents claimed they only learned they would be forcibly evicted on November 14.

The next day, some 1,000 police officers, including some from elite units, arrived to evict the 32 families, according to Smucha.

“We were in shock over the amount of police. We didn’t understand why all of this was necessary,” Smucha recalled. “Good people, salt of the earth. Not criminals, not squatters, not causing trouble.”

Some families left on their own accord, while others were physically removed by the cops in a scene described by two residents as “violent.”

A spokeswoman for Lasky, who was present on eviction day as an advocate for the community, described elderly residents being physically carried out of their homes.

“They evicted a woman who required full nursing care, who couldn’t walk,” the spokeswoman said.

In the Cohen family home, residents and their supporters linked arms and chanted “shame” in front of posters criticizing politicians as “out of touch” or “apathetic,” before dozens of police came in to drag them away.

Police representative Yifat Ziv told The Times of Israel that deployment levels had been set with the goal of discouraging resistance.

“The police assisted the executing contractor in enforcing a judicial eviction order and to that end arranged appropriate forces. The evacuation was carried out with sensitivity and without any unusual incidents,” she said.

Representatives of Tshuva were also present, and according to Smucha, antagonized residents. One Tshuva representative threatened to tow a moving truck as residents loaded personal effects from their homes onto it, Smucha said.

“He sees my mother stressed, shaking and crying… you see them broken, and you’re still stepping on them? This is stuck in my head. He didn’t let them leave their houses, in the final minutes, with honor. He crushed them until the end,” she said.

Aldouby condemned the method of eviction, especially given the efforts residents and Knesset members had put into outlining an ultimately fruitless plan to peacefully evacuate. 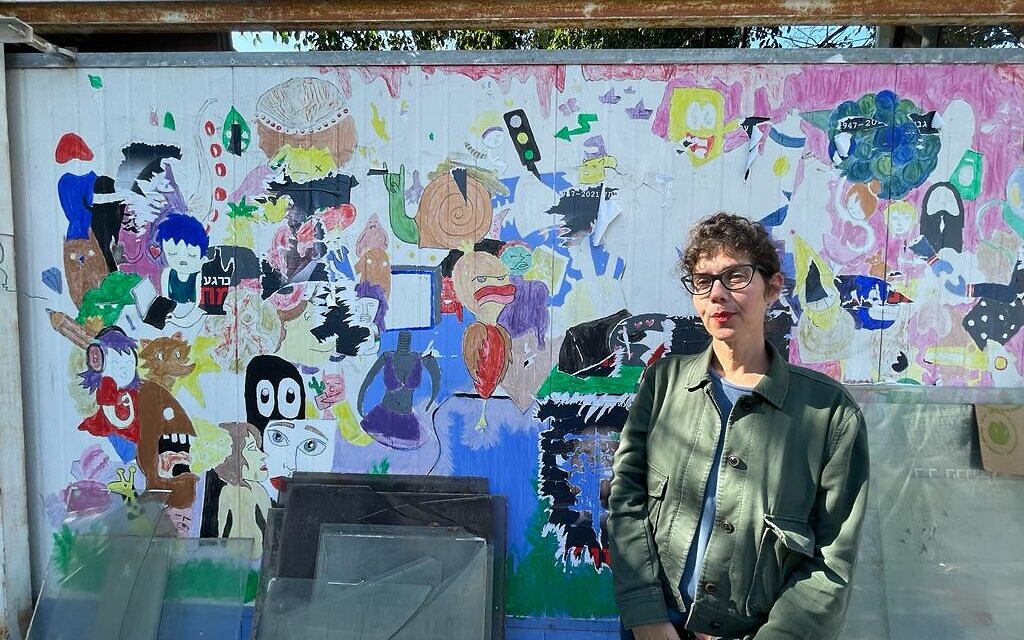 Ronit Aldouby stands in front of the gate to her Givat Amal home, November 23, 2021. (Carrie Keller-Lynn/Times of Israel)

“It’s terribly sad —  that instead of waiting a minute for the framework and then evacuating when everyone is happy, they did it in a very ugly manner,” said Lasky’s spokeswoman.

Lasky and Lazimi had succeeded in budgeting NIS 30 million ($9.7 million) for residents, as part of coalition agreements. The funds, however, are currently frozen in the Finance Ministry.

A spokesperson for the ministry declined to comment on the matter, citing “legal proceedings.”

Government compensation has been paid to evictees in the past when the state held a level of responsibility, such as evacuations of settlers in the West Bank or Gaza. “If this were settlers, this issue would have been squared within hours,” Lasky charged in a recent interview with Army Radio. 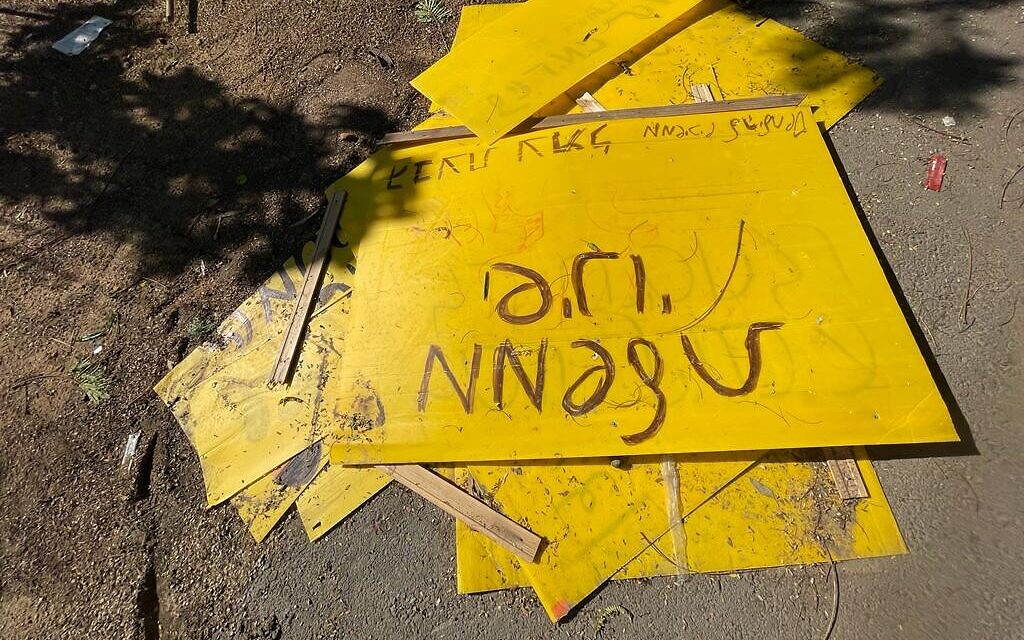 After being evacuated, residents were offered accommodations at the Abraham Hostel, a modest facility in south Tel Aviv, though they say they had been led to believe Tshuva would put them up at the Kfar Maccabiah Hotel in Ramat Gan for a month.

“It’s a weird place,” Smucha said of the hostel. “I told [Tshuva’s representative], ‘You’d take your parents there? My parents, I’m not taking them to such a place.’”

In the end, her elderly parents are staying at her home: an 85-square-meter (915 square-foot) apartment in Ramat Gan. She and her mother are sleeping in the living room; she gave her father her bedroom.

“We live cramped, but I wanted to give them comfort — so they could be somewhere and have that somewhere be safe.”

Other community members are staying with family, or in rented apartments.

“Everyone is scattered to the winds,” Ronit Aldouby reflected, leaving her former home. “We’re a community that was destroyed.”