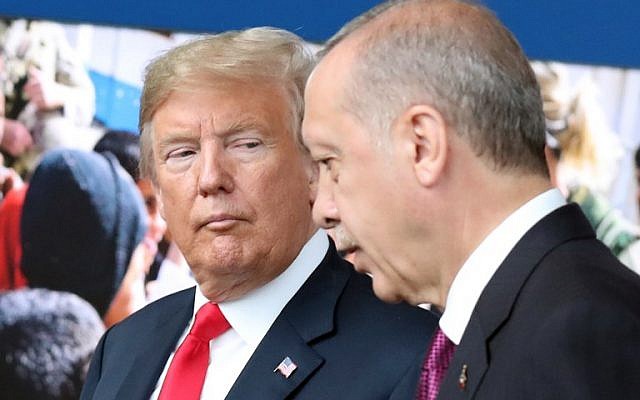 US President Donald Trump (L) talks to Turkey's President Recep Tayyip Erdogan (R) as they arrive for the NATO summit, at the NATO headquarters in Brussels, July 11, 2018. (Tatyana ZENKOVICH/AFP)

Turkey’s President Recep Tayyip Erdogan rejected the unusual letter he received from US President Donald Trump warning him against a major military campaign in Syria, tossing it into the trash, the BBC reported Thursday.

“President Erdogan received the letter, thoroughly rejected it and put it in the bin,” Turkish presidential sources told the broadcaster.

That same day Turkey launched an offensive against Syrian Kurds with airstrikes, artillery bombardments and later forces crossing the border.

Trump cajoled and threatened Erdogan in the letter sent last week, dated October 9, the day the Turkish operation began. In the missive, the US president warned his Turkish counterpart to not “be a fool” and that he risked history branding him a “devil.”

White House confirms authenticity of Trump letter to Erdogan, dated 10/9: “History… will look upon you forever as the devil if good things don’t happen. Don’t be a tough guy. Don’t be a fool! I will call you later.”
First reported by Fox Business. pic.twitter.com/lImxfhb2j1

Three days after appearing to green-light an invasion by pulling US troops from the Kurdish-dominated region, Trump told Erdogan he would wreck Ankara’s economy if the invasion went too far.

In language shorn of diplomatic niceties, Trump began with an outright threat. 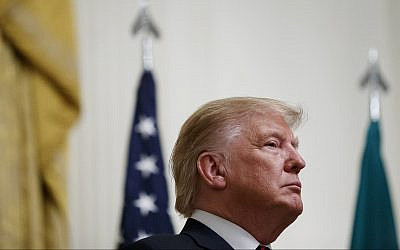 US President Donald Trump during a reception in the East Room of the White House, in Washington, October 16, 2019. (Alex Brandon/AP)

The US leader told Erdogan a “great deal” was possible if he negotiated with the head of the Kurdish-led Syrian Democratic Forces, Mazloum Abdi, whom Turkey has labeled a “terrorist” for his ties to the Kurdish PKK militants in Turkey.

Since its launch the Turkish offensive has killed dozens of civilians, mostly on the Kurdish side, and prompted at least 160,000 to flee their homes.