Nir lost part of his leg but can now jog around thanks to his prosthesis. Billy has his own wheelchair. Gali, who is blind, has been reunited with her mother Angela. And Roni was rescued from a ritual sacrifice and now loves nothing more than to jump on the trampoline and make mischief.

These five animals rescued from the livestock industry are living out their days being loved and pampered at the Freedom Farm in Moshav Olesh, on central Israel’s Sharon Plain.

They are among the 200 or so cattle, goats, sheep, rabbits, chickens, turkeys, geese, donkeys and ducks that are being rehabilitated and introduced to the public through guided tours (currently on Zoom) as part of an educational initiative to raise awareness about the environmental, health and moral downsides of the livestock industry.

On Sunday — World Vegan Day — Freedom Farm was in the midst of a 36-hour online fundraising campaign to raise NIS 250,000 ($73,000) toward next year’s food bill. This will help to compensate for this year’s drop in income caused by a COVID-19 related reduction in visitors and gifts.

Freedom Farm was the brainchild of two women who had had nothing to do with animals or veganism until by chance, they both (separately) saw a film by Gary Yourofsky, a Jewish American campaigner for veganism and animal rights.

“I had been an entrepreneur and businesswoman for 20 years,” Adit Romano told The Times of Israel. “Around seven and a half years ago, I saw a lecture by Gary Youroufsky. I learned about the implications for the environment and health of the livestock industry, but what turned my stomach was the cruelty. From that point on, I couldn’t rest. I became a vegan. I started to volunteer at a vegan not-for-profit, where I met Meital Ben Ari, who at that time was an economist in high-tech. She had seen the same lecture and gone from being an omnivore to a vegan overnight.

“Then one day, I saw a clip about an animal sanctuary that showed young people playing with the animals and it was a Bingo moment! I realized that if people could meet the animals and look them in the eye, just as they do with their cats and dogs, we could bring about change.”

When Romano decided to create the sanctuary, Ben Ari, who had the same idea, asked to join. 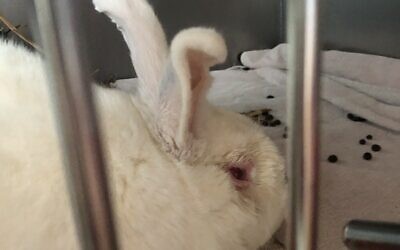 Two years later, in October 2016, after overcoming a mountain of bureaucracy, raising initial funds and rescuing the first few animals, the two opened Freedom Farm. It survives on donations.

The farm has given its growing roster of animals five-star accommodation, including an air-conditioned room for those that suffer from the heat. The farm is quiet and peaceful, impeccably clean and has no smell.

Roni the kid goat was rescued after an April Facebook post revealed that he was on his way to be sacrificed at the Temple Mount in Jerusalem as part of a ritual that was customary on Passover in ancient times. Each Passover, messianic Jews try to smuggle animals onto the Temple Mount for the purpose, despite a ban to prevent provocations on the sensitive site. 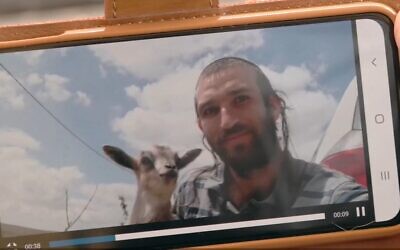 The Facebook post that showed the kid that was going to be slaughtered in a religious ritual on the Temple Mount that eventually brought the animal, now called Roni, to Freedom Farm. (Facebook)

After an outcry on social media, the post’s author, Raphael Morris, chairman of the “Return to the Temple Mount” movement, was stopped by police and the kid — less than a month old, and still with its umbilical cord — was transferred to the Jerusalem city vet.

Alerted, Freedom Farm workers drove to pick up the animal — now called Roni — and subsequently invited the Morris family to the farm for what Ben Ari described as a “very respectful and tolerant exchange of views.” 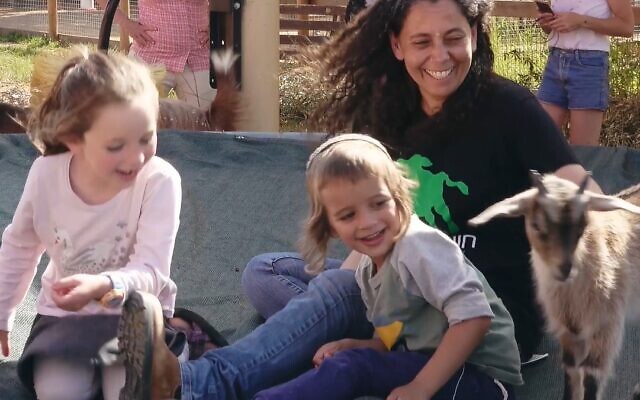 Some of the Morris children enjoying a romp with Roni on the trampoline at Freedom Farm. (Courtesy, Freedom Farm)

Said Ben Ari, “Now, Roni’s the craziest animal on the farm! He lives life to the full, jumping on the trampoline, eating the chickens’ food, and getting into all the places he’s not supposed to.”

Perhaps he’ll learn some tricks from another goat called Hava, who has learned to open doors with the most complex of handles, or from Billy (below), who gets around just fine thanks to his wheelchair. 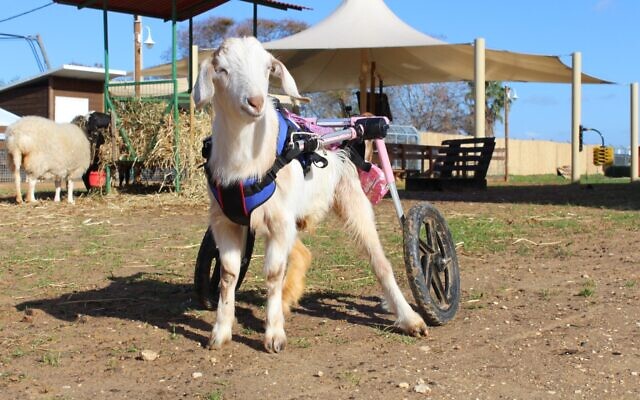 Billy the kid shows off his wheelchair. (Courtesy, Freedom Farm)

Yossi the pig, bred to grow so fat, it hurts him to walk

Freedom Farm also has four pigs, “the most clever and sensitive animals,” according to Ben Ari.

“They arouse the most excitement among our visitors, perhaps because they are so human. They share 95% of our DNA, which is why they are so much in demand for experiments. Around 220,000 pigs are slaughtered each year in Israel, half for meat, half for experiments, but they’re hidden from view and it’s very hard to rescue them.” 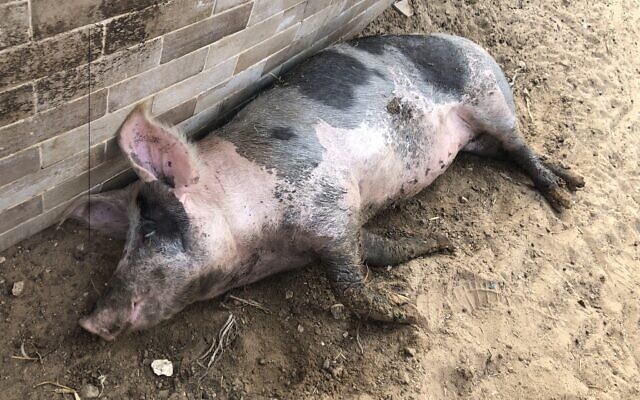 Orit, who loves to have her tummy scratched, enjoys a siesta at Freedom Farm, November 1, 2020. (Sue Surkes/Times of Israel)

She continued, “We managed to rescue Dikla and Orit when they were piglets. They were so frightened when they arrived. In the industry, when they get to ten days to two weeks in age, the workers remove their teeth so they can’t bite one another in the crowded conditions, cut their tails, which, like dogs, they use to communicate, and castrate the males, because it apparently makes the pork tastier, and all without anesthetic. They’re usually slaughtered at around four months, by which time, thanks to genetic manipulation, they weigh 100 kilograms (220 pounds). And if they live, the females will spend weeks each year locked up and unable to move in farrowing crates.” 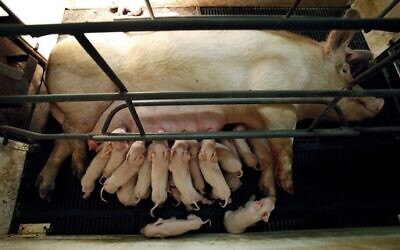 When Yossi arrived, he was almost dead. Even today, on a very strict diet mainly of salad, he is so overweight that his legs hurt when he walks and he gets painkillers every day.

Yossi shares his stall with Omri, outside of which is a mud bath. Pig skin is similar to that of humans and burns easily in the sun. Mud is the porcine equivalent of sunscreen and also helps them to cool down as they cannot sweat. 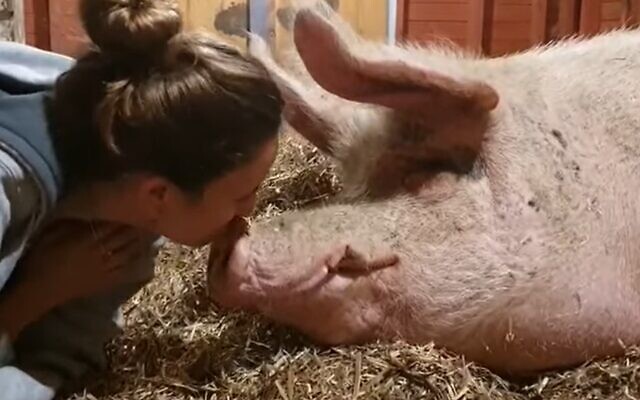 A kiss for Yossi the pig from an admirer. (Courtesy, Freedom Farm)

Some of the hens and roosters at Freedom Farm have been rescued from Kapparot ceremonies performed on the eve of the Day of Atonement by some Orthodox Jews. Each penitent swings a live chicken over his head three times before slaughtering it in a symbolic transfer of sins to the bird.

Genetic manipulation has produced two different varieties in the poultry industry — those that lay eggs, and those reared for meat. In both branches, newly born chicks  are sorted and those not suitable (males in the egg industry, or weaklings born to the meat one) are thrown live into crushing machines — around 15,000 of each type in Israel every year. 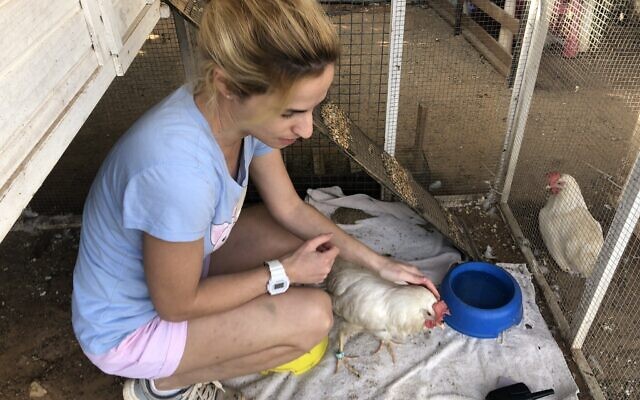 Danielle Meiri, head of Animal Care at Freedom Farm, looking after Mandy, a hen rescued from the egg industry who has chronic problems with her immune system. (Sue Surkes/Times of Israel)

The females that go on to become egg layers have their beaks — the main limb with which they interpret the world —  clipped to stop them pecking one another in cages so tightly packed that they cannot spread their wings and have to stand on metal wire, which injures their feet.

Before there was genetic manipulation, a hen would lay up to 30 eggs a year. In today’s livestock industry, they are expected to lay 300 annually. After a year, when they start to lay less, they are starved for ten days to trigger more laying. Then after two years, the Poultry Breeders’ Association electrocution truck arrives, and the entire flock is exterminated, to be replaced by a new one. 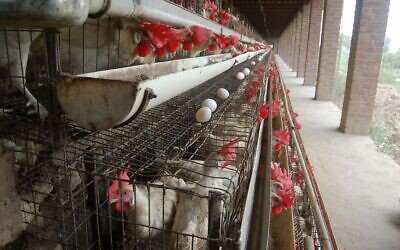 The male and female chickens rescued from the meat industry bring other problems.

“They are bred to grow as big as possible as quickly as possible,” Ben Ari explained. “Their bodies become so big that they can no longer stand, but their hearts don’t grow, so that they often die of heart failure before they get to slaughter, at 40 days. Those whose legs have given way are just thrown to the side to die.” 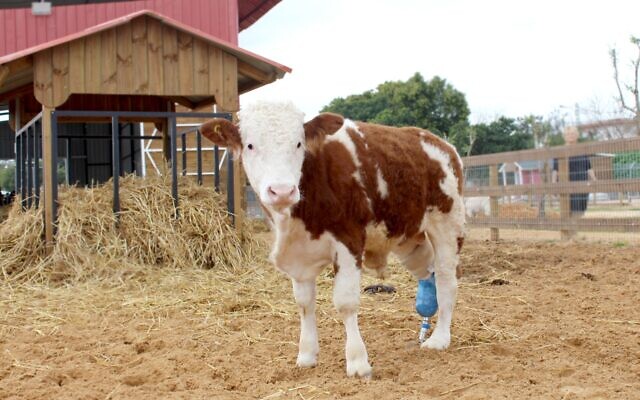 Gali the blind calf, now reunited with her mother

Gali was a 14-day old blind calf, too thin to be sold for meat, when her owner suggested that the farm take her in. Two years later, the farm managed to locate and rescue Gali’s mother at the same dairy. The mother, now known as Angela, had given birth five times and was pregnant with twins, which she subsequently aborted. She had developed an infection which affected her milk and was destined to become meat.

Explained Ben Ari, “Like all the dairy cows, she came to us very ill. She had an infection in her womb. It took us eight months to rehabilitate her. The dairy farms take the calves away from the mothers as soon as they are born, so she didn’t recognize Gali. But a connection developed between them and today, she’s the only cow that loves and wants to be with Gali.” 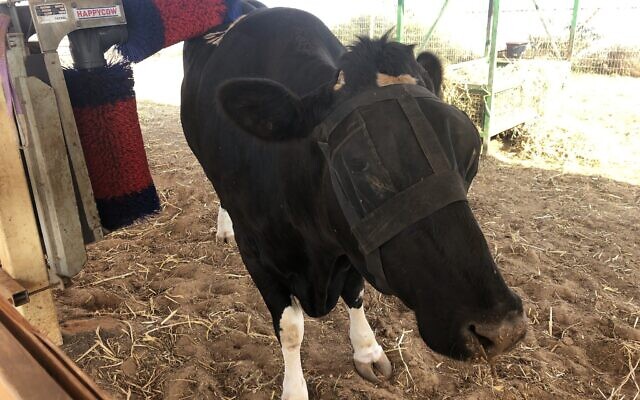 Gali, now grown, enjoys a scratch from the Happy Cow machine. The net over her eyes keeps the flies away. (Sue Surkes/Times of Israel)

Danielle Meiri, who heads the animal care team, said, “The idea of the farm is not to absorb as many animals as possible because resources are limited. The idea is that every animal that does come can be an ambassador for those left in the industry.”

Added Ben Ari, “It’s so exciting when the children come. We explain how similar our animals are to their dogs and cats and they tell us stories about their pets. They really relate. One child got close to Omer, the blind goat, and explained how hard it must be to be blind, how much Omer must still want friends and want to be understood and loved. We’re so moved that we spend a lot of our time in tears.”

Those wanting to donate, visit or volunteer can do so via Freedom Farm’s website or Facebook page.