Over nearly four decades, Israeli underwater photographer Amos Nachoum has taken award-winning images of wildlife, some with fearsome reputations, from killer whales to great white sharks. Yet in that span, one subject eluded him — the polar bear.

Nachoum’s efforts to photograph this alpha predator in the ocean are shown in a new documentary film, “Picture of His Life,” by acclaimed Israeli duo Dani Menkin and Yonatan Nir, who served as directors and producers. Shot on location in the Canadian Arctic, the film’s US premiere was July 25 at the San Francisco Jewish Film Festival, with a follow-up screening July 28 and a separate screening in San Rafael on August 2. Earlier this year, the film debuted at Docaviv in Tel Aviv, with Nachoum attending the screening.

“Picture of His Life” is a partnership between the filmmakers and writer/producer Nancy Spielberg, who signed on as executive producer. Forty-four years ago, her brother Steven made marine wildlife terrifying in “Jaws.” In an interview with The Times of Israel, Menkin quipped that instead of “Jaws,” his film is about “Jews,” with four Members of the Tribe traveling into the Arctic — himself, Nachoum, Nir and celebrated underwater cinematographer Adam Ravetch. The filmmakers see “Picture of His Life” as a corrective to “Jaws,” showing that fearsome fauna can be beautiful.

There’s the leopard seal, which Nachoum, 65, has photographed pursuing an unfortunate penguin off an Antarctic peninsula. There’s the snow leopard, which frolics at death-defying heights atop the Himalayas. The anaconda, the crocodile, the great white — it’s all in a day’s work. 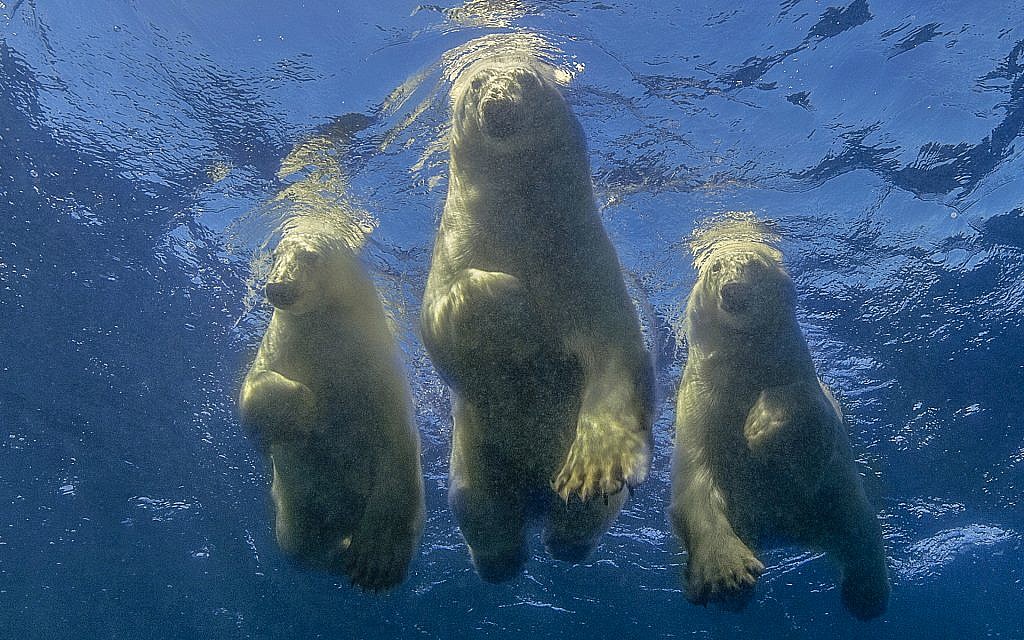 Asked about his favorite locations, Nachoum told The Times of Israel, “I don’t have a [favorite] place. Planet Earth is the perfect place to shoot or film. Each [location] is so different, so unique. I have probably the widest selection of wildlife photography of almost anyone I know on the planet.”

His subjects, widely considered dangerous, are themselves in danger from human activity, even the polar bear, Nachoum said. He has taken poignant images of animals affected by pollution, such as a mother orca and her dying calf.

“We see it more and more,” he lamented.

In the film, colleagues attest to his skill, including marine biologist Sylvia Earle (who made history at the National Oceanic and Atmospheric Administration when she became its first female chief scientist) and underwater explorer Jean-Michel Cousteau, whose father Jacques was the famed captain of the Calypso. Consider, also, the subjects of his photos. Despite their teeth and claws, they are willing to be photographed as long as Nachoum obeys certain guidelines.

“Be calm and collected with wildlife,” Nachoum said. “The biggest mistake all photographers do is be quite aggressive.”

The biggest mistake all photographers do is be quite aggressive

Calmness is important even when photographing the polar bear — which can include Homo sapiens as part of its diet. Males can weigh up to 750 kilograms (1,653 lbs) and their swimming and diving prowess nearly proved deadly for Nachoum on his first attempt in 2005 to photograph a polar bear in the ocean. 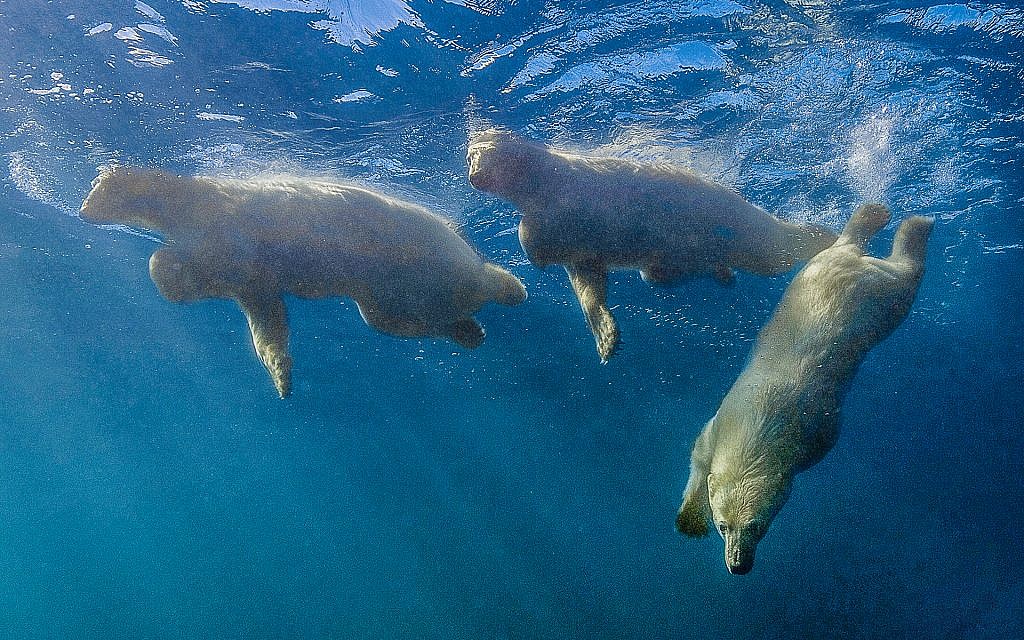 “I was scared to death,” he recalled. “I was laughing about it, but I was scared. My heart was pounding.” Yet, he said, “I wanted to do it again.”

His second attempt, in 2015, helped Menkin and Nir culminate what they describe as a 10-year odyssey to make the film.

“It took us a long time,” Menkin recalled. “In between, we had to stop and raise money. It was a very big budget undertaking to go to the Arctic.” 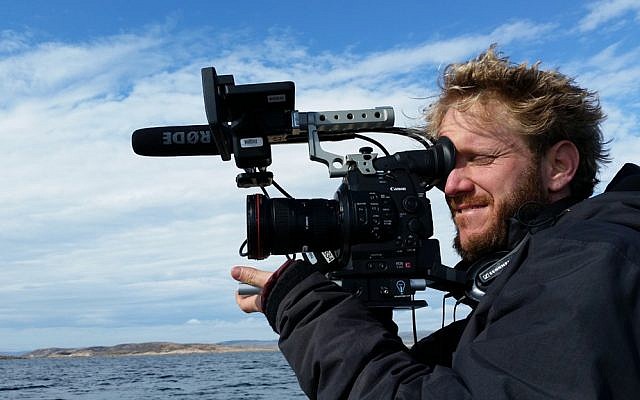 “I was really interested by his career,” Nir said. “He’s really famous. But no one really knows him. He does not expose that much. He talks about his philosophy, not so much about his personal life.”

When they asked Nachoum for details, he pointed them to others who could give insight — his father and sisters; his fellow army veterans; and colleagues such as Earle, Cousteau and Ravetch.

Nachoum’s family provided nuance — including his complex relationship with his father, who wanted young Amos to become a carpenter and was dismayed that he did not start a family. Younger sister Ilana saw a similarity between her brother’s relationships with his father and the polar bear. 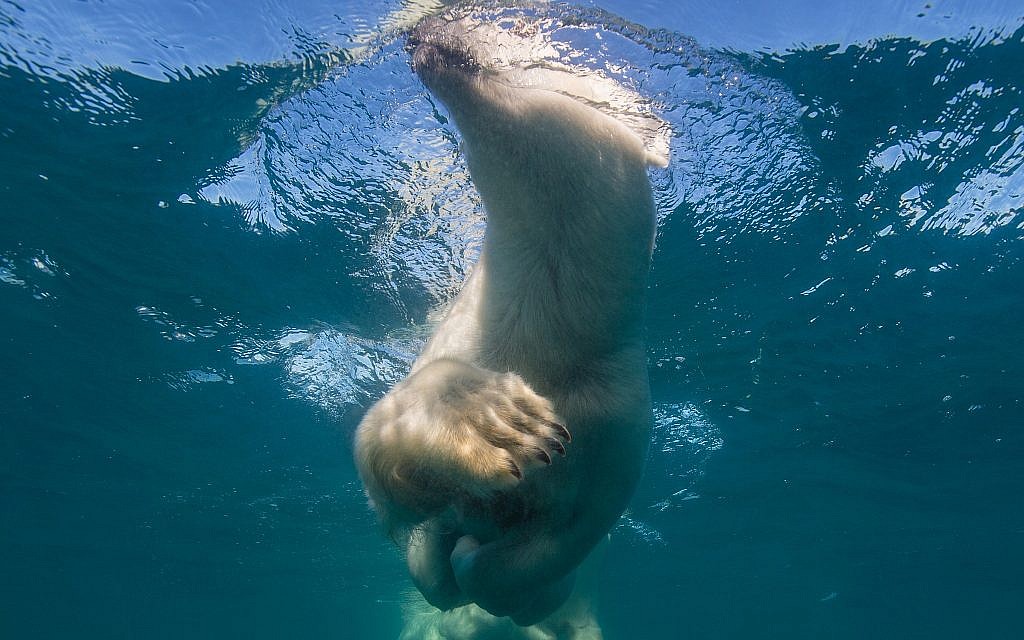 A polar bear ‘shaking hands’ in the Arctic. (Amos Nachoum)

Amos Nachoum says, however, “I have never seen the polar bear as my father. It’s her view. I have to respect it. She is very thoughtful, more spiritually involved than me. I don’t see my father in the polar bear. I see a polar bear, an animal I wanted very much to photograph. I liked [thinking of] ice in the [Israeli] desert.” 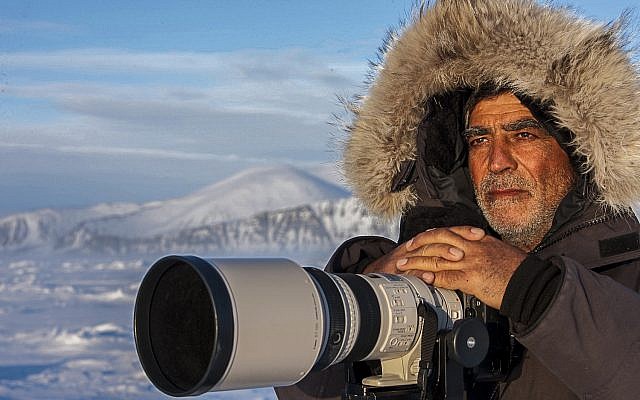 Earlier in life, it was another desert — the Sinai — in which Nachoum endured traumatic experiences. He said that he served in “one of the top units” during the 1973 Yom Kippur War, and described the battle of Chinese Farm in the Sinai Peninsula near the Suez Canal as “very, very costly,” “very tough,” and resulting in the loss of “many men.” Speaking about his service still left him “very emotional, my hair standing still,” he said.

In Israel, he had been a war photographer, as well as a fashion photographer. He learned to work in the water before and during his military service. (On his website, he lists a near-drowning in Yafo at five years old as instilling a lifelong relationship with the water.) In 1978, he went to the US to learn to film underwater. Eventually he went into the diving business, “taking my camera with me,” he said. “I started taking pictures. More people responded to it kindly. It evolved from there.” 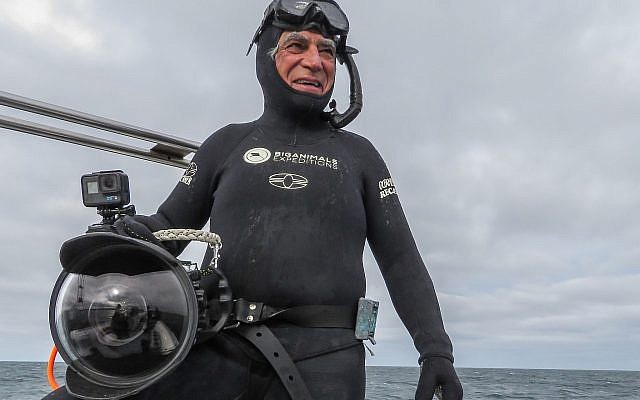 After a decade, he realized that he needed to find a niche. He decided to capture images of not just big animals, but their behavior, from a great white using its tail to hunt, to a snow leopard playing atop a mountain.

“I set myself out to do the cutting edge of wildlife photography,” he said.

Nachoum has received multiple awards, including from Nikon and the BBC (the latter twice honored him as Wildlife Photographer of the Year in the category of animal behavior). In 2005, Nir became interested in his story and reached out to Menkin. 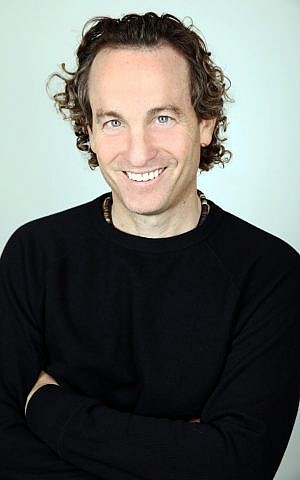 “[Menkin] was already a director with some very strong films behind him,” Nir said — including the Israeli Academy Award-winning “39 Pounds of Love.”

Nir said that “it could be a great idea to make a film” about Nachoum, yet there was a problem — “we realized the budget for the film was too high.”

He and Menkin shelved the project and worked on other films — including “Dolphin Boy,” a 2011 study of an Arab boy traumatized by violence and undergoing dolphin therapy. It allowed Nir, a former diving instructor and photojournalist, to showcase his skills telling stories beneath the ocean surface. Eventually, he and Menkin were able to return to their idea of a film about Nachoum.

By that time, Nachoum was ready for another attempt at photographing a polar bear. The filmmakers accompanied him into the Arctic, a journey of thousands of miles north. The film reflects the inhospitable terrain — cold weather, swarms of mosquitoes and the constant threat of the very creatures Nachoum wanted to photograph; news clippings attest to deadly encounters between humans and polar bears.

The filmmakers benefited from experts from the indigenous Inuit population, namely the Kaludjak family, who served as guides. Head guide Joe Kaludjak kept the team together. His family, bemused by the filmmakers’ bountiful ramen supply, caught fish and dried them to keep everyone fed. Cinematographer Ravetch filmed Nachoum diving off the Kaludjaks’ boat in his quest for the polar bear. 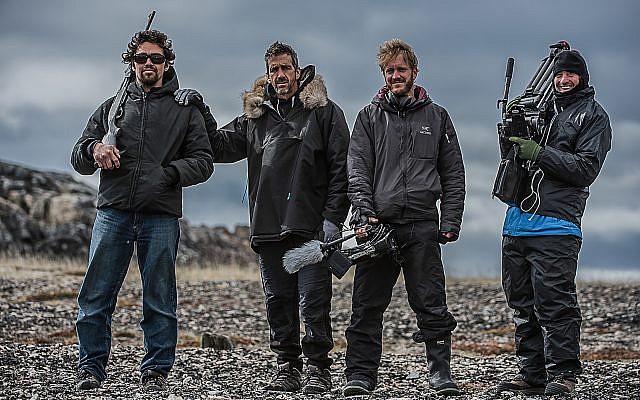 It was a race against time due to the weather and budgetary constraints: Nachoum had just five days to record his images. On day four, he nearly succeeded when he spotted a polar bear in the water. Yet it became a reprise of his unsuccessful 2005 attempt, with the team needing to rescue him when the bear turned aggressive.

At that point, Nachoum turned to his longtime experience with Mother Nature to keep the faith.

“I’ve spent so many years in the field,” Nachoum said. “The truth is, I’ve never failed to see the animal, engage the animal.”

On this particular quest, “there was a lot at stake to get to the end, a lot of money and hope on the line. They [the filmmakers] were very anxious.” But, he added, “I understand humanity. I trust the universe. Something was going to happen. It was not over. You only have to hope for the best.” 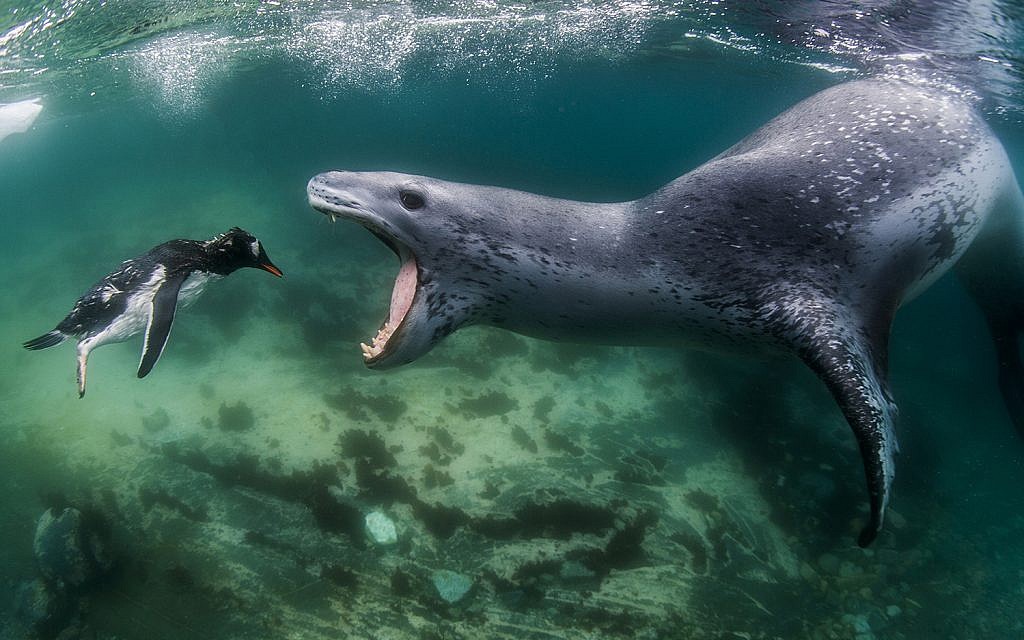 It’s up to viewers to find out whether this faith gets rewarded on the final day of the expedition. Since then, Nachoum has continued taking photos underwater, including an unsuccessful attempt beside the biggest animal on Earth.

“I spent two weeks off California and I did not get any pictures of a blue whale at the time,” Nachoum said. “Quite often, I come away empty-handed. How many people are willing to do this? Most people are not willing. My images speak loudly.”

The final moments of the film have a bittersweet quality. Two members of the Kaludjak family — Joe’s son Billy and brother Patrick — died in a snowmobile accident in 2017, and the film is dedicated to them. Nachoum’s father died while the film was being made and there is a heartfelt tribute to him as well. 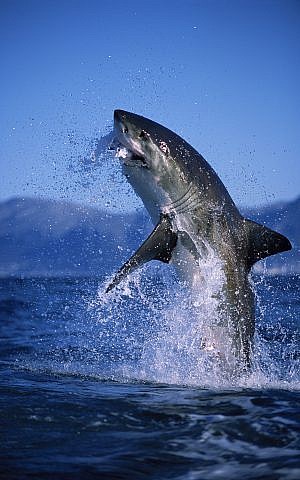 Wildlife continues to be threatened by human activity and Nachoum continues to witness this — from collisions with vessels, to entanglements in fishing nets, to consumption of poisoned krill and algae.

Yet as the film shows, nothing can stop him from his work.

“My niche, my passion, my joy, my challenge, it is wildlife, on top of land or in water,” Nachoum said. “I wanted to get in the business as being recognized or realized as a wildlife photographer” of “mostly threatened or endangered” animals, to “create a legacy, to do anything to keep them protected.”

Should the worst happen, he said, “at least the younger generation can see how gorgeous the creatures of the planet were.” 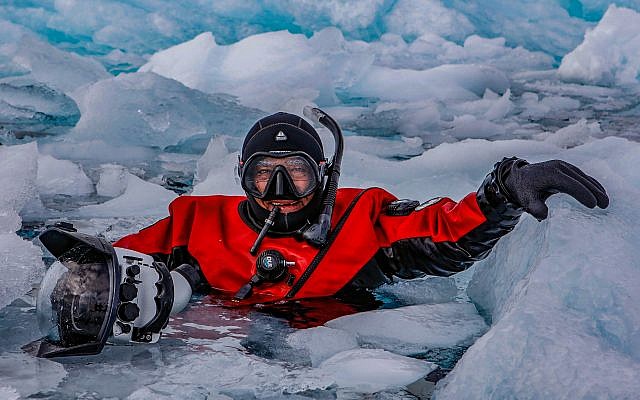 Wildlife photographer Amos Nachoum amid the ice. (Keding Zuh)
I'm proud to work at The Times of Israel