LONDON — When Julia Neuberger was a child in 1950s Britain, anti-Semitism was rarely a topic of conversation. The occasional reference would come when, driving his family around in their “shabby Ford Popular,” her father would suggest that the traffic signals were anti-Semitic if they encountered a run of red lights.

Of course, anti-Semitism was no laughing matter: Neuberger’s mother escaped Nazi Germany before the war but most of her family wasn’t so fortunate and died in the camps. Her father’s grandmother found temporary refuge in the Netherlands, but later perished in Sobibor.

But, as she writes in her new book, “Antisemitism: What It Is, What It Isn’t, Why It Matters,” her father’s jesting comments reflected the fact that, for Jews, postwar Britain felt safe, accepting and tolerant.

While Britain is a more liberal, multicultural and diverse country than it was half a century ago, many Jews would hesitate before making such a claim today.

“The music has changed,” as Neuberger puts it.

It is this shift that lays at the heart of her short, highly accessible book. Her audience, she says, is non-Jews who’ve seen claims of anti-Semitism in the opposition Labour party repeatedly hit the headlines. She aims to explain “what anti-Semitism really is.”

In particular, she seeks to wrestle with the question of whether criticism of Israel is in itself anti-Semitic.

It’s a task Neuberger is well-placed to undertake. The first female rabbi in Britain to run her own synagogue, she is one of the most prominent and well-known Jews in the country. To describe Neuberger simply as the senior rabbi at the West London Synagogue hardly does her justice. She is also a regular broadcaster, the chair of a number of public bodies, and a member of the House of Lords. 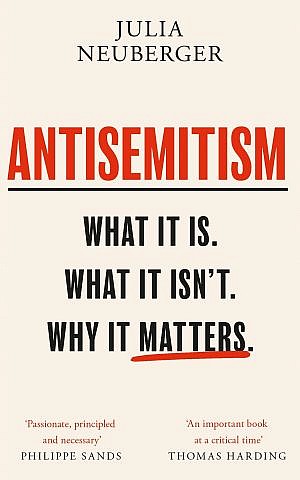 ‘Antisemitism: Why it Matters,’ by Rabbi Julia Neuberger. (Courtesy)

Despite its brevity, Neuberger’s book is wide-ranging. In 150 pages, she criss-crosses the landscape of anti-Semitism, taking in, among other things, its roots in the ancient world; Christian and Islamic anti-Semitism; the “scientific racism” of the late 19th century; the Nazis and their contemporary “white nationalist” heirs; Jew-hate in the modern Muslim world; and, of course, the controversies which have rocked British politics over the past three years.

“I wanted to give people a bit of history,” she says. “I wanted to really get people to understand that it’s the oldest hatred, but it morphs.”

That its latest incarnation is in the Labour party — once the natural home of many British Jews and a party with a long and proud history of fighting racism — is nothing short of shocking for Neuberger.

After recounting the multiple incidents of anti-Semitism which have afflicted the party since the election of its hard-left leader, Jeremy Corbyn, in 2015, Neuberger writes despairingly: “My Labour-supporting parents would be turning in their graves.”

Neuberger was herself a longtime Labour member before quitting to help form the centrist Social Democratic party in the early 1980s. After running as a parliamentary candidate, she was appointed to the House of Lords where she sat for the SDP’s successor party, the Liberal Democrats. She subsequently became an independent when she took up her post at the West London synagogue.

She describes her feelings at Labour’s descent under Corbyn as “quite a big sense of betrayal.”

“My parents were both Labour party members. I was a Labour party member for many years. In that sense, it’s quite personal because that’s where I come from,” she says. “But that doesn’t make me unusual among the Jewish community. It’s the sense that where you felt you belonged, where you felt you were totally accepted and you were part of the corporate whole, has somehow turned against you, not as an individual but as a community.”

Neuberger is, though, reticent about labeling Corbyn an anti-Semite. 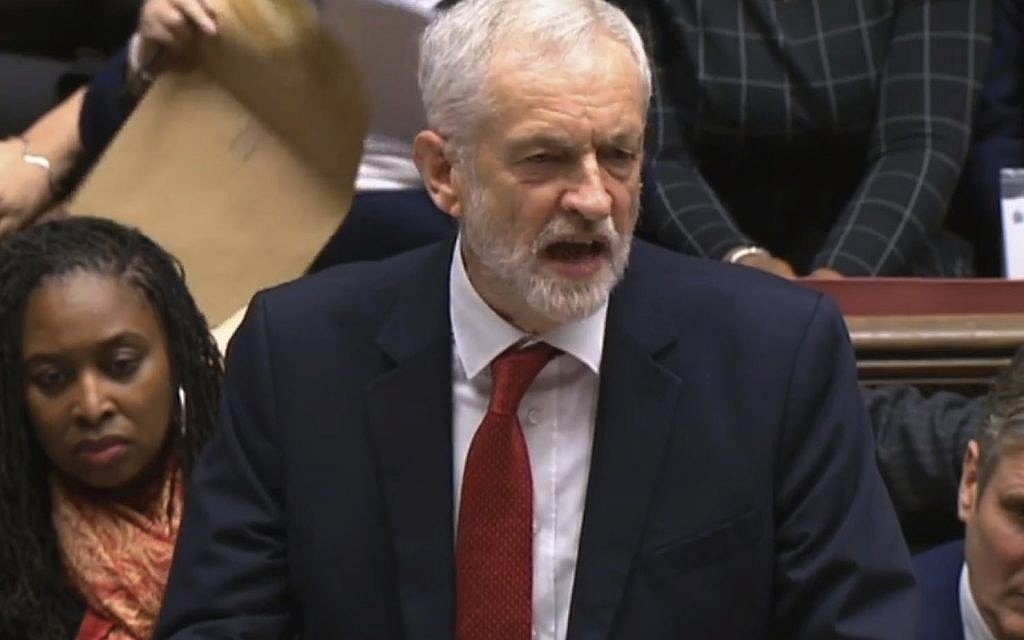 Illustrative: Labour leader Jeremy Corbyn speaks after Britain’s Prime Minister Theresa May lost a vote on her Brexit deal in the House of Commons, London, Tuesday January 15, 2019. (House of Commons/PA via AP)

“I have no idea whether he is actually an anti-Semite, but he certainly behaves as if he is one,” she says. “I don’t know whether deep in his heart he holds strong anti-Semitic views. How can I know? I don’t know the guy — but with some of the things that he has said, and some of his attitudes that have been demonstrated, he behaves like one.”

Neuberger exercises restraint when addressing claims that a Corbyn government may pose an “existential threat” to the Jewish community.

“I really don’t know, because I think it would depend on the makeup of that Corbyn government,” she says. “I think it’s a bit difficult to make sweeping generalizations like that.”

But, she continues, “would it make a lot of Jews very anxious? Yes, absolutely.”

Will anti-Semitism move the ballot box?

Neuberger’s response to Corbyn’s troubling reputation reflect the fact that the book strains to be fair and avoid alienating its readers by overstating its case.

“I think sometimes some parts of the Jewish community go mad. It’s a bit like ‘reds under the bed’; it’s anti-Semites in every corner,” Neuberger says. “And that’s not true: Britain is still a very good place to live as a Jew.”

She is, moreover, cautiously optimistic about the public’s response to the Labour anti-Semitism crisis. 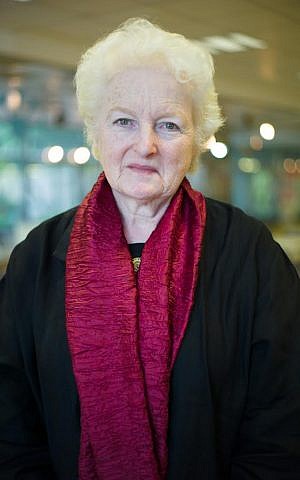 “What has been interesting — it’s hard to know whether this is right — is that [the claim of anti-Semitism in the party] does seem to have had some effect at the ballot box. We don’t know that for certain, but it does seem to maybe have done so,” she says.

But, Neuberger warns, “until you get evidence that the nation just says: ‘We’re not going to vote Labour while these guys go through all of this,’ [then] I think it’s fairly disturbing for the Jewish community which hasn’t really felt… this kind of stuff since the late 19th century.”

For all her feelings of unease, Neuberger writes that she remains “comforted by my optimistic and passionate belief in the fair-mindedness of my country, and of the British people.”

That belief has been buttressed by the “glimmers of light” she detects: the growing closeness between parts of the Muslim community and Jews in some areas; the public support shown to the Jewish TV presenter Rachel Riley in the aftermath of the abuse she received on social media for calling out anti-Semitism in the Labour party; and the decision of the Royal Mail to shelve plans to issue a commemorative coin in honor of the popular children’s author Roald Dahl who spouted increasingly anti-Semitic views in later life.

Neuberger has, though, harsh words for the failure of parts of the anti-racist movement to stand by the Jewish community.

“I think they’ve been hopeless because they simply don’t really recognize anti-Semitism as racist. Not all of them — there’s plenty of people who are anti-racist who are also opposed to anti-Semitism — but the fact that [some] can’t see it’s just as racist to be anti-Semitic as it is to be anti-black or Islamophobic is just absurd.”

This blindness, she argues, stems from a “lack of empathy and imagination.”

“I think [they] are governed by a set of beliefs that says people who are victims of racism are poor or deprived. Jews don’t look like a poor or deprived community. The heartstrings don’t get pulled,” Neuberger says. “What they don’t get, and I think it’s really important, is that it’s only a generation ago for many of us that our parents had to leave wherever it was. In my case, my mother left Germany because of anti-Semitism. It sure as hell felt like racism.”

It is Corbyn’s anti-Zionist ideology and frequent attacks on Israel which lay at the heart of the turmoil Labour has experienced under his leadership. As Neuberger writes, the frequent question posed to her — “But surely you don’t believe that all criticism of Israel is anti-Semitic?” — is both “patronizing” and “obviously phrased so that all civilized, right-minded people would answer ‘no’ and ‘of course not.’” 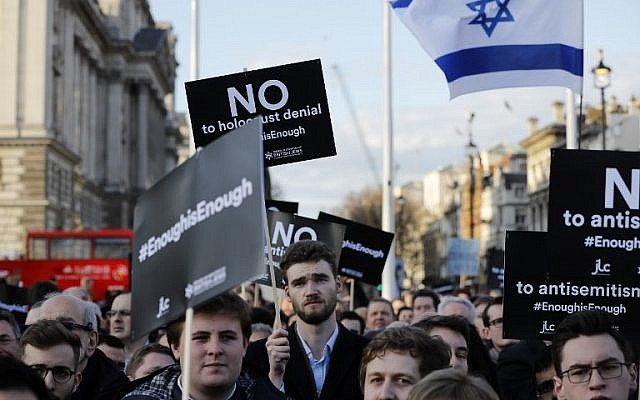 Members of the Jewish community hold a protest against Britain’s opposition Labour party leader Jeremy Corbyn and anti-Semitism in the Labour party, outside the British Houses of Parliament in central London on March 26, 2018. (AFP PHOTO / Tolga AKMEN)

But, she continues, while much criticism of Israel “does not stem in any way from anti-Semitism… there is a substantial and growing anti-Semitic component in the criticism which has been manifesting itself more and more frequently in the spreading of stories that are simply untrue, by ignoring evidence and by drawing conclusions that are willfully unbalanced.”

It is for this reason, Neuberger argues, that it is not enough to simply attempt to make a distinction between criticizing Israel’s right to exist, “which cannot be seen as anything other than anti-Semitic,” and criticizing the actions of its government.

“Of course, it’s legitimate to criticize Israel,” Neuberger says. “Every state is open to criticism and should be. But if you’re only focused on Israel, if you can only talk about yourself as an anti-Zionist, and you never criticize Burma, the Democratic Republic of Congo or Hungary, then I think you’ve got a problem.”

“The reason it’s difficult to say ‘this is anti-Semitism and this isn’t anti-Semitism, this is criticism of Israel,’” Neuberger believes, “is because it depends on the context. It depends on whether the person doing the criticizing has a record of criticizing other countries for the same sorts of things in the same tone of voice.” 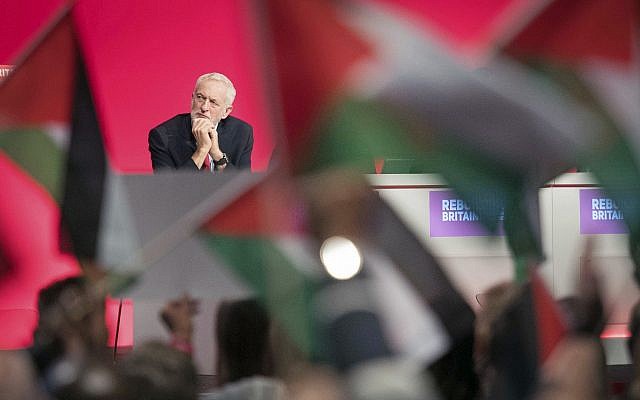 But Neuberger doesn’t believe that the far left is by any means the sole source of anti-Semitism in Britain. There is, she warns, “a far greater danger of violence from the far right than from the far left.”

She is also clear that the rise in anti-Semitic incidents since 2016 recorded by the Community Security Trust, which monitors anti-Semitism and protects Jewish venues, is connected to the Brexit referendum three years ago.

“It’s all about what the sociologists call ‘othering,’” she explains. “The result licensed expressing views that had been unsayable before. I think it’s done quite a lot of damage. It licensed a form of nationalism, anti-immigrant, ‘anti-other’ that is very unpleasant.”

Is May also to blame?

Neuberger does not let Theresa May, who is due to step down from her post as prime minister this week, entirely off the hook.

May has been “a great supporter of the Jewish community,” says Neuberger, though she also faults May’s tough line on immigration during her stint as Home Secretary.

The so-called “hostile environment” policy, says Neuberger, “plays very badly with Jews who remember either literally or generationally what it was like to be an asylum-seeker.” The policy, she charges in the book, “has in itself both reflected and probably led to an increased xenophobia and mistrust within communities.” 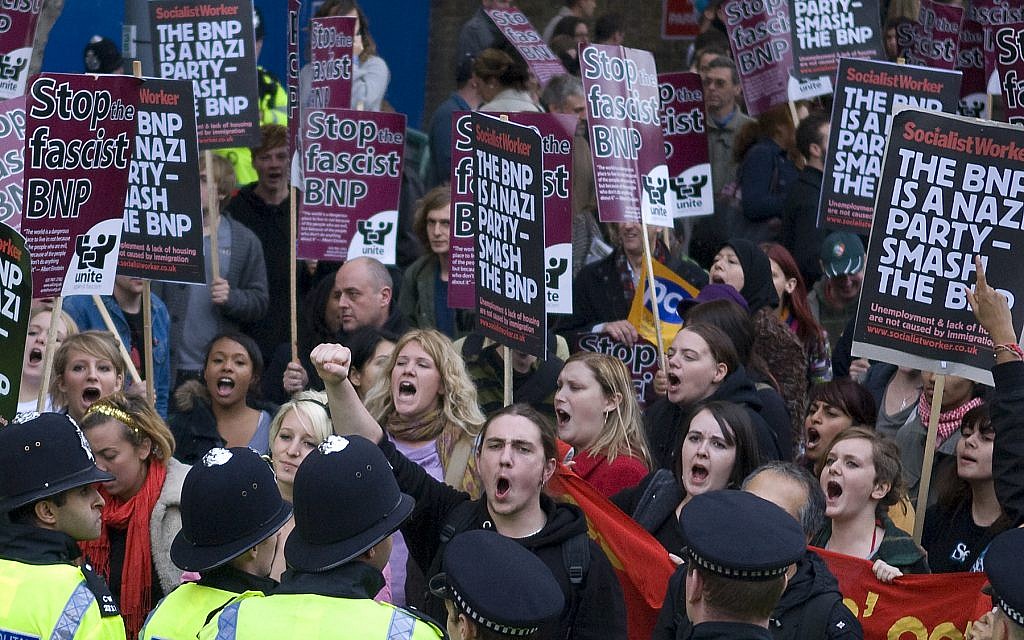 As befits her attempt to primarily explain anti-Semitism to a non-Jewish audience, Neuberger is also determined to explain why its evils are a threat to all. The “paranoid, loony” conspiracy theories, and the tropes that go with them, she writes, “are beginning to be seen and heard among those who hitherto did not have an anti-Semitic bone in their bodies.”

This, she argues, matters to society as a whole: “It matters because it smells, it rots the body politic, it leads to worse, and it renders rational thought incapable in the face of an ineluctable, active theory of why ‘they’ are to blame. It destroys normal, rational, evidence-based thought.

“It matters — to Jews and non-Jews alike,” she says.