With no warning, Israeli farmers on Egypt border find themselves set to be surrounded by Palestinian enclaves. Asks one: Does this look like a map put together by serious people?

They were invited to Washington by Prime Minister Benjamin Netanyahu and were briefed by the premier and US officials on the contents of the proposal, which envisions Israel annexing every one of their West Bank communities.

In contrast, Ramat Hanegev Regional Council chairman Eran Doron had the TV on in the background in his office as he finished up work and was only half-listening to the ceremony, not remotely expecting the plan to directly influence the communities he represents along the Egyptian border.

But immediately after Trump and Netanyahu finished their remarks from the White House East Room, Washington released a “conceptual map” depicting its two-state solution to the conflict, whereupon Doron was shocked to discover that significant parts of his regional council were included in a pair of enclaves earmarked for a future Palestinian state. 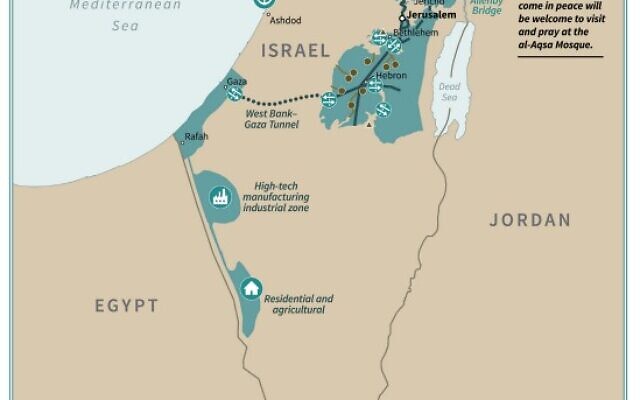 Detail from the Vision for Peace Conceptual Map published by the Trump Administration on January 28, 2020

While the borders for those enclaves appeared to have been drawn to avoid the Israeli farming communities themselves, residents told The Times of Israel during a visit this week to the area that this was just about the only thing the Trump administration seemed to have taken into account when outlining the new Palestinian reserves at their expense.

As for the Palestinians for whom the land has been designated, their leadership hasn’t been in touch with the White House since the latter moved its embassy to Jerusalem in 2017. Regardless, they appeared no more impressed by the proposal than the Ramat Hanegev Regional Council chairman was. PLO Executive Committee member Wasel Abu Yousef told The Times of Israel that Ramallah isn’t interested in anything beyond the West Bank, Gaza Strip and East Jerusalem. “When talking about land swaps, you can’t say that the land in the Negev is of equal value to land in Jerusalem or crucial parts of the West Bank,” he elaborated. 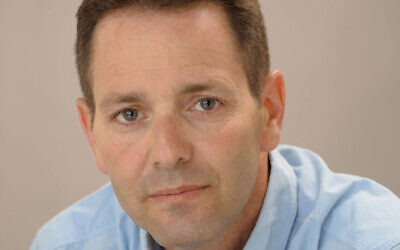 Whether or not either side is keen on giving or receiving the land in question, what locals said frustrated them was a feeling that they were being left out of the loop on an issue that will significantly affect their livelihood.

“Nobody spoke to us about this. Not from the Prime Minister’s Office, nor from the White House. To this day, I still haven’t haven’t heard from anyone,” Doron said on Tuesday, a week after the plan was unveiled.

The lack of communication might have to do with the fact that the Trump officials themselves have not finalized details regarding the Egyptian border enclaves.

Beyond the conceptual map’s labeling of the northern reserve a “high-tech manufacturing industrial zone” and the southern one as “residential agricultural,” the two enclaves receive just one other mention in the 181-page plan. 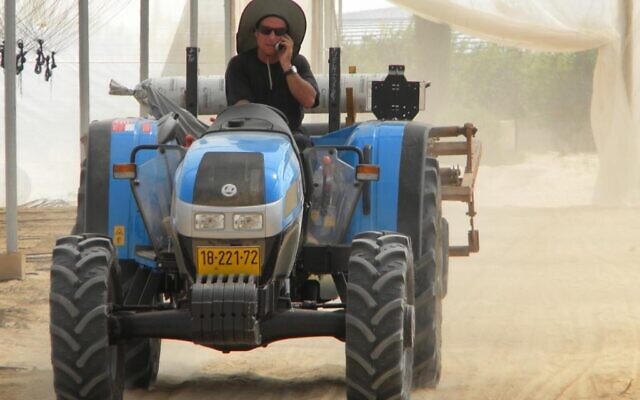 A farmer in the Ramat Hanegev Regional Council. (Courtesyl)

“The Vision… provides for the possibility of allocating for the Palestinians Israeli territory close to Gaza within which infrastructure may be rapidly built to address Gaza’s pressing humanitarian needs, and which will eventually enable the building of thriving Palestinian cities and towns that will help the people of Gaza flourish,” the proposal reads.

The two enclaves are connected on the map by a thin line ostensibly meant to represent a highway linking them to the Gaza Strip. This highway stretches nearly half the length of the Israel-Egypt border, but doesn’t touch the border itself, allowing Israel to maintain control of all crossings into Gaza and Egypt.

Left in the dark by the PMO and Trump administration, the Ramat Hanegev Regional Council has put together its own map, using the exact same scaling as the American version, in order to determine where exactly their five border communities would fit between the new enclaves. 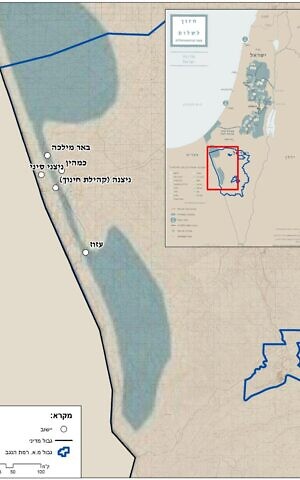 The municipality discovered that Nitzana and Nitzanei Sinai would be cut off from the rest of Israel by the highway connecting the two enclaves, that the road would run right through Moshav Be’er Milka and that the tourism community of Ezuz would be located inside the southern Palestinian enclave.

“Does this look like a map that was put together by serious people?” Ramat Hanegev’s research and development head Yankale Moskovich scoffed. “It looks like it was done by people who do not understand the area.”

A US official speaking on the condition of anonymity clarified in a statement that “the map is a conceptual map. Actual boundaries or borders will take detailed examination.”

But beyond the drawing of the borders, residents argued that the purposes designated for each of the enclaves show a lack of understanding of the topography of the region. Moskovich explained that while the northern enclave consists of land that is either already being used for agricultural purposes or slated for such use by the municipality, the southern reserve is far more hilly and not at all conducive to farming. Nonetheless, it was the latter chunk that was labeled as “residential and agricultural” on the US map. 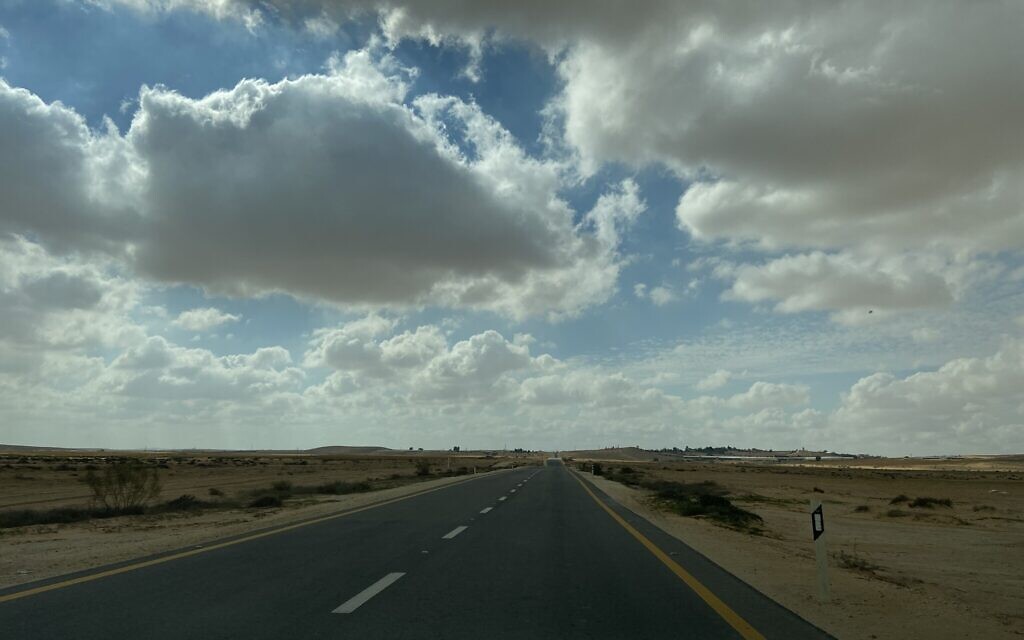 Still, the Trump proposal’s chief architect Jared Kushner expressed confidence in the goals for the enclaves, telling the Egyptian El Hekaya news show on Saturday, “We have one of the biggest developers in the Middle East who will hopefully announce soon that he’s going to come on board to help us do a master plan for the new additions in Gaza.”

Not at our expense

But Kushner’s plans did not appear to interest community leaders in the Ramat Hanegev Regional Council, who called on the government to develop the area rather than giving away its farming land and hemming it in on both sides with Palestinian enclaves.

“This is the high-tech agricultural capital of Israel,” said spokeswoman Shira Avrahami. She pointed out that despite there being just 200 families living in the Ramat Hanegev border towns, the municipality supplies the country with 80 percent of its cherry tomatoes, and ranchers from around the world look to the regional council for guidance in desert farming. 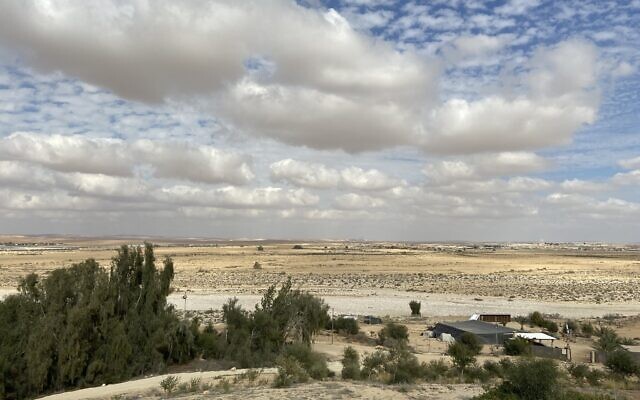 Land designated by the Trump plan to become a Palestinian enclave, just inside the Israel-Egypt border, on February 3, 2020. (Jacob Magid/Times of Israel)

Avrahami said that Ramat Hanegev communities also ensure Israel’s security along the Egyptian border, where the army on the other side has been forced to combat attacks from Islamic State fighters. While the Trump plan envisions Israel remaining in control of the crossings, she argued that the IDF would have a much harder time doing so when only allotted the thin strip of land between the Palestinian enclaves and the border.

“Forget about 1967 borders. This takes us back to 1947,” said Nitzana youth educational village director David Palmach, referring to the UN Partition Plan that proposed including the western Negev inside the Palestinian state. 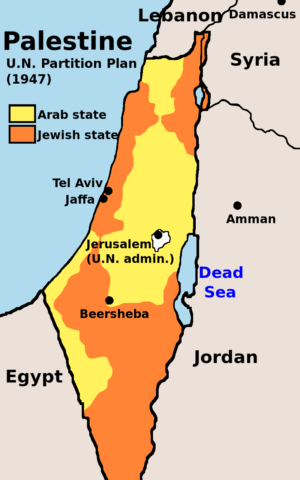 “A solution for all those delusional outposts in Judea and Samaria [West Bank] shouldn’t come at the expense of the Negev,” he said, lamenting that the American plan represented the opposite approach to that of Israel’s founder David Ben Gurion, who dreamed of settling the Negev.

“This place represents the next challenge for the Zionist movement,” Palmach asserted, calling on the government to develop the area.

Walking through the Nitzana campus, one could hear at least five languages being spoken by the hundreds of teenage inhabitants. The site houses a pre-military academy, a field school that teaches high school students about renewable energy and recycling, a program for at-risk youth who left their ultra-Orthodox communities, boarding schools for Bedouin Israelis and Eritreans, and Hebrew courses for immigrants from the former Soviet Union.

“Finally we have an area that’s not involved in the bloodshed of the conflict and now they want to transfer another nation here?” Palmach asked rhetorically. He argued that it would be much harder to develop Nitzana if it were to become surrounded by the Palestinian enclaves. 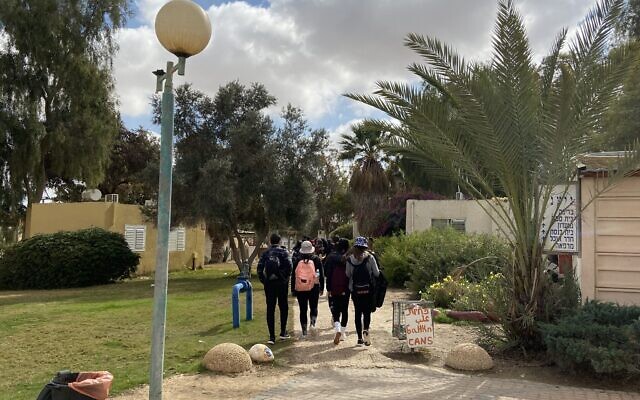 Students walk through the campus in Ntizana on February 3, 2020. (Jacob Magid/Times of Israel)

We came here because it was safe

News of the plan proved particularly upsetting for residents of Be’er Milka, whose agricultural lands appear to be located inside the northern Palestinian enclave.

“There’s so much uncertainty. Will we still be able to grow our crops? Will I have to change jobs?” asked Maya Cherry as she sat in her backyard on the moshav facing a peaceful view of the desert. 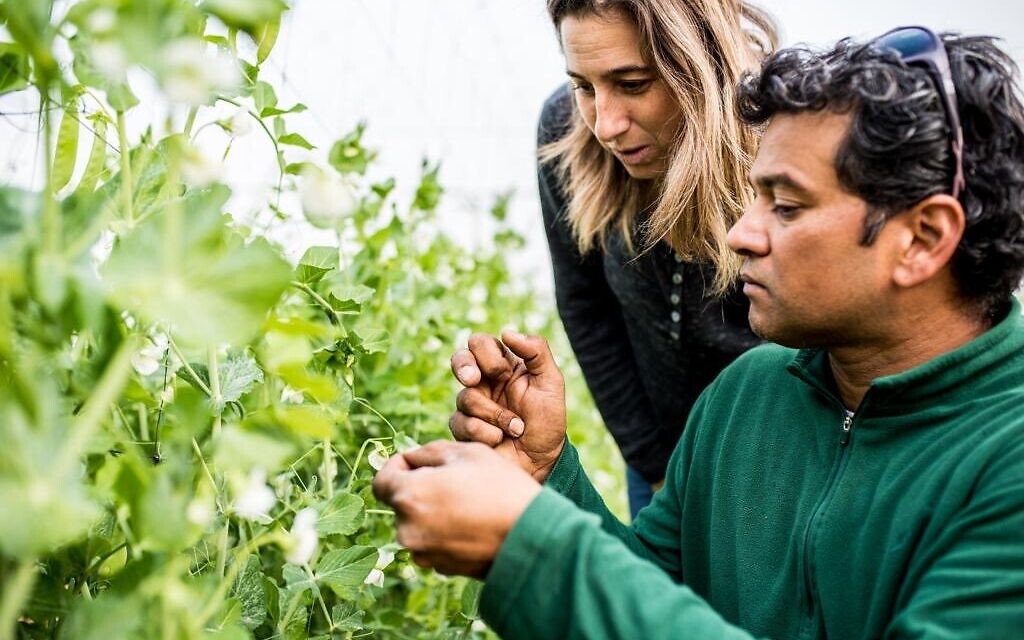 The mother of four moved to Be’er Milka eight years ago with her husband to fulfill a longtime dream of farming Asian vegetables in the desert.

“We came here to farm, to live in peace and quiet. We purposefully avoided the Green Line or anything to do with the conflict. Now all of the sudden I’m getting questions from reporters regarding whether I’m preparing to evacuate,” Cherry said.

She recognized that the plan would not likely come into fruition, but argued that she didn’t have the luxury of preparing for that result. “At the end of the day, this is my home and livelihood we’re talking about.”

“We can’t farm here if this becomes a security zone,” Cherry added. 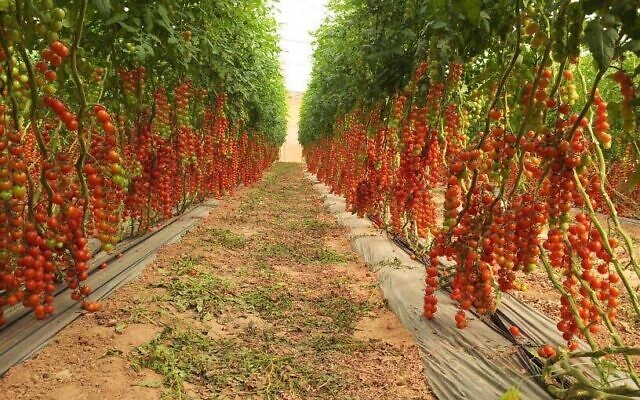 Further north along the Egyptian border, residents expressed similar apprehension regarding the Trump deal, but appeared more willing to work with the proposal.

Like Ramat Hanegev, the Eshkol Regional Council would also see some of its agricultural lands transferred to the upper Palestinian enclave. Towns such Shlomit, Bnei Netzarim and Naveh, where red alert sirens have been regularly triggered in recent years due to rocket fire from Gaza just to their north, would have an additional Palestinian enclave just to their south, based on the Trump plan.

Nonetheless, Eshkol Regional Council spokeswoman Yifat Lipner said the municipality was willing to wait and see the exact details of the plan before taking a position.

“We’re not going to react based on a map that was shown on TV,” she said, adding that the council chairman Gadi Yarkoni had requested a meeting with National Security Adviser Meir Ben Shabbat. 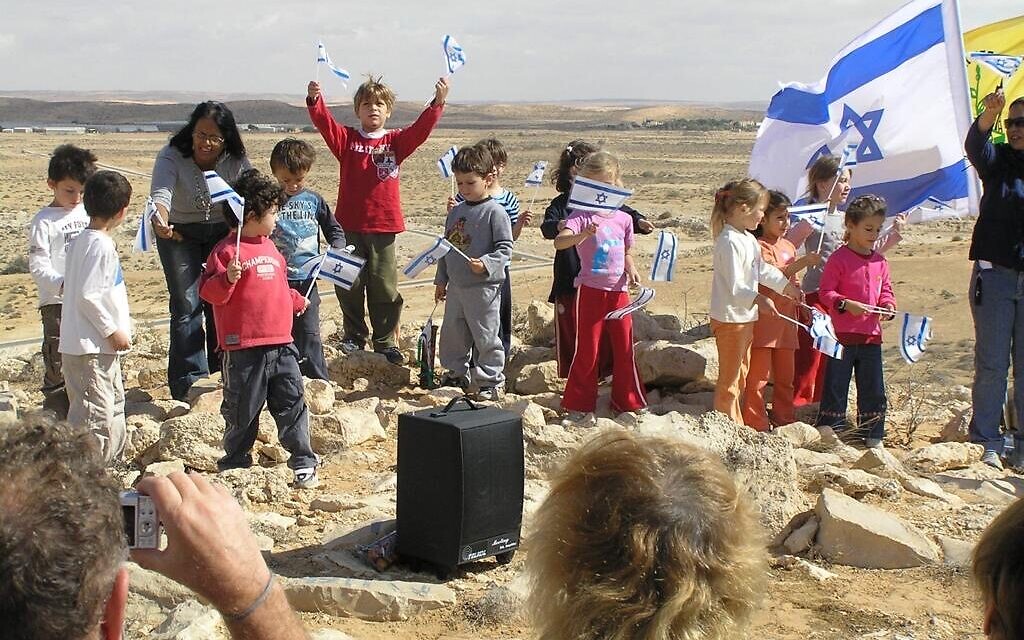 Yarkoni also penned a letter to Netanyahu in which the Eshkol mayor said that he was prepared to give up agricultural land in order to achieve a bilateral peace agreement with the Palestinians “that would allow for regional cooperation.”

Asked to explain the more dovish position compared to her Ramat Hanegev neighbors to the south, the Eshkol spokeswoman said, “We suffer from the situation in Gaza more than anyone else, so if there’s a real opportunity to reach an agreement then we’re willing to pay a price.”

Nonetheless, Lipner clarified that an explanation would be needed from the Israeli government on the matter.

Asked for comment, the Prime Minister’s Office declined to provide one. 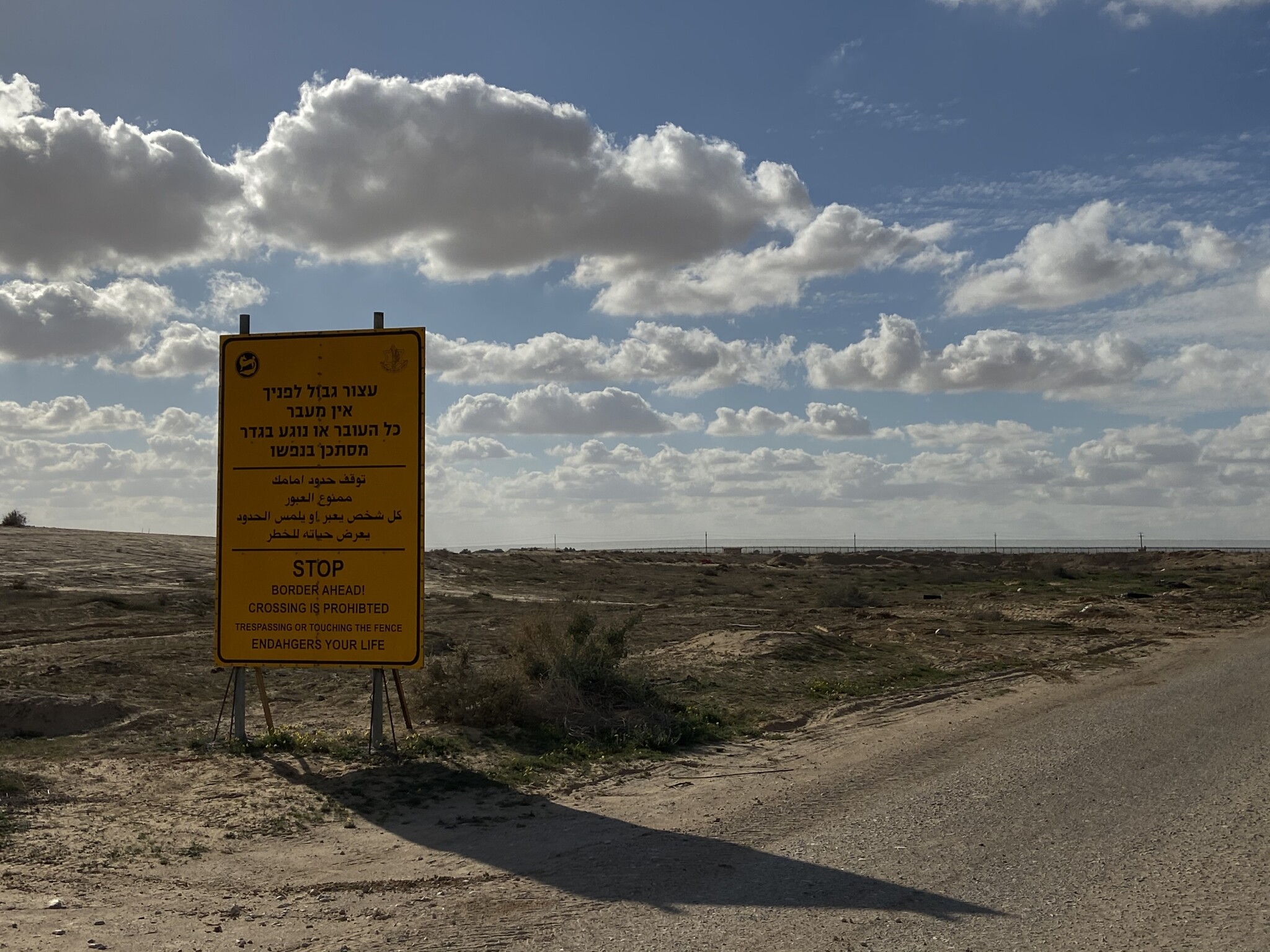