For Jeremy Issacharoff — who 26 years ago became the first Israeli diplomat to meet an Emirati official — watching the prime minister of his country sign a peace treaty with the UAE felt like coming full circle.

After the event, still standing at the White House lawn, Issacharoff took a selfie with Emirati Ambassador to the US Yousef al-Otaiba, and posted it on his Twitter account. “On this day after many years of friendship and discreet contacts, we can now be photographed together without masks,” he added.

Al-Otaiba has been instrumental in making the new UAE-Israel alliance possible; his unprecedented June Hebrew-language op-ed in Yedioth Aharonoth is widely thought to have kicked off the process that culminated in Tuesday’s peace treaty.

“I have known Yousef al-Otaiba for many years. During this time we developed a personal friendship based on trust, discretion and mutual credibility,” said Issacharoff, who today serves as Israel’s ambassador to Germany.

“It is very rare in diplomacy to have the opportunity to see a relationship expand from its initial contacts and be able to witness its formalization into full diplomatic relations as we did on the White House lawn,” the senior diplomat told The Times of Israel in an interview.

“It was also very symbolic to have met Yousef at the ceremony and be able to finally ‘take the mask off’ the relationship, if only for a brief instant. This is the completion of a personal circle that now opens a much greater one between our two countries.”

On this day after many years of friendship and discreet contacts, we can now be photographed together without masks – my good friend and colleague Ambassador Yousef al Otaiba ⁦@UAEEmbassyUS⁩ – one of the foremost diplomats I have ever met. pic.twitter.com/dQiuDbwxY0

In 1994, Issacharoff, then the number three at the Israeli embassy in Washington, was approached by an American consultant called Sandra Charles, who worked with Gulf countries and said the UAE wanted to know how Israel felt about Abu Dhabi seeking to buy F-16 fighter jets from the US.

“The Emirates wanted to avoid clashes with us on Capitol Hill regarding agreements on defense sales,” Issacharoff recalled. “I said, let’s meet and discuss.”

According to a 2018 article in the New Yorker, Issacharoff told his US interlocutor that the Israelis “wanted the opportunity to discuss the matter directly with the Emiratis, to find out how they intended to use the American aircraft.”

‘We met for the first time and the conversations just flowed’

A few days later, Issacharoff headed to Charles’s and met with an Emirati academic called Jamal S. Al-Suwaidi, who at the time established the Emirates Center for Strategic Studies and Research, a government-backed think tank he headed until earlier this year.

“The center was established ‘for scientific research and studies on social, economic and political issues,’ but it became a conduit for contacts with Israel,” according to the New Yorker.

Al-Suwaidi was also a high-ranking adviser to Mohammed bin Zayed — the son of the UAE’s founding father and currently the country’s de facto leader.

“We met for the first time and the conversations just flowed,” Issacharoff recalled. “We talked about many different things. It became clear very quickly that the conversation was revealing a lot of similar ideas and interests that we shared.”

As an Israeli diplomat in the 1990s, Issacharoff, a native Londoner, had visited many places in the Arab world, including Tunis and Doha. He had participated in talks with officials from Egypt, Jordan and Syria.

“To the best of my knowledge, this was the first time an Israeli diplomat had a conversation with an official from the UAE,” Issacharoff said of his 1994 meeting with Al-Suwaidi.

“The conversations delved into wider issues, into broadening the conversation between us. It ignited the hope that this would definitely develop, in due course, into something deeper. I wasn’t under the illusion that this was going to be a very quick process. But I really felt it could lead to something very substantive.” 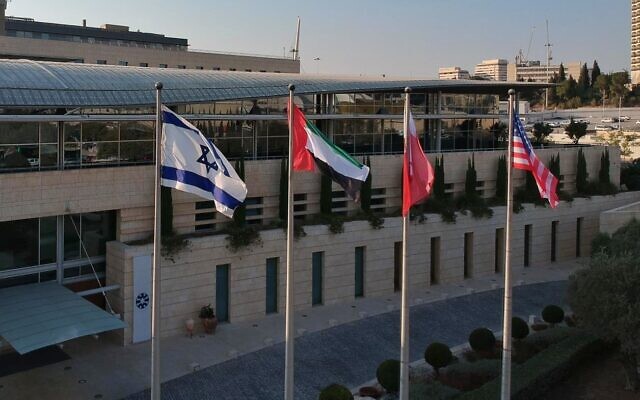 The flags of Israel, the UAE, Bahrain and the US flying outside the Foreign Ministry in Jerusalem on September 15, 2020, in a Tweet posted by Foreign Minister Gabi Ashkenazi, as Israel, the UAE and Bahrain sign the Abraham Accords at the White House in Washington, DC. (Twitter)

They met a few more times and started to develop a relationship of mutual trust.

“One of the most important things in such discussions is to be very discreet, and to be able to maintain your credibility,” Issacharoff, a former deputy director-general of Israel’s Foreign Ministry, heading its division for strategic affairs, said.

The Emiratis eventually got the F-16s.

“I remember a meeting of prime minister Yitzhak Rabin at the Pentagon and, as has already been reported, Rabin said, ‘We won’t object,’” Issacharoff told German magazine Der Spiegel earlier this year. “It was a diplomatic move that created the trust to open a more sustained dialogue through other means.”

Signing the historic Abraham Accords in Washington DC between Israel, the United Arab Emirates, Bahrain and the United States at the White House. It is inspiring to witness the culmination of a process, years in the making, that can transform our region. pic.twitter.com/qxjNFEBYLK

Over the years, Issacharoff has met numerous officials from the UAE.

“Mostly, I felt that there was a kind of thirst on both sides to better understand each other’s position on a wide range of subjects. We talked about issues that posed a common challenge to both countries,” he said.

“Over time we spoke about many different things, whether it’s Iran — the nuclear aspect, the missile threat and its meddling in the region — or the situation in Syria, Egypt or Jordan. We found that, by and large, we viewed things in a very similar way,” he went on.

On the Palestinian issues, Issacharoff and his Emirati interlocutors had to agree to disagree.

“In all of the conversations that we had, the UAE first and foremost raised the Palestinian issue,” he said. “It was very clear what our respective positions were on this issue. It didn’t prevent us from having this broader regional discussion.” 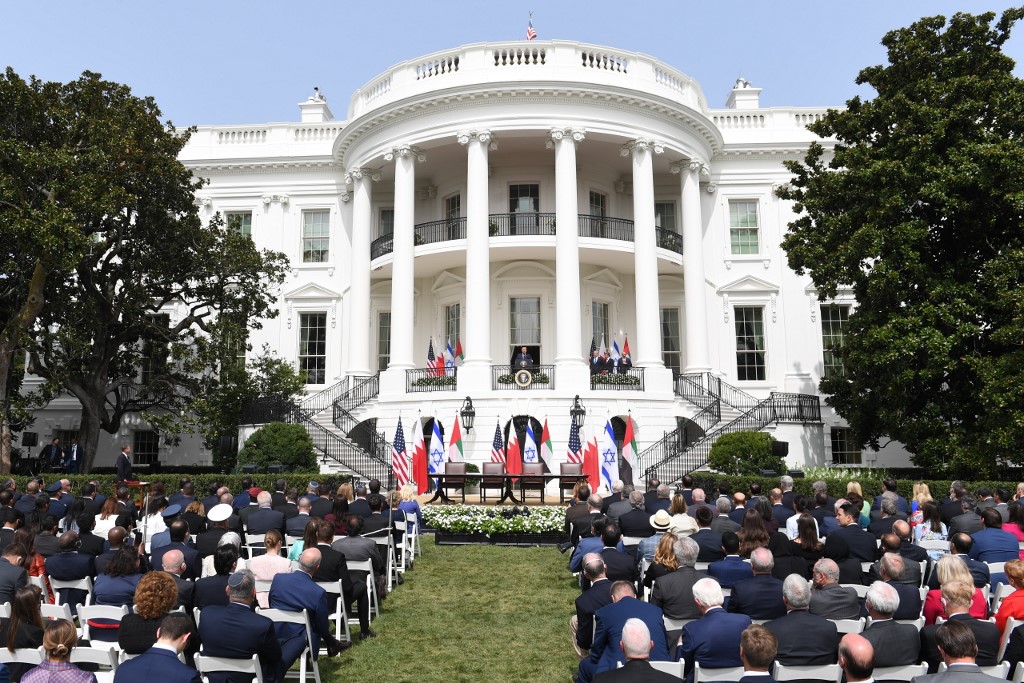 An audience watches as US President Donald Trump speaks from the Truman Balcony at the White House during the signing ceremony of the Abraham Accords where the countries of Bahrain and the United Arab Emirates normalize ties with Israel, on the South Lawn of the White House in Washington, DC, September 15, 2020 (SAUL LOEB / AFP)

Now that Israel and the UAE have established formal diplomatic relations, and Bahrain has announced that it wants to follow suit, what’s Issacharoff’s advice to Israeli officials trying to convince other Arab countries to join the circle of peace?

“One of the key things is: always maintain your credibility in the conversations you’re having,” he replied. “Look for the things you have in common rather than dwell on the things that you disagree on.”

The last few years have shown that personal connections between Israelis and Arab officials are much broader than our official relations, the senior diplomat said.

“If these contacts are handled discreetly, they can actually become much deeper much faster than official contacts. One of the things I’ve seen is that the personal contact between people can bring a real and substantive change in the relationship developing between states.”