Jamaica Kincaid loves “Shtisel.” The Antiguan-American author might be an unlikely fan of the Israeli series about a Hasidic family dealing with the ups and downs of an ultra-Orthodox lifestyle, but the show, now on Netlifx with English subtitles, seems to speak to her sense of transgression.

“I couldn’t stop watching it. It’s beautiful. It raises these really wonderful questions,” she says.

Speaking with me on the sidelines of the National Library of Israel’s Global Forum, which this year ran from March 17-19 and focused on migration, borders, and identity, the Harvard prof giggles with just a twinge of melancholic irreverence even as she fires off an invective against the establishment powers she despises.

Kincaid wasn’t giggling the previous night when she participated in a panel on migration. Saying she was tired of the Euro-centric conversation she’d been hearing at the forum so far, Kincaid railed against the hypocrisy of a continent concerned about immigrants influencing their societies after Europeans colonized so many places around the world over the centuries. Seated next to her onstage, fellow writer and Polish Holocaust survivor Eva Hoffman involuntarily frowned.

But then, Kincaid was never really known to pull her punches. During her 20 years writing for the New Yorker, in her novels, as well as her nonfiction, Kincaid has built a reputation on boldness.

It’s the author’s sixth trip to Israel. Raised a Wesleyan Methodist in her native Antigua, Kincaid converted to Judaism in 1993 so that her children would have two Jewish parents. And though Kincaid is neck-deep in academic life, she says she doesn’t receive pushback over her visits to the Jewish state.

“I don’t think I have friends who behave like that,” she says. “I don’t think people I know would tell each other what to do. I don’t think where I am, at Harvard – it just never comes up. We talk about all sorts of things about the world, but no.”

In an environment where anti-Israel sentiment is rampant, that’s somewhat extraordinary. As for those who the author doesn’t count among her friends, “They would probably keep their opinions to themselves,” she says.

The following interview has been edited for length. 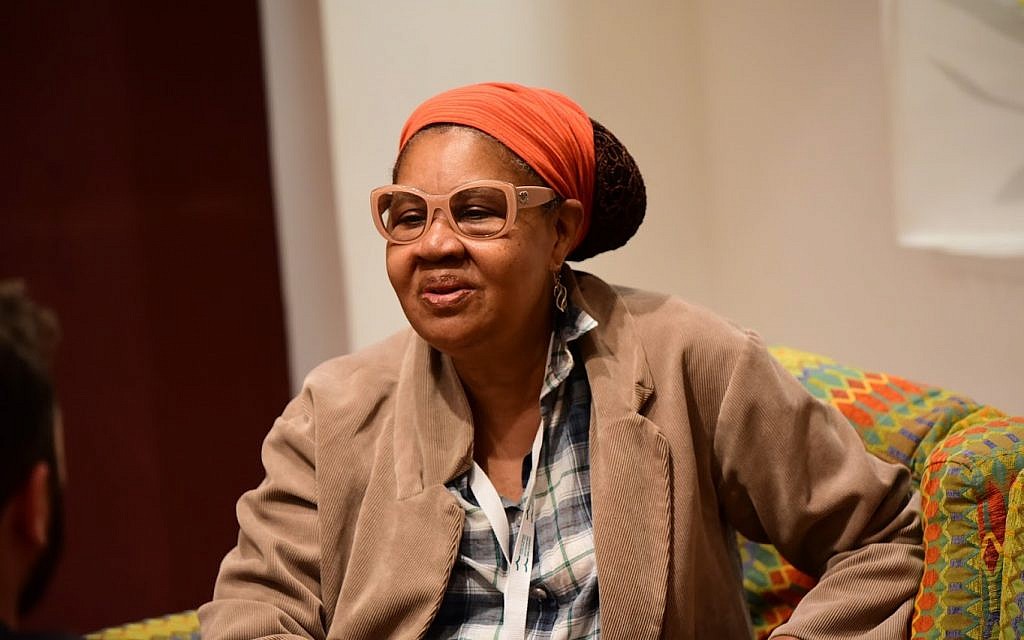 Jamaica Kincaid in conversation with The Times of Israel, March 19, 2019. (Yonatan Kelberman)

This forum has an emphasis on identity, something that plays a big role for writers.

I know. I’ve become so weary of identity, I’ve decided not to have any — public ones, at least. I mean, obviously I’m black, obviously I’m a woman, a lot of things are obvious about me, and I don’t regard – well, the black thing is obviously a social construct. But the woman thing, at a certain time in my life, every 28 days I bled. That was something. And it does shape your thoughts. To talk about identity, I can talk about the history that I have, where I come from, and I draw things from it that I think about myself, but I’ve really grown so weary of the thing called identity, because it seems to be no help, the public one seems to be no help, really. It seems to just shut you in.

You know, supposedly, according to one of those tests, I’m three percent Ashkenazi. I don’t understand these tests actually… but my children are forty-something percent Ashkenazi, and only thirty-something sub-Saharan — their father’s ancestors never married anybody. But aren’t Jews not exclusively an ethnic group? There must be people like me.

I actually wanted to ask you what you thought about the discussion going on in the US today, about whether Jews are considered white or not.

If I were white and a Jew, I would drop the “white” because it has a disgusting – I mean, it’s like calling yourself a Nazi or something. It’s a disgusting history. But I wouldn’t argue for anything like that [that Jews are considered white] – that’s a stupid argument. The next thing you know, you’re dragging up Hitler’s little book. “Are Jews white?” 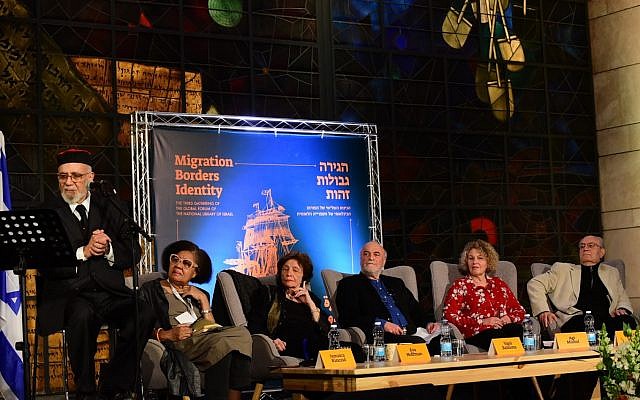 Well, it’s a politicized thing. I wonder if people run to the margins in order to escape feelings of guilt or responsibility.

Yes, well. You won’t escape responsibility or guilt by running away, but if I were a white Jew, I’d drop the “white.”

You were speaking last night about your religion growing up…

Yes, as a Methodist. A Wesleyan Methodist. And in that, you see a whole series of things. We were Methodists because the Methodists, having few sources of converts or members in England, went out to the colonies. And the Anglicans, which is the Church of England and would have been the religion of the slave masters, didn’t want slaves to read. And so the way the Methodists – and the Moravians – got converts, was to teach slaves to read.

And so, when I was growing up, you could tell in a way people’s ancestry – who were Anglicans, the black Anglicans, and they tended to be a higher class. Because they might have been the favored black people. They were the elite, the Anglicans.

So education was wielded as a weapon.

It’s certainly always been in the New World. The desire to feel Africans were inferior was so great, that everything you could do to reinforce that, you did. They’d say, “They’re ignorant.” Well, they’re ignorant because you keep them ignorant. They were capable of learning to read, like anybody else. All human beings are capable of the same things, I suspect. So it was one of those ways that were used to tell yourself that what you thought was really true. So if you thought Africans were inferior, you’d make them inferior by keeping them away from books.

In the South it was very enforced, how illegal it was, but in the Caribbean not so much. So these various sects looking for converts would find these captive people, and one of the ways they sympathized with them was to teach them to read. 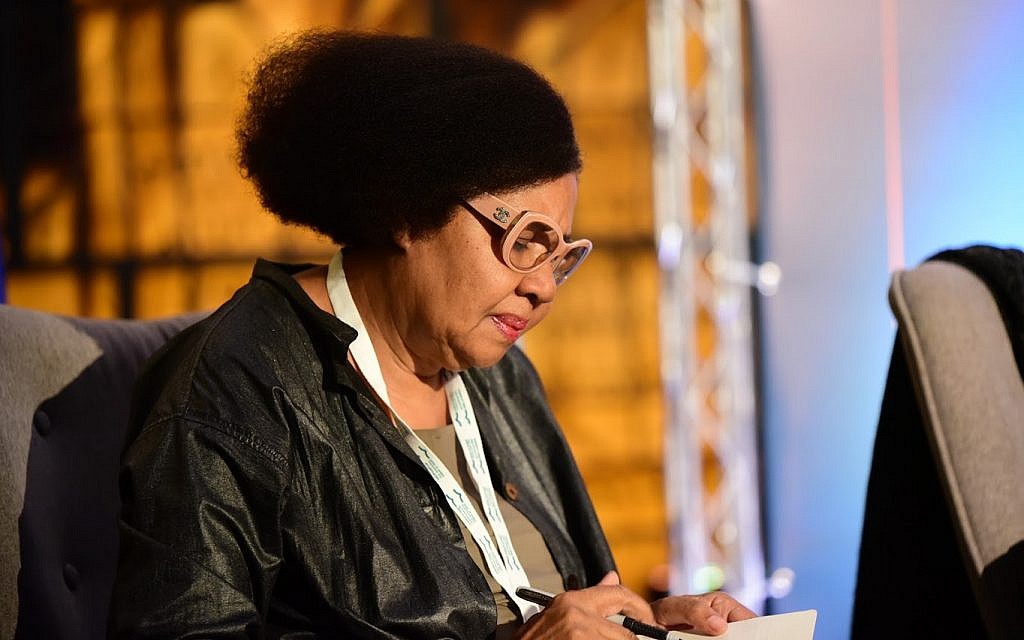 Jamaica Kincaid looks at her notes during a panel on migration at the National Library of Israel’s Global Forum, March 18, 2019. (Yonatan Kelberman)

You spoke yesterday about how you’d sing hymns about the white hills of Dover, longing for a place where you’d never been.

They’re not. But they really have these cliffs, and I of course hated them when I saw them, because they reminded me of this hymn, that – it was a hymn of longing to return to your homeland. [Singing] “We’ll see the white cliffs of Dover.” And so we were longing for something we had never seen.

I remember the first time I saw the Western Wall, and I thought to myself, ‘So, that’s it?’

Well, I was just thinking that in religion we spend so much time pining for things we’ve never seen. Some of them might be imaginary…

Yes, well, but they keep us. I mean, Eden, for instance. We keep making it in some way, and of course, we can’t live in it as we make it. So that’s really one of the great metaphors in any religion, I think, the Edenic paradise. I think it’s one of the great ones, but then, I’ve lived my life with it so much that I suppose I say that out of a kind of prejudice. I mean, I’m coming from the Caribbean, which is often described as a paradise, but for those of us who live there, it’s just, “Get me out of here!”

But I suppose if you live in any place long enough, you long to leave it, which is I guess another problem with immigration. People didn’t get here because we just sprung up out of the ground. It’s a very funny thing, it’s really interesting to hear people – maybe I’m missing something in these panels, I think I am – but so far we’ve talked about immigration from a crisis point of view, but not from the philosophical or psychological point of view. 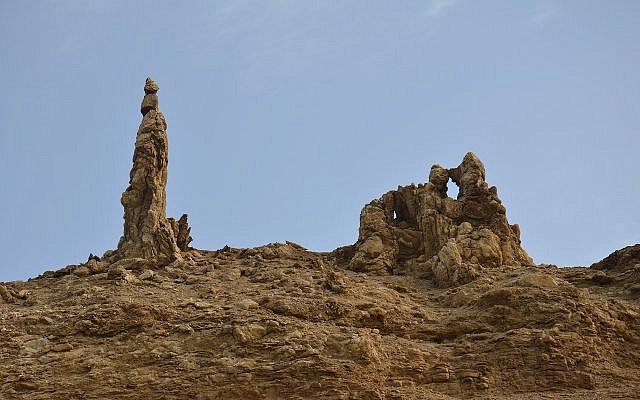 The pillar of salt believed to be Lot’s wife, by the Dead Sea. (Public domain)

I was once by the Dead Sea, and it has a little plaque that says, “This way to Lot’s wife.” Have you ever seen it? You’ve got to go see it. And it’s a little pathway, and you look up, and there’s a huge slab of stone that’s in the shape of, well, I suppose a person, sort of two arms, and that’s Mrs. Lot, apparently, looking back. [Giggles.]

And I thought, “Of course you would look back.” Because, first of all, they came all the way from Iraq, and they find this place on the other side in what’s now Jordan, and it has nightlife, it has gay people, it has fun, sex, it’s great. And then they’re told to leave and not look back. Of course when you see that vast expanse of sand in front of you, you would look back and say, “Oh, I miss it.” But. Turned to stone. Or a pillar of salt.

I mean, the Bible is just full of people going here, gathering that, doing this, digging wells, making little communities, finding God, abandoning God. My favorite is to read Jeremiah where God is just in despair over the fun these children are having.

They don’t like a lot of fun in that book, do they?

It’s a very severe book – and this might be a factor, I’m sure it is, but when I was a child I had so few things to read that I read the Bible over and over, the entire thing, Old and New Testament, and came to have all sorts of opinions about it as a child, you know? I just would argue, I didn’t know it was a tradition – maybe the Ashkenazi was rearing its little 3% in me as a child, but I would just argue with things.