The earliest stone inscription bearing the full spelling of the modern Hebrew word for Jerusalem was unveiled on Tuesday at the Israel Museum, in the capital.

While any inscription dating from the Second Temple period is of note, the 2,000-year-old three-line inscription on a waist-high column — reading “Hananiah son of Dodalos of Jerusalem” — is exceptional, as it is the first known stone carving of the word “Yerushalayim,” which is how the Israeli capital’s name is pronounced in Hebrew today.

The stone column was discovered earlier this year at a salvage excavation of a massive Hasmonean Period Jewish artisans’ village near the Jerusalem International Convention Center, at what is now the entrance to the modern city, by an Israel Antiquities Authority team headed by archaeologist Danit Levi.

“A worker came to me in the office towards the end of the day and excitedly told me to grab my camera and writing materials because he’d found something written,'” Levi told The Times of Israel, ahead of the column’s unveiling Tuesday.

‘My heart started to pound and I was sure everyone could hear it. My hands were trembling so badly I couldn’t properly take a picture’ — archaeologist Danit Levi

At first, the excited worker could not clearly explain what he had found, and Levi thought it was graffiti.

“I was picturing red spray paint in my mind and couldn’t understand how that happened because the latest dating could only be 2,000 years ago or earlier,” said Levi. 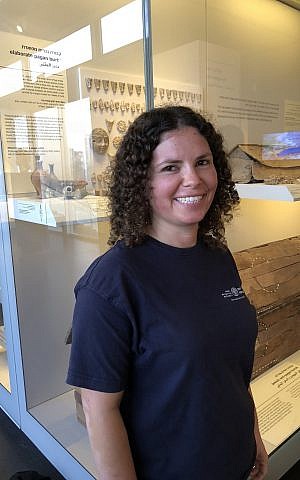 Danit Levi, director of the excavations on behalf of the Israel Antiquities Authority near the Jerusalem International Convention Center, at the Israel Museum on October 9, 2018, for the unveiling of an unusual stone inscription. (Amanda Borschel-Dan/Times of Israel)

But when she saw the professionally chiseled Hebrew lettering inscribed into the stone column, she realized it was something unusual. Brushing off the dirt, she began to read what was written.

“My heart started to pound and I was sure everyone could hear it. My hands were trembling so badly I couldn’t properly take a picture,” said Levi, who dates the column and its inscription to 100 BCE.

The 80 cm. high column has a diameter of 47.5 cm, said Levi, and would have originally been used in a Jewish craftsman’s building. It presumably belonged to or was built with money from Hananiah son of Dodalos.

While inscribed in a Jewish village — Levi said there is evidence of ritual baths as well as other finds bearing Hebrew lettering at the site — the column was eventually reused in a plastered wall, found in a ceramic construction workshop in use by the Tenth Roman Legion, that would eventually destroy Jerusalem in 70 CE.

Hananiah may have been one of the several potters of the village located a mere 2.5 kilometers (about 1.5 miles) outside of ancient Jerusalem, who created vessels used by Jerusalemites and pilgrims for everyday cooking and Temple offerings. Industrial areas such as this one, said Levi, are always found outside of urban areas to avoid the city’s pollution.

Strategically located near clay, water, and fuel for their kilns, the village was also on a main artery leading to the Temple — which is used until today, noted the IAA’s Jerusalem Regional Archaeologist Dr. Yuval Baruch at the unveiling.

Jerusalem during the Second Temple, said Baruch, was one of the largest cities in the east, with a population of at least 50,000 residents, which swelled by as many as hundreds of thousands, during the three annual pilgrimage festivals. The excavated artisans’ site is approximately 200 dunams, “larger than a small village,” which would have been necessary to cater to the needs of the pilgrims ascending Temple Mount. 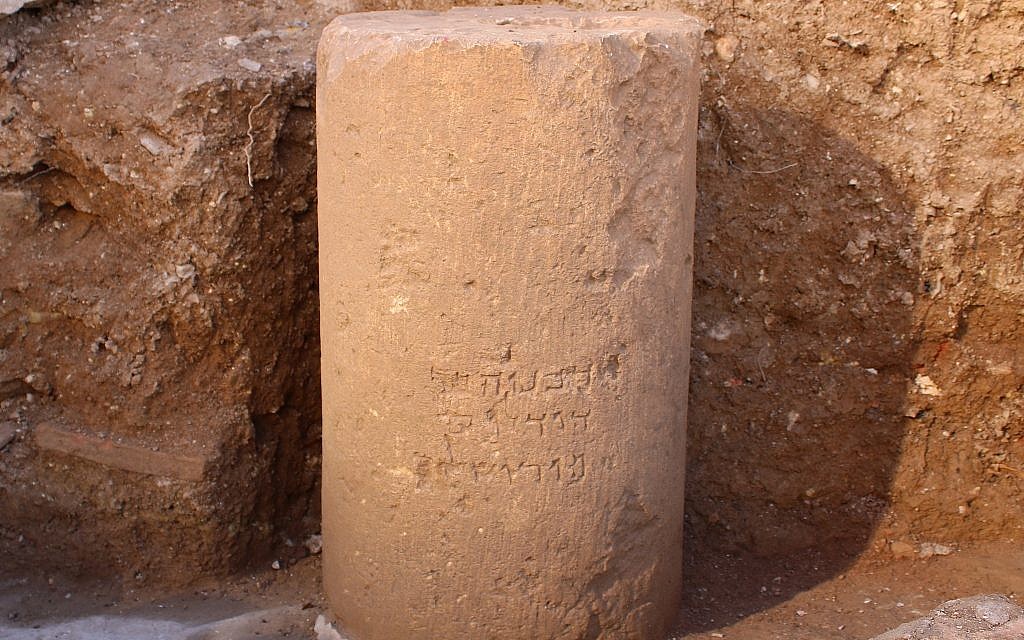 The inscription as it was found in the excavation near the Jerusalem International Convention Center, winter 2018. (Danit Levy, Israel Antiquities Authority)

The stone inscription is now on display at the Israel Museum in a room of the archaeology wing that is dedicated to Second Temple period artifacts discovered in Jerusalem, including a new piece which the inscription, “Ben HaCohen HaGadol,” or son of the High Priest. On a platform upon which the Jerusalem column stands are stone vessels and pottery, perhaps even created by Hananiah himself.

The inscription, labeled as Aramaic at the Israel Museum, gives some insight into Hananiah. Written in Hebrew letters, he is called “Hananiah bar Dodalos,” the Aramaic word “bar” used to denote “son of.” The name of his father, “Dodalos,” said the archaeologists, is a nickname for artists of the time, based on Greek mythology’s Daedalus.

New director of the Israel Museum Prof. Ido Bruno said he was pleased to continue a fruitful collaboration between his institution and the IAA. He noted that the short inscription, found only a seven-minute walk away, is evidence of a long history of ceramic craft and industry.

Bruno added that, as a Jerusalemite himself, he was excited to see the word “Yerushalayim.”

“Every child who knows a few letters of Hebrew can read it,” said Bruno, “and understand that 2000 years ago, Jerusalem was written and spelled like today.”

Is the inscription in Hebrew or Aramaic? 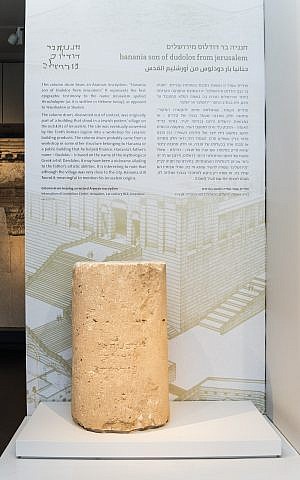 According to the Israel Museum’s new display text accompanying the inscription, it is written in Aramaic. According to scholars at the Academy of the Hebrew Language, however, the crown jewel of the inscription, the word “Yerushalayim,” clearly indicates the use of Hebrew, not Aramaic.

In Aramaic, the word would have been spelled “Yerushalem,” said Dr. Alexey (Eliyahu) Yuditsky, who works as a researcher for the academy’s Historical Dictionary Project.

“The spelling with the letter ‘yud’ points to the Hebrew pronunciation,” said Yuditsky from his Givat Ram office.

The more difficult question, said Yuditsky, is what is Aramaic and what is Hebrew during this era? They are sister languages and many Jerusalemites would have spoken both fluently, and even used them interchangeably.

Opening a book by epigraphist Ada Yardeni on Bar Kochba’s Cave of Letters, a trove of administrative documents dating to circa 131-136 CE, Yuditsky randomly pointed out a Hebrew contract in which Jews signed names both using the Hebrew “ben” for “son of” and the Aramaic “bar,” illustrating its undifferentiated nature during this era.

The use of “bar” in the new Jerusalem inscription, Yuditsky said, does not at all necessarily mean it was written in Aramaic. 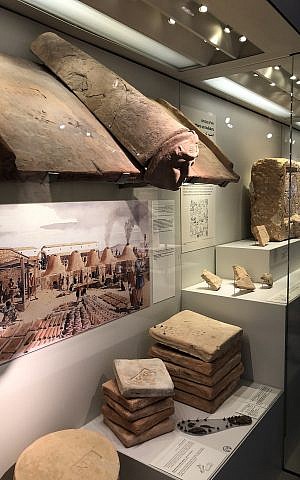 Artifacts taken from a Roman Legion ceramic building materials workshop from an excavation near the Jerusalem International Convention Center, now displayed at the Israel Museum, October 2018. (Amanda Borschel-Dan/Times of Israel)

The spelling of the name Hananiah son of Dodalos could have been “international,” said Yuditsky, and he would have spelled it this way, whether in Hebrew, Aramaic, Greek, or Latin.

While, according to archaeologists, this inscription is the first of its kind uncovered in stone, the fact of finding a full spelling of Jerusalem is not such a rare occurrence for the time period, Yuditsky said.

The Dead Sea Scrolls, which may have been written as early as 400 BCE, but are definitely at least contemporary or earlier than the stone inscription, offer dozens of physical examples of the full spelling of “Yerushalayim.” Written in the same Hebrew font, a random example Yuditsky found in the IAA’s digital scan of the War Scroll jumped off the page in clear, modern-appearing script.

“You can find it [the spelling] in the Dead Sea Scrolls without end,” said Yuditsky. 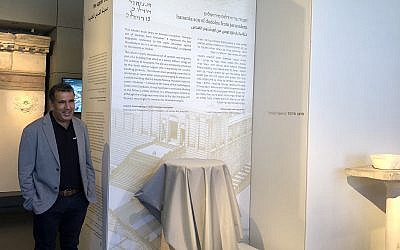 Dr. Yuval Baruch, Jerusalem Regional Archaeologist of the Israel Antiquities Authority, at the unveiling of an unusual stone inscription now on display at the Israel Museum, October 9, 2018. (Amanda Borschel-Dan/ Times of Israel)

But for this writer, it is something quite different to look at a computer screen at the digitalized Dead Sea Scrolls and to see a waist-high column inscribed with the name of the State of Israel’s capital.

Jerusalem archaeologist Baruch, well aware of the many travels and trials the Hebrew language passed through, traversing continents and historical time periods, in seeing this new inscription, he said he was moved that “some aspect of the Jews’ language was preserved the same way, from ancient times until today.”