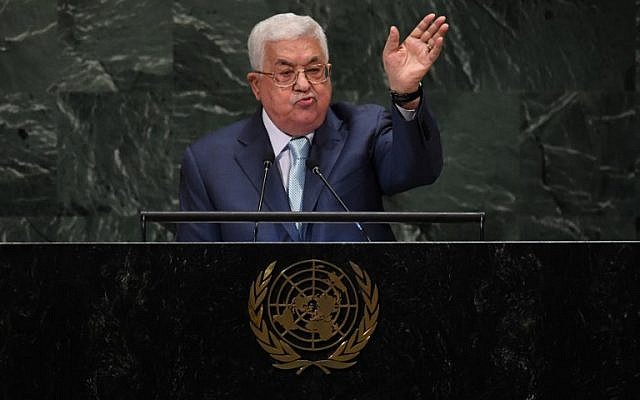 Palestinian Authority President Mahmoud Abbas said he will travel to New York City in the coming days to assume the chairmanship of the largest bloc of developing countries at the United Nations.

In July, the bloc, known as the Group of 77, chose the “State of Palestine” to serve as its next leader.

“We will continue moving forward and making accomplishments, one after another,” Abbas told a group of Egyptian journalists and intellectuals Friday, according to the official PA news site Wafa. “In [the] coming days, I will go to New York to take over the chairmanship of the Group of 77…This is something that will strengthen the State of Palestine’s status in the international arena.”

Abbas did not say when exactly he will fly to New York City, but Palestine is scheduled to take the Group of 77 over from Egypt this month.

The Group of 77 is a consortium of 134 developing countries that often works together in the UN General Assembly. The body was originally founded in 1964 with 77 countries, including Egypt, Saudi Arabia, Brazil, Thailand and India. Over the years it has grown to include countries such as South Africa, Qatar, Cuba, Bosnia and Herzegovina, Singapore, and Angola, and currently represents some 80 percent of the world’s population.

In October 2018, the General Assembly voted by an overwhelming majority to temporarily grant Palestine additional rights and privileges, allowing it to head the Group of 77.

While it serves as the leader of the body, Palestine will be able to cosponsor proposals and amendments, make statements, and raise procedural motions.

In October, both Israel and the US expressed strong opposition to granting the Palestinians extra rights at the UN.

On Saturday, Abbas and Egyptian President Abdel Fattah al-Sissi met in Cairo, where they discussed reconciliation between the Hamas terror group, which rules the Gaza Strip, and Abbas’s West Bank-based Fatah faction, Wafa also reported, but did not provide details on their conversation. 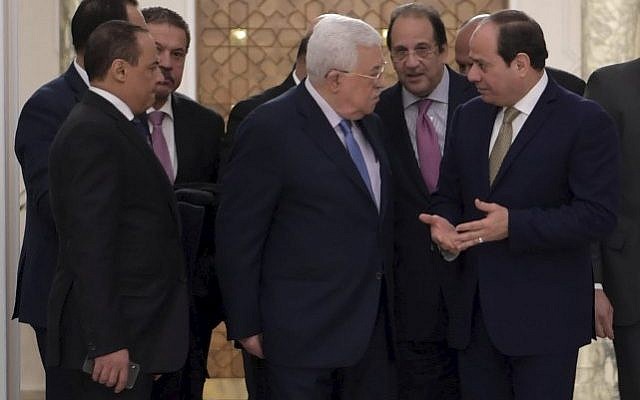 Nabil Shaath, Abbas’s adviser for foreign affairs, told The Times of Israel on Thursday that the PA president intended to ask his Egyptian counterpart “what he thinks needs to done on the matter of reconciliation. because things are not moving in the right direction, especially after what Hamas did three days ago.”

Fatah officials have accused Hamas authorities in the Gaza Strip of having prevented Fatah members from lighting a torch in Gaza City on Monday to commemorate the 54th anniversary of their party’s founding.

Speaking to Palestine TV, the official PA station, on Tuesday, Hussein al-Sheikh, a Fatah Central Committee member, accused Hamas of preventing the torch-lighting, accusing the terror group of committing a “sin” and acting in an “anti-nationalist” manner.

While the Hamas-run Interior Ministry in Gaza has not commented on the Fatah officials’ allegation, Husam Badran, a senior Hamas leader, has suggested that Fatah did not ask the Hamas-run security forces for permission to light the torch.

“All parties are able to organize any event…as long as they follow the known legal procedures in the Gaza Strip,” Badran told Dunya al-Watan, a Gaza-based news site, on Tuesday.

Hamas and Fatah have been at loggerheads since 2007, when the former ousted the Fatah-dominated PA from Gaza.

While the rival parties have signed a number of agreements to advance reconciliation, they have failed to implement them. Most recently, Fatah and Hamas signed an Egyptian-sponsored reconciliation agreement in October 2017, but did not succeed in executing it on the ground.

Since a bomb exploded adjacent to PA Prime Minister Rami Hamdallah’s motorcade in March 2018 in Gaza, Ramallah-based ministers have not visited the coastal enclave. Abbas has accused Hamas of carrying out the bombing; the terror group has vehemently denied the charge.

In the recent past, Egypt has been the primary mediator between Hamas and Fatah.