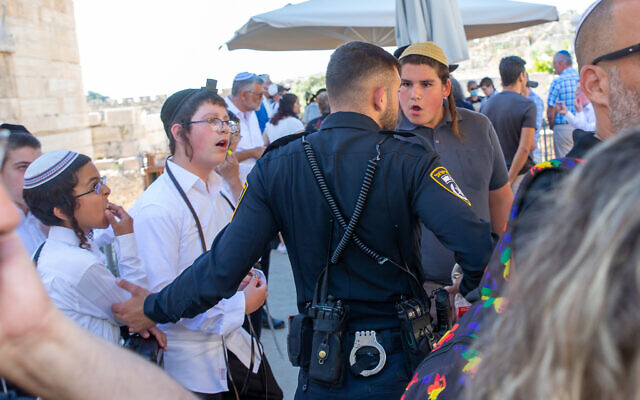 A police officer stands between a group of ultra-Orthodox youths and a bar mitzvah ceremony at the egalitarian section of the Western Wall on June 30, 2022. (Laura Ben-David)

“We respectfully feel that immediate actions should be taken to – at the very least – ensure the safety, security, and well-being of all those who come to the entire Kotel area, as well as to make certain that all worshippers are accorded the same level of respect we would expect if this were our own families – because it is our own Jewish family!” write the heads of the Jewish Agency, World Zionist Organization, Jewish Federations of North America and Keren Hayesod.

The letter was delivered to Lapid yesterday, a spokesperson for the Jewish Federations of North America says.

On Thursday, several dozen Orthodox men and boys entered the egalitarian section of the Western Wall, an area south of the main plaza also known as Robinson’s Arch, equipped with whistles and signs, as a number of families from the United States were holding hold bar mitzvah ceremonies for their children there. The youths attempted to disrupt the services, blowing the whistles, calling the worshipers “Nazis” and “animals,” and at one point ripping up a prayer book, whereupon one boy used a torn page to wipe his nose.

Lapid on Tuesday spoke out against the incident for the first time in response to a question from a journalist.

“I am against all violence at the Western Wall against people who want to pray as their faith allows them. This cannot continue,” Lapid said, speaking to reporters in Paris following a meeting with French President Emmanuel Macron.

The organization heads write that they “look forward to hearing what the government can do to immediately address this issue.

“We are prepared to work with you in any way that we can to assist in this urgent matter,” they write.