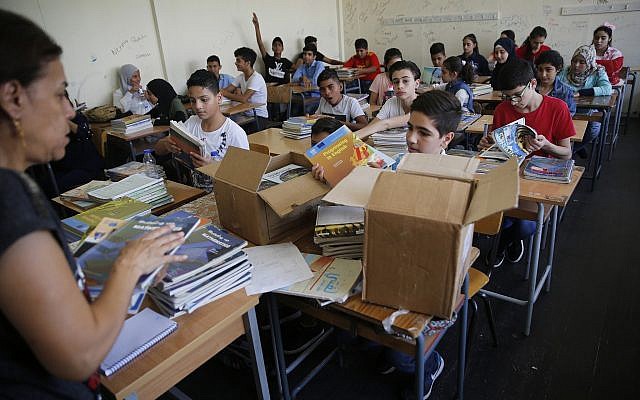 Palestinian students receive new studying books inside their classroom, during the first day of a new school year, at one of the UNRWA schools, in Beirut, Lebanon, September 3, 2018. (Hussein Malla/AP)

The UN agency for Palestinian refugees announces that it has placed six staff members on administrative leave after a report from a pro-Israel watchdog revealed that the employees published posts on social media calling for violence against Jews.

The United Nations Relief and Works Agency for Palestine Refugees (UNRWA) says the report’s release was timed to disrupt the annual donor conference earlier this week in New York but nonetheless has taken action against the staff members who violated company protocol.

Other actions taken by UNRWA included “written censures, significant fines, deferment of eligibility for promotion, and in the case of daily paid staff, up to two-year prohibitions on working for the Agency — all measures exceeding the standards set by other UN agencies,” the agency says in a statement.

The report by UN Watch that led to the sanctions revealed that one UNRWA teacher in Jordan called on Muslims to “fight against the Jews and kill them,” another in Lebanon repeatedly called to “slaughter Zionists” and another in the West Bank hailed Hamas rocket attacks on Israel.