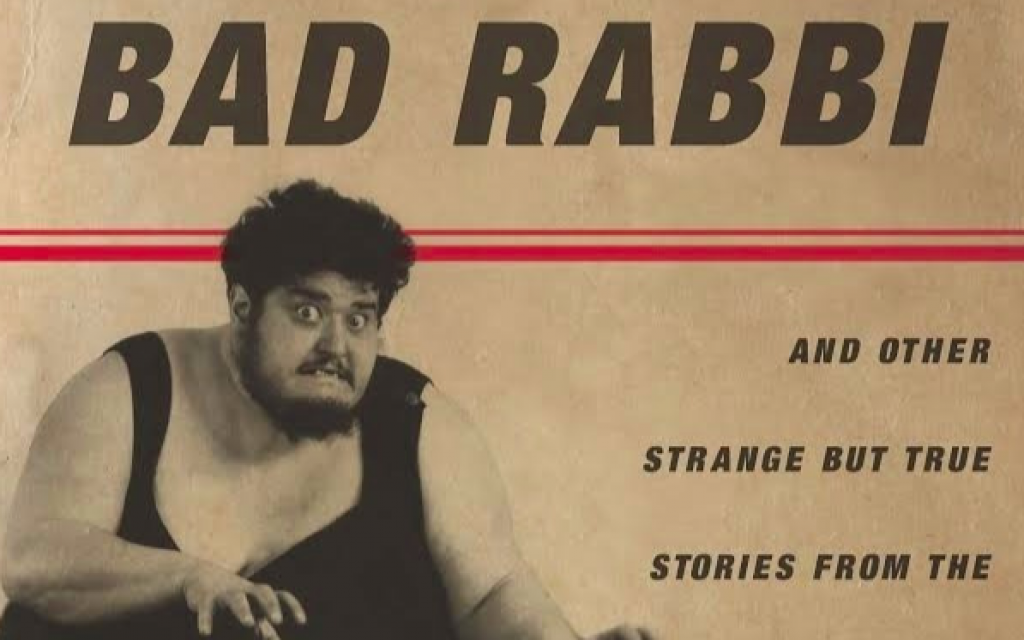 Thugs. Thieves. Blackmailers. Deadbeats. Murderers. These are the kinds of Jews who populate “Bad Rabbi and Other Strange But True Stories from the Yiddish Press,” a new book published this month by Stanford University Press.

Contrary to what Hollywood, popular culture, and family lore would have us believe, not all Jews who lived in the first part of the 20th century — in the old country and new — were pious, honorable and upwardly mobile. One need only peruse the back pages of the many Yiddish dailies published in New York, Warsaw and other heavily populated Jewish cities in the decades leading up World War II to see that life was a series of daily disasters for many average members of the tribe. 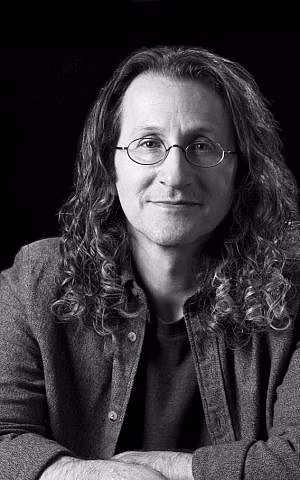 Of course, the catch is that the vast majority of today’s Jews cannot read Yiddish, and thus do not have access to the robust and ribald press read by 75 percent of the world’s Jews a century ago. These newspapers were the main source of news for Yiddish speakers, and they had everything in them, from the biggest international news items to the most bizarre local “man bites dog” stories (or “woman bites man’s penis,” as in the 1927 case of the scorned Reyzl Shulkleynot and her unfortunate ex-fiancé Feivel Goldshvartz of Warsaw).

“Bad Rabbi” author Yiddish academic Dr. Eddy Portnoy was able to access this treasure trove of bad behavior and human misery and compile the best examples of it into an illuminating and entertaining book.

With its true tales of scandal, grift and domestic abuse, “Bad Rabbi” is a powerful antidote to “Fiddler on the Roof,””All of a Kind Family,” and the many other works of fiction romanticizing both the Eastern European shtetl and the Lower East Side tenements.

“It’s true that some Yiddish writers and [Russian writer Isaac] Babel dealt with these things, but in the grand scheme of Jewish literature and historiography, this is not a major theme,” Portnoy said.

“Even Jewish gangsters have been considered upwardly mobile. I’m dealing with the downwardly mobile, the real failures,” he added.

Portnoy, exhibitions curator and senior researcher at the YIVO Institute for Jewish Research, came across these reports of the chaotic and violent lives of urban Jews while scanning Yiddish newspapers from Warsaw and New York as part of his research for his doctoral dissertation in modern Jewish studies at The Jewish Theological Seminary a decade ago. 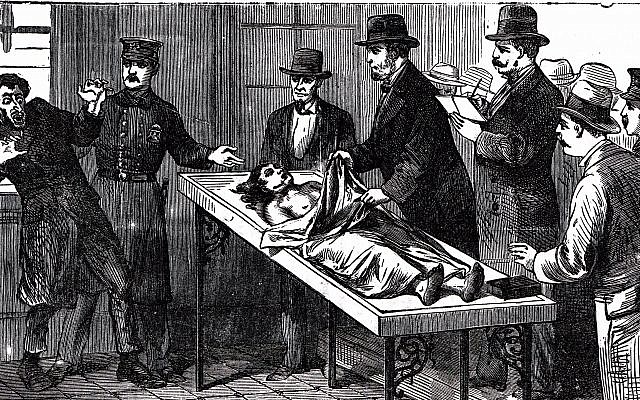 His work was on Yiddish cartoons, but in order to get to the cartoons, he had to scroll through countless microfilm pages of issues of newspapers like Warsaw’s Moment and Haynt, and Forverts, Der Morgen Zshurnal and Freiheit, which were published in New York. As he scrolled through to the back sections of the newspapers, these colorful local Jewish beat stories caught his eye.

Portnoy, 52,  realized there was once an entire world that most Jews today either forgot or never knew existed. He wrote magazine articles based on the material he had uncovered, publishing them in Tablet and the now defunct Guilt & Pleasure, eventually expanding them into “Bad Rabbi.”

According to Portnoy, it’s important to note that history books don’t always provide a full picture of Jewish life in the past, and that it is crucial to check daily newspaper accounts. He points, for instance, to the case of Pesach Rubenstein, a Russian Jewish immigrant to New York found guilty of murder in 1876. Despite his defense attorneys trying to get him off with alibis and insanity pleas, Rubenstein — painted as a religious fanatic by the press — was nailed by the prosecution with circumstantial evidence linking him to the crime scene where the pregnant victim was found. 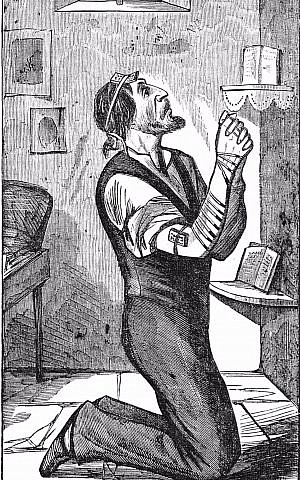 The case was a huge media sensation, covered in detail by the Yiddish and mainstream American press, and talked about for months and years afterwards. Entrepreneurial publishers printed sensational illustrated murder pamphlets of the case, and one turned the courtroom transcripts into a book.

Yet according to Portnoy, the Pesach Rubenstein case is mentioned in only a few Jewish history books — and only briefly at that.

“This episode was not good for the general perception of Jews in America, which is likely why most of the Jewish community chose to ignore it. But what’s worse is that the later historians also chose to ignore this first major interface between Jews, the justice system, and the press in America,” wrote Portnoy.

“In the end, murder never really caught on as a form of conflict resolution among the Jews. Instead, they seem to prefer feigned outrage, flailing arms, and raised voices to a ‘segar knife’ in the throat,” he wrote with the wit he employs throughout “Bad Rabbi.”

However, low-level violence is a constant presence in the tales Portnoy brings from the Yiddish press, especially from Warsaw. It seems that slaps, kicks and punches were part of the daily discourse of Jews in the lower socioeconomic classes in Eastern Europe. Wives attacked husbands, husbands attacked wives, followers of one rabbi attacked the followers of another, and petitioners attacked rabbis presiding at the rabbinical court. 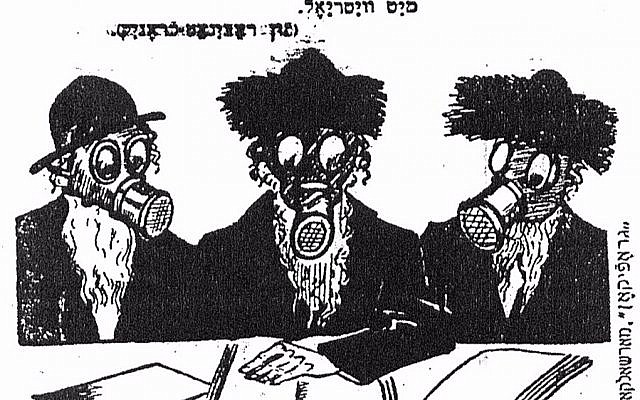 Detail from cartoon titled, ‘Gas Masks as a Means of Protection in the Rabbinate,’ and the caption reads, ‘Nu, we can start. Call in the couple who wants a divorce. We are fully protected.’ (Source: Haynt, December 30, 1928. Courtesy of the YIVO Institute for Jewish Research)

Portnoy devotes an entire chapter, titled, “Shomer Fucking Shabbos” about “Enforcer” gangs roving Warsaw’s Jewish neighborhoods and “taking a mortgage out on” (beating the crap out of) anyone they spied transgressing the Sabbath — lest we think that this is a phenomenon whose origins dates only to more recent years.

The book’s title chapter is about the sordid story and legal woes of Shmuel Shapira, also known as the Radimner Rebbe, who got himself into a TransAtlantic case of bigamy and blackmail in 1927. There wasn’t much physical violence here, just plenty of wild accusations, name calling, and extortion — not to mention a fake pregnancy claimed by a woman well past menopause.

“For their part, Warsaw’s larger-circulation Yiddish newspapers thought the pageant was something between the idiotic and the asinine,” wrote Portnoy.

Nonetheless, hundreds of young women from all over Poland entered the contest by sending their photos in to the Nosh Psheglond offices. Readers narrowed the contestants down to a top-10 group, and then a panel of “experts” crowned Judyta (aka Zofia Oldak) winner. (It just so happened that Oldak’s photo had appeared in the paper a month earlier when she had been crowned winner of the Yiddish Press Ball.) 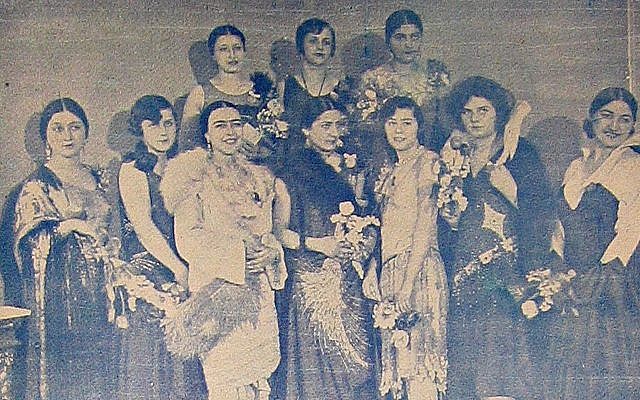 As might be expected, the contest boosted Nosh Psheglond’s circulation, and also led to grumblings that the pageant had been fixed, the first of several scandals that snowballed out of control.

“It’s a roiling, crazy story that had everyone in Jewish society involved. It has it all,” said Portnoy.

Portnoy found the quality of the journalism in the back pages of the Yiddish dailies often excellent, especially in the longer stories for which writers were not on tight deadlines. He brings several good examples by the famous Israel Joshua Singer (brother of Isaac Bashevis Singer), who wrote under the pseudonym Gimel Kuper as the Warsaw correspondent for New York’s Forverts. 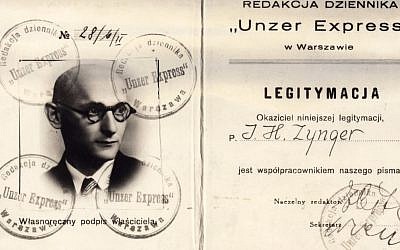 Israel Joshua Singer’s press identification card for Unzer Ekspres, a Warsaw daily
that ran from 1928 to 1939. Courtesy of the YIVO Institute for Jewish Research.

In Singer’s and others’ accounts, subjects were often referred to by nicknames. For instance, in his “Warsaw’s Jewish Criminals Mete Out Sentences In Their Own Private Courtrooms” dispatch from December 21, 1927, Singer wrote of real-life characters he called “Puny Khane,” “Simshon Gramophone,” and “Khaym-Yosl Jackass.”

“It’s part of a funny, snarky, homey atmosphere that you find in the Yiddish press, especially in the shorter pieces in the Warsaw Yiddish papers. The people written about were viewed by the writers and readers as neighborhood characters, and even family members,” Portnoy said.

Don’t feel guilty chuckling your way through “Bad Rabbi” as you read about the crazy deeds and commonplace misfortunes of marginal Jews from a century ago. By all accounts, they knew how to laugh at themselves.

“The destruction of Eastern European Jewry has rendered our view of these people as unnatural. These people lived their lives just like everyone else,” Portnoy said.