British Chief Rabbi Ephraim Mirvis, who last month took an unprecedented stand against the Labour party, says that although the election is over, there are still many challenges that must be faced, including anti-Semitism and Islamophobia.

“The election may be over, but concerns about the resurgence of anti-Semitism very much remain,” Mirvis says in a statement.

“Islamophobia, racism and other forms of prejudice continue to afflict our communities and, as has been well publicized, even our political parties,” Mirvis says. “It is vital that we now bring the country together, ensuring that the voices of people from across our society are heard and respected. We must focus on our shared values and leave all hatred and prejudice far behind us.”

In a column published last month, Mirvis said he was compelled to intervene in politics because Britain’s Jews were “gripped by anxiety” over the future of the community and of Judaism in the country amid the prospect of a Labour win.

Without explicitly calling on people not to vote for Labour, or even mentioning Corbyn by name, Mirvis warned that “a new poison – sanctioned from the top – has taken root in the Labour Party.”

Prime Minister Boris Johnson, whose Conservative Party beat Corbyn’s Labour in a landslide victory, has in the past been accused of Islamophobia, including saying that burqa-wearing women looked like “letter boxes.” 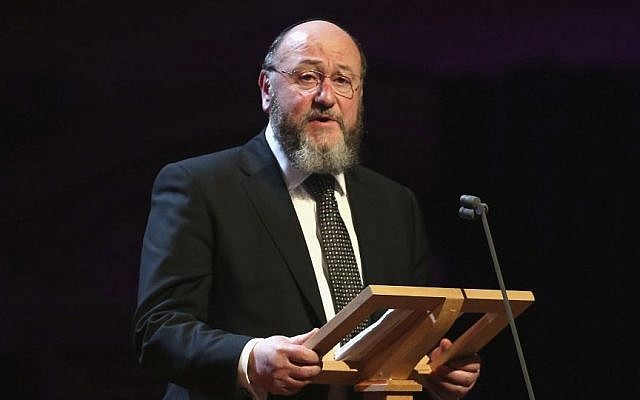 Illustrative: Chief Rabbi Ephraim Mirvis gives a speech as he attends a Holocaust Memorial Day Ceremony at Central Hall Westminster, January 27, 2015. (AP/Chris Jackson)
It's not (only) about you.