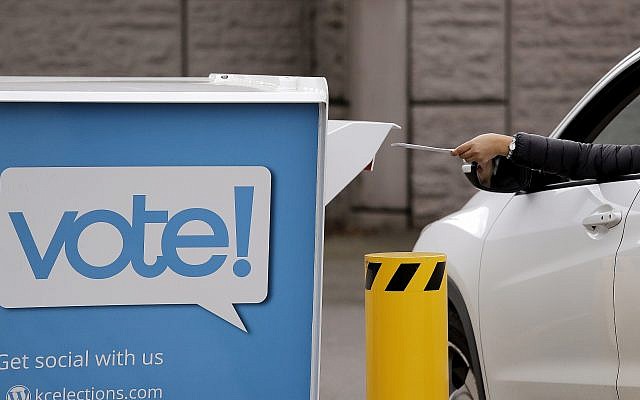 A driver drops a ballot into a drop box at the King County Elections office, November 5, 2018, in Renton, Wash. (Elaine Thompson/AP)

SAN FRANCISCO, United States — Facebook said Monday it had blocked some 30 accounts on its platform and 85 accounts on photo-sharing social network Instagram over concerns they may be linked to foreign entities and aimed at interfering in US midterm elections.

The announcement came shortly after US law enforcement and intelligence agencies said they had no indication of efforts to disrupt election infrastructure but that Americans should be wary of Russian attempts to spread fake news.

A study published last week found that misinformation on social media was spreading at a greater rate than during the run-up to the 2016 presidential vote, which Russia is accused of manipulating through a vast propaganda campaign in favor of US Donald Trump, the eventual winner.

“On Sunday evening, US law enforcement contacted us about online activity that they recently discovered and which they believe may be linked to foreign entities,” Facebook said in a blog post.

“Our very early-stage investigation has so far identified around 30 Facebook accounts and 85 Instagram accounts that may be engaged in coordinated inauthentic behavior.

“We immediately blocked these accounts and are now investigating them in more detail.”

It added all the Facebook pages associated with the accounts appeared to be in French or Russian languages.

The Instagram accounts were mostly in English, with some “focused on celebrities, others political debate.”

“Typically, we would be further along with our analysis before announcing anything publicly. But given that we are only one day away from important elections in the US, we wanted to let people know about the action we’ve taken and the facts as we know them today,” Facebook added.

Despite an aggressive crackdown by social media firms, so-called “junk news” is spreading at a greater rate than in 2016 on social media ahead of the US midterm elections, Oxford Internet Institute researchers said in a study published Thursday.

Twitter said Saturday it deleted a “series of accounts” that attempted to share disinformation without giving a number.