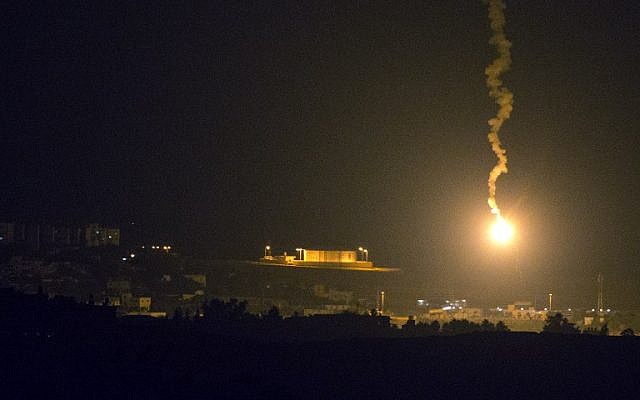 The Israeli military said in a statement that in response to the projectile attack in the Hof Ashkelon Regional Council earlier Tuesday, “IAF aircraft targeted two Hamas posts in the northern Gaza Strip.”

A medical official at the Shifa Hospital in Gaza City said three people were being treated for injuries, including a 26-year-old man who was in critical condition after being struck in the head with shrapnel.

Videos and photos, allegedly of the Israeli strikes, were circulating on social media.

Footage of the Israeli strikes that targeted several areas in #Gaza pic.twitter.com/nRb3F2j8J1

On Tuesday evening, warning sirens blared in southern Israel as the rocket from the Gaza Strip was fired into the country. It struck an open area in the Hof Ashkelon Regional Council, the army said.

While no group immediately claimed Tuesday’s rocket fire, Israel holds Hamas responsible for all rockets emanating from the Strip.

Hamas, the terror group that rules Gaza, has largely refrained from firing rockets into Israel since it fought a devastating war with Israel in 2014. Launches have often been ascribed to radical Salafist groups.

Last month, the IDF said that a rocket fired from Gaza landed in an open area of the Sha’ar Hanegev Regional Council, after earlier saying that the rocket had exploded in mid-air.

In June, the Israel Air Force struck a number of targets tied to the Hamas terror group in response to a rocket launch from the coastal enclave.

In recent months, a number of false warning sirens have also been heard in southern Israel.