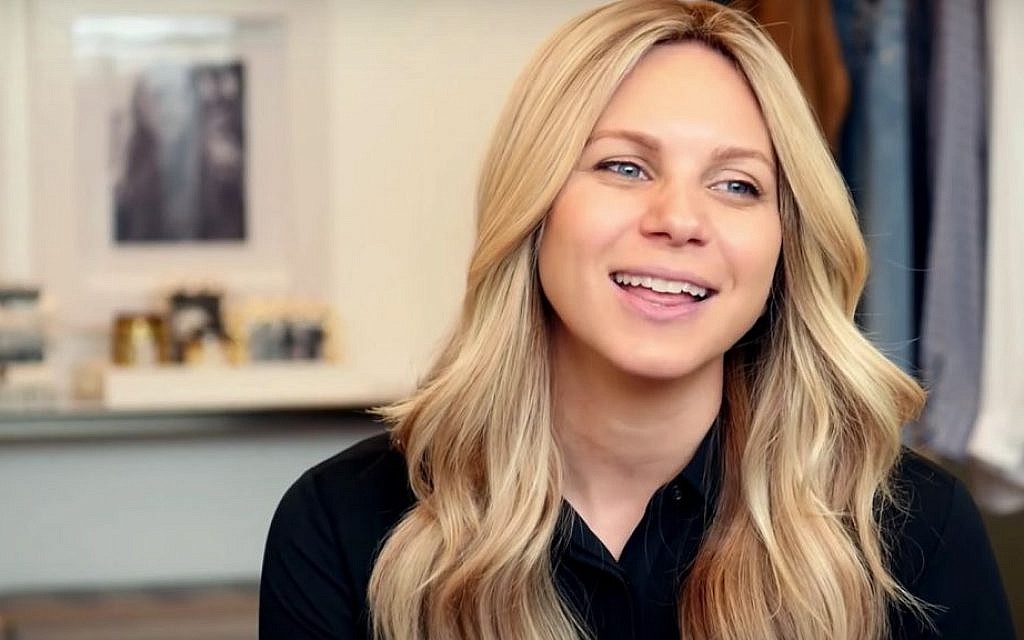 Designer Joyce Azaria: 'I’m very passionate about fashion as a way to express yourself and exist in the world.' (YouTube screenshot)

A surprisingly down-to-earth empress of fashion, Joyce Azria once led a division of her family’s business, BCBG Max Azria. Now she is the brains behind a new brand at her own company, with a big name: “Avec Les Filles: A Story Told by Joyce Azria.”

“I’m very passionate about fashion as a way to express yourself and exist in the world,” Azria says. “Fashion is the first thing people see, even before they know anything about you. It’s an entry point to self.” 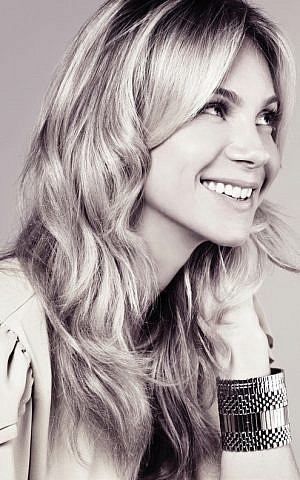 Although eerily relevant, the concept has nothing to do with the recent Women’s Marches, which indeed brought more pink to the public.

“One day, we’ll get into the retail footprint,” Azria says. “For now, we are extremely excited to be launching our apparel collection exclusively with Macy’s.”

Naturally, this being the digital age, the brand already manages an Instagram presence. Azria has many more ideas, still under wraps, in the pipeline. A documentary and a book are already in the making.

“I started to formulate some thoughts about a millennial,” says Azria, who once showed it to an agent, then realized she had another task ahead. “I had re-pivoted my life from Chanel to Shabbat, but I hadn’t repositioned my work life.”

Enter Avec Les Filles. Born in France, Azria’s mother was a dancer with the Paris Opera Ballet and her father, before immigrating to the States in the early 1980s from Paris, was once an actor. Azria also studied dance as a child.

Inspired by her love of ballet and its classic palette, Azria’s current endeavor was an outgrowth of her as-yet unpublished book about her former career at BCBGeneration, which she brought to $400 million in sales. 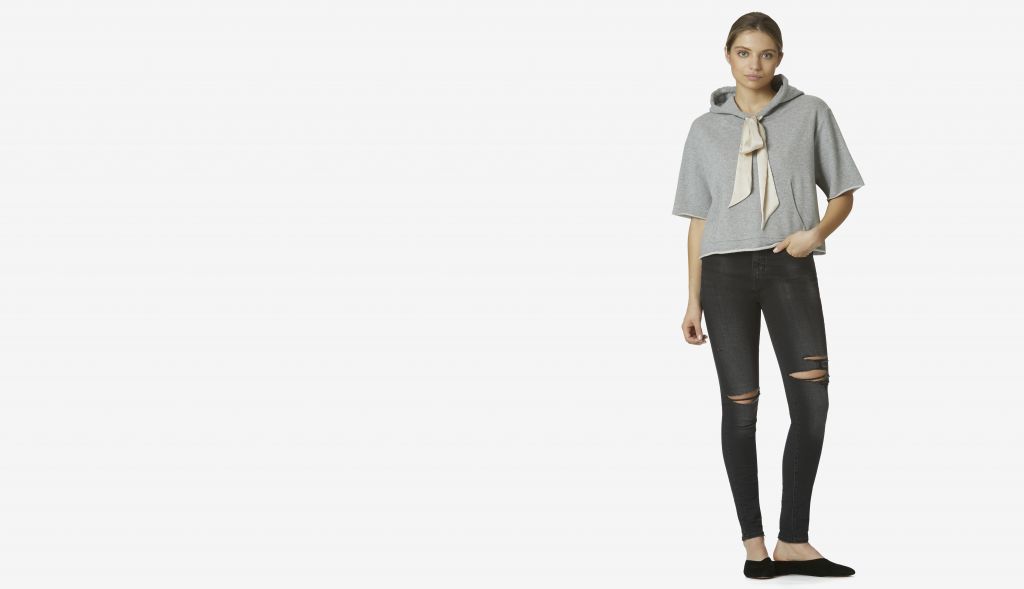 With storytelling at the heart of Avec Les Filles, which translates from her native French to “with the girls,” she is in her own words, “living the brand with the consumer.”

A petite powerhouse, the 35-year-old daughter of Tunisian-born designer Max Azria stands at 5’2”. This married mother of five sports a stylish, often black wardrobe, with slacks under skirts, signature heels and a long blonde wig. Although she once appeared at public events in mini dresses, Azria is Orthodox, self-described as “deeply spiritual.”

‘First the Rebbe, and then I go do what I want’

“When people ask me, I just say I’m an Orthodox Jew. By minhag [custom], and my rabbi, I identify most with Chabad,” Azria says. “I don’t go to New York without visiting the Ohel [Rabbi Menachem Mendel Schneerson’s tomb]. First the Rebbe, and then I go do what I want.”

Her new label, Avec Les Filles, is decidedly wearable every day, with blouses, bottoms, dresses and outerwear in ballet pink, soft grey, black and other neutrals — khaki, navy, charcoal — and a few prints with touches of yellow and red. Feminine details combine with edgier elements in a leather jacket with exposed silver zippers and a zip-up, Chanel-inspired, made-in-France piece Azria calls a city jacket in navy with black leather accents.

Her “hybrid contemporary lifestyle brand” includes black leather pants, satin bomber jackets, striped tees and oversized hoodies embroidered at the hip with “filles.” Fine jewelry is available exclusively online. Her footwear, which is available at Bloomingdale’s and Lord & Taylor, as well as at Macy’s, include sandals that wrap up the ankle and embroidered slip-ons called “The Bella.” Inspired by her grandmother Rachel’s house slippers, these wedges are re-designed as street wear.

“She would come home and throw on her house slippers,” Azria says. “For me, I come home, my heels come off, my sheitl [wig] comes off. And then, I’m mommy.” 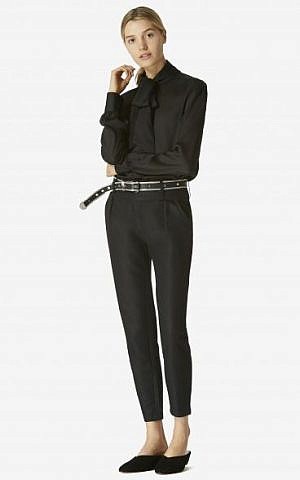 For Azria, whose line includes a variety of designs, some more modest than others, fashion presents no conflict with her observance.

Located nearby her home, Avec Les Filles is housed on gritty, graffiti-filled Melrose Avenue across from bustling Fairfax High School. A street wall with angel wings draws frequent passers by who pose for photos, unaware a fashion start-up operates mere feet away.

The unmarked storefront is distinguished only by a foot-long, Chabad-style mezuza. The large main room resembles something out of “Project Runway.” Design boards with sketches of clothing and shop concepts, fabrics and images offering inspiration for color and new creations fill the walls. Sample racks and shelves are filled with dresses, tops, shoes and more. A pretty in pink double-wicked Volupsa candle in Japanese Plum Bloom burns next to Azria’s large Apple flat screen monitor.

Jewish details catch a reporter’s attention. A random black silk yarmulke sits on a desk. A shimmery, prism-filled framed colorful Star of David by Israeli artist Agam hangs on the wall behind Azria’s desk next to her vision board, filled with inspirational words cut from magazines such as, “Jerusalem,” “Meron,” “Success” and “Hitting Pause.” Assorted Jewish items dot the landscape: her prayer book, a “pushke” [charity box], a blessing from a rabbi in Hebrew. 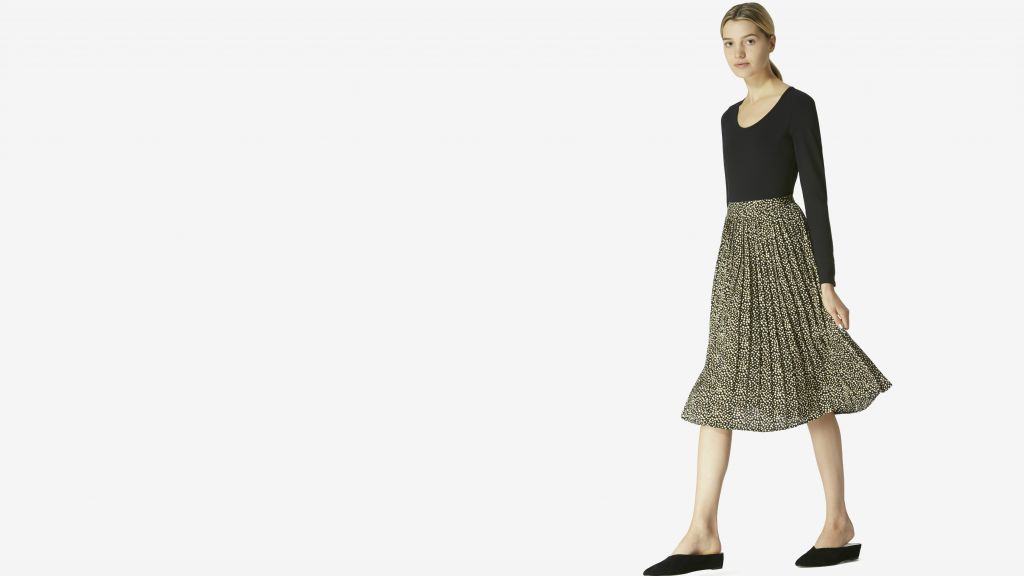 A skirt and top ensemble by Avec le Filles. (Courtesy)

Lunch is, of course, kosher, from popular Fish Grill. And croissants and other fresh pastries from the morning’s meeting are, bien sur, from Delice, the local kosher French bakery.

‘There is a true story happening today’

When her tzitzit-and-kippa clad second husband, Ilan Trojanowski, who is French Israeli, drops by, they share a quick exchange.

“We put all of our energy here,” he says. “I’m hiding behind the veil. We do everything together.”

As Azria says, “He kills bugs, takes out the trash and makes big decisions with us.”

Schooled in fashion as a child, Azria began working in the family business at 16. Like her native French, the language of the industry is simply part of her.

“There is a true story happening today,” Azria announced at a Women’s Wear Daily event where she shared her story with fashion insiders.

Even her mailing list is a story in the making, with subscribers submitting their name as a part of promise.

The line spans from a $28 T-shirt to a $595 coat, a $38 woven top, a $298 French city jacket and a $348 leather jacket. High and low end pricing speaks to younger shoppers with a breadth Azria suggests allows the millennial shopper to tell her own story. A woven top sewn in sweatshirt fabric is paired with a pink satin ribbon drawstring ($48), and “paper bag pants” feature a large fabric belt ($68). This diversification appeals to a larger audience. 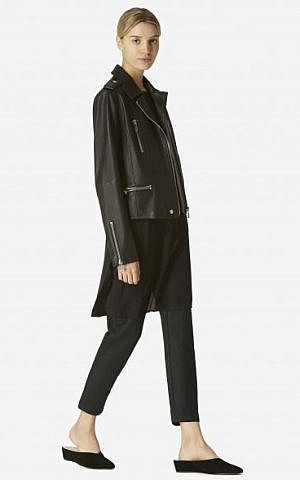 Joyce Azria, founder of Avec Les Filles, says there is always something in her line for those who keep the laws of modesty. (Courtesy)

No detail has escaped attention. Everything from size tickets to dynamic packaging includes what she calls a “surprise and delight” moment that is Instagram-worthy to make “sure our story is heard on all platforms,” she says.

“Our subliminal message is we don’t sell clothes,” Azria says in her WWD presentation. “With a foundation in everyday value-priced wardrobe builders, a collection of trend-driven impulse purchases, and a tier of aspirational styles with high perceived value, a millennial feels fulfilled in all of her wants and needs.”

Straight out of high school, Azria skipped college and started with her family business as an intern, circling through BCBG’s many departments. By the time she left the company, she was creative director of BCBGeneration, which now, as part of parent company BCBGMaxAzriaGroup, is under restructuring by Guggenheim Partners. Her father, Max Azria, is on paid leave.

Azria has worked quickly to bring her new brand to market.

“It’s been five to six months total,” she says. “We’re launching faster than any brand I know… When you have the right partners in everything you do, then time is exponential. Everyone is working with deeper commitments. Then the impossible is possible.”

As Azria is fond of saying, “When you are being truthful to yourself, you survive in the world.”