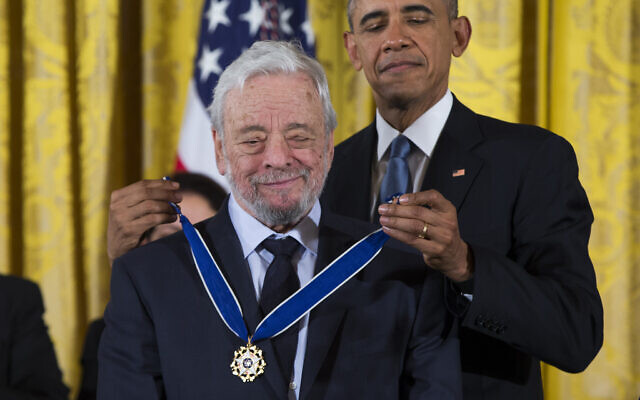 Then-US president Barack Obama (right) presents the Presidential Medal of Freedom to composer Stephen Sondheim during a ceremony in the East Room of the White House, on November 24, 2015, in Washington, DC. (AP Photo/Evan Vucci, File)

NEW YORK (AP) — In 2010, the year he turned 80, Stephen Sondheim had to endure a public fuss when a Broadway theater was being renamed in his honor.

At a ceremony outside the 1,055-seat auditorium on West 43rd Street, the composer looked sheepish by the time he got to the podium following gushing words from admirers that included Patti LuPone and Nathan Lane. He also offered up a window into his psyche.

“I’m thrilled, but deeply embarrassed,” he said, tearing up as a mid-September sun fell over the Stephen Sondheim Theatre. “I’ve always hated my last name. It just doesn’t sing.”

The comment revealed how Sondheim’s brilliant musicality and his perfectionism went hand-in-hand. The theatrical giant, who died Friday at 91, was as complex as his lyrics, dogmatic in his rules and not generous with praise about his work.

A driven, obsessive purist, he was also a magician, creating lyrics and music to such towering shows as “A Little Night Music,” “Into the Woods,” “Company,” “Follies” and “Sunday in the Park with George.”

But he was also his worst critic. Take, for example, his feeling about the iconic song “America” from “West Side Story,” for which he supplied the lyrics to Leonard Bernstein’s music.

“Some lines of this lyric are respectably sharp and crisp, but some melt in the mouth as gracelessly as peanut butter and are impossible to comprehend, such as ‘For a small fee in America,’ which smashes the l’s and the f’s together, making it sound like ‘For a smafee,’” he wrote in his autobiographical self-critique, which took two volumes.

To the rest of us, Sondheim was genius, whether with the simple lament, “The sun comes up/I think about you/The coffee cup/I think about you,” or the slightly paranoid, “Be careful the things you say/Children will listen,” or the sublime “Marry me a little/Do it with a will/Make a few demands/I’m able to fulfill.”

Six of Sondheim’s musicals won Tony Awards for best score, and he also received a Pulitzer Prize (“Sunday in the Park”), an Academy Award (for the song “Sooner or Later” from the film “Dick Tracy”), five Olivier Awards and the Presidential Medal of Honor. In 2008, he received a Tony Award for lifetime achievement.

He had been working on a new musical with “Venus in Fur” playwright David Ives, who called his collaborator a genius. “Not only are his musicals brilliant, but I can’t think of another theater person who has so chronicled a whole age so eloquently,” Ives said in 2013. “He is the spirit of the age in a certain way.”

Early in his career, Sondheim wrote the lyrics for two shows considered to be classics of the American stage, “West Side Story” (1957) and “Gypsy” (1959). “West Side Story” transplanted Shakespeare’s “Romeo and Juliet” to the streets and gangs of modern-day New York. “Gypsy,” with music by Jule Styne, told the backstage story of the ultimate stage mother and the daughter who grew up to be Gypsy Rose Lee.

It was not until 1962 that Sondheim wrote both music and lyrics for a Broadway show, and it turned out to be a smash — the bawdy “A Funny Thing Happened on the Way to the Forum,” starring Zero Mostel as a wily slave in ancient Rome yearning to be free.

Yet his next show, “Anyone Can Whistle” (1964), flopped, running only nine performances but achieving cult status after its cast recording was released. Sondheim’s 1965 lyric collaboration with composer Richard Rodgers — “Do I Hear a Waltz?” — also turned out to be problematic. The musical, based on the play “The Time of the Cuckoo,” ran for six months but was an unhappy experience for both men, who did not get along.

It was “Company,” which opened on Broadway in April 1970, that cemented Sondheim’s reputation. The episodic adventures of a bachelor (played by Dean Jones) with an inability to commit to a relationship was hailed as capturing the obsessive nature of striving, self-centered New Yorkers. The show, produced and directed by Hal Prince, won Sondheim his first Tony for best score. “The Ladies Who Lunch” became a standard for Elaine Stritch.

The following year, Sondheim wrote the score for “Follies,” a look at the shattered hopes and disappointed dreams of women who had appeared in lavish Ziegfeld-style revues. The music and lyrics paid homage to great composers of the past such as Jerome Kern, Cole Porter, and the Gershwins.

In 1973, “A Little Night Music,” starring Glynis Johns and Len Cariou, opened. Based on Bergman’s “Smiles of a Summer Night,” this rueful romance of middle-age lovers contains the song “Send in the Clowns,” which gained popularity outside the show. A revival in 2009 starred Angela Lansbury and Catherine Zeta-Jones was nominated for a best revival Tony.

“Pacific Overtures,” with a book by John Weidman, followed in 1976. The musical, also produced and directed by Prince, was not a financial success, but it demonstrated Sondheim’s commitment to offbeat material, filtering its tale of the westernization of Japan through a hybrid American-Kabuki style. 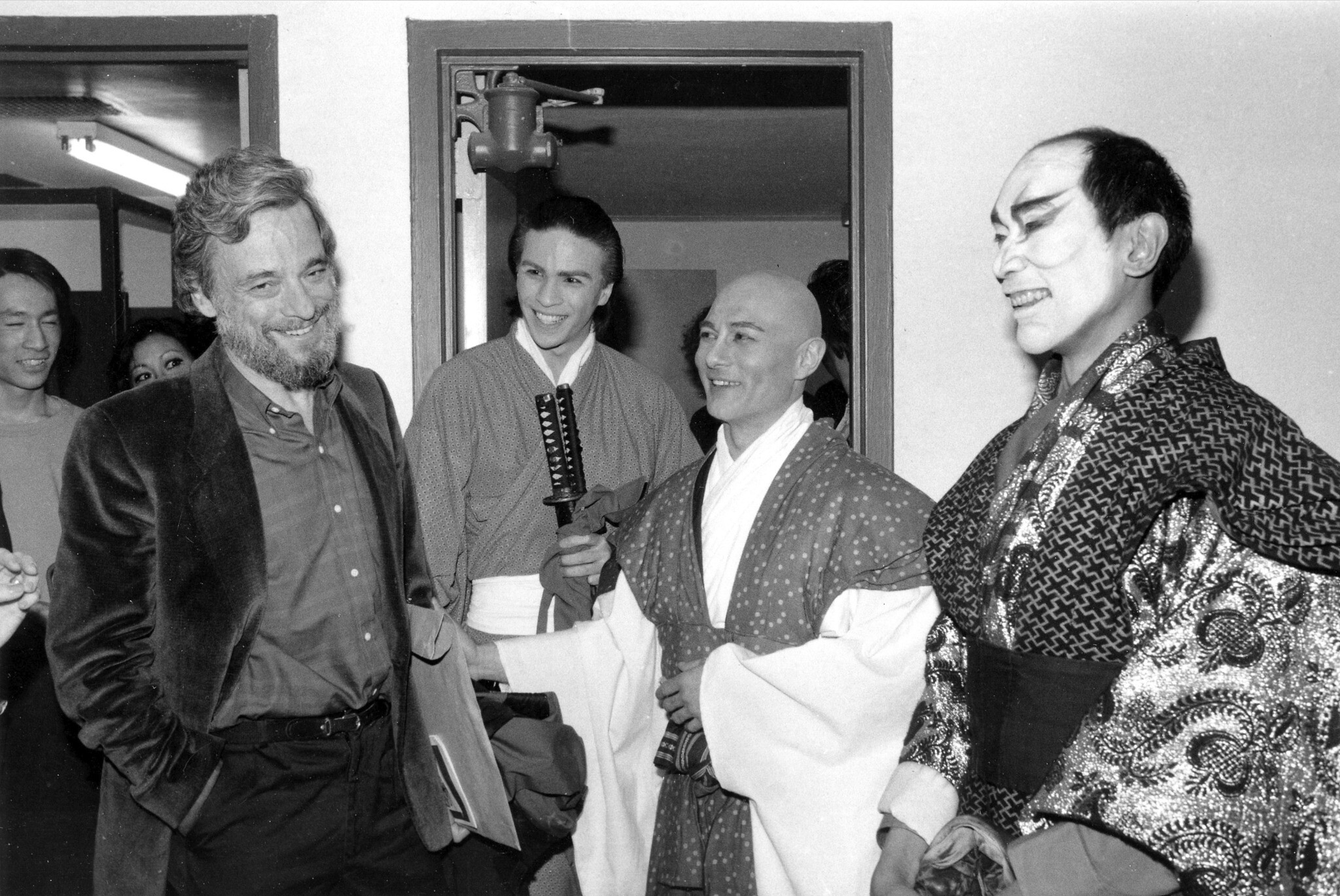 Composer-lyricist Stephen Sondheim (left) is shown with cast members of ‘Pacific Overtures’ after the closing performance of the revival musical at New York’s Church of the Heavenly Rest at York Theater, on Sunday, April 14, 1984. The actors are, from left, Kevin Gray, Ernest Ababa, and Tony Marino. (AP Photo, File)

In 1979, Sondheim and Prince collaborated on what many believe to be Sondheim’s masterpiece, the bloody yet often darkly funny “Sweeney Todd.” An ambitious work, it starred Cariou in the title role as a murderous barber whose customers end up in meat pies baked by Todd’s willing accomplice, played by Angela Lansbury.

The Sondheim-Prince partnership collapsed two years later, after “Merrily We Roll Along,” a musical that traced a friendship backward from its characters’ compromised middle age to their idealistic youth. The show, based on a play by George S. Kaufman and Moss Hart, only ran two weeks on Broadway. But again, as with “Anyone Can Whistle,” its original cast recording helped “Merrily We Roll Along” to become a favorite among musical-theater buffs.

“Sunday in the Park,” written with James Lapine, may be Sondheim’s most personal show. A tale of uncompromising artistic creation, it told the story of artist Georges Seurat, played by Mandy Patinkin. The painter submerges everything in his life, including his relationship with his model (Bernadette Peters), for his art. (It was most recently revived on Broadway in 2017 with Jake Gyllenhaal.)

Three years after “Sunday” debuted, Sondheim collaborated again with Lapine, this time on the fairy-tale musical “Into the Woods.” The show starred Peters as a glamorous witch and dealt primarily with the turbulent relationships between parents and children, using such famous fairy-tale characters as Cinderella, Little Red Riding Hood and Rapunzel. It was most recently revived in the summer of 2012 in Central Park by The Public Theater.

“Assassins” opened off-Broadway in 1991 and it looked at the men and women who wanted to kill presidents, from John Wilkes Booth to John Hinckley. The show received mostly negative reviews in its original incarnation, but many of those critics reversed themselves 13 years later when the show was done on Broadway and won a Tony for best musical revival.

“Passion” was another severe look at obsession, this time a desperate woman, played by Donna Murphy, in love with a handsome soldier. Despite winning the best-musical Tony in 1994, the show barely managed a six-month run. Composer and lyricist Stephen Sondheim poses after being awarded the Freedom of the City of London at a ceremony at the Guildhall in London, on September 27, 2018. (AP Photo/Kirsty Wigglesworth, File)

A new version of “The Frogs,” with additional songs by Sondheim and a revised book by Nathan Lane (who also starred in the production), played Lincoln Center during the summer of 2004. The show, based on the Aristophanes comedy, originally had been done 20 years earlier in the Yale University swimming pool.

One of his more troubled shows was “Road Show,” which reunited Sondheim and Weidman and spent years being worked on. This tale of the Mizner brothers, whose get-rich schemes in the early part of the 20th century finally made it to the Public Theater in 2008 after going through several different titles, directors and casts.

Sondheim wrote infrequently for the movies. He collaborated with actor Anthony Perkins on the script for the 1973 murder mystery “The Last of Sheila,” and besides his work on “Dick Tracy” (1990), wrote scores for such movies as Alain Resnais’ “Stavisky” (1974) and Warren Beatty’s “Reds” (1981).

Over the years, there have been many Broadway revivals of Sondheim shows, especially “Gypsy,” which had reincarnations starring Angela Lansbury (1974), Tyne Daly (1989), and Peters (2003). But there also were productions of “A Funny Thing,” one with Phil Silvers in 1972 and another starring Nathan Lane in 1996; “Into the Woods” with Vanessa Williams in 2002; and even of Sondheim’s less successful shows such as “Assassins” and “Pacific Overtures,” both in 2004. “Sweeney Todd” has been produced in opera houses around the world. A reimagined “West Side Story” opened on Broadway in 2020 and this year an off-Broadway “Assassins” opened off-Broadway at Classic Stage Company and a scrambled “Company” opened on Broadway with the gender of the protagonist switched. A film version of “West Side Story” is to open this December directed by Steven Spielberg.

Sondheim’s songs have been used extensively in revues, the best-known being “Side by Side by Sondheim” (1976) on Broadway and “Putting It Together,” off-Broadway with Julie Andrews in 1992 and on Broadway with Carol Burnett in 1999. The New York Philharmonic put on a star-studded “Company” in 2011 with Neil Patrick Harris and Stephen Colbert. Tunes from his musicals have lately popped up everywhere from “Marriage Story” to “The Morning Show.” He himself was most recently portrayed on film by Bradley Whitford in “Tick, Tick… BOOM!” directed by Lin-Manuel Miranda. “It’s scary to have that obligation but Lin was there to pull the blood out of me,” Whitford told The Hollywood Reporter.

That’s why we come to work every day - to provide discerning readers like you with must-read coverage of Israel and the Jewish world.