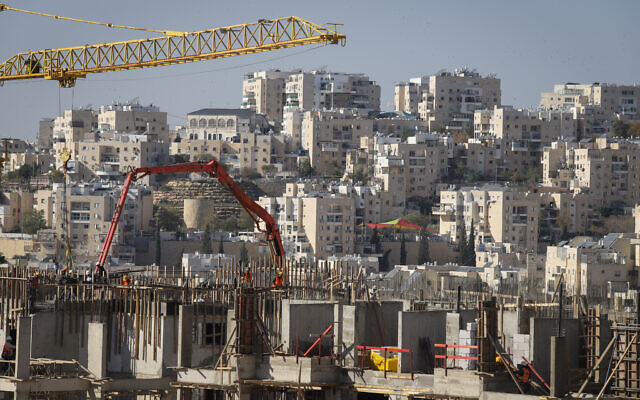 Construction work for new housing in the West Bank settlement of Modi'in Illit, on January 11, 2021. (Flash90)

A Defense Ministry panel on Wednesday approved fresh construction in several West Bank settlements, the first such move since the establishment of the new government headed by Prime Minister Naftali Bennett.

The Civil Administration’s High Planning Subcommittee gave the green light to 31 projects, including the building of a mall in Mishor Adumim, a special needs school in the settlement of Elkana, and synagogues and Jewish seminaries in Karnei Shomron and Kfar Adumim.

Responding to the move, the Yesha Council settlement umbrella group demanded that the High Planning Subcommittee convene again to approve the building of West Bank settlement homes and not just public building projects.

“We’ve been waiting for half a year for the approval of homes and it still hasn’t happened,” the group said in a statement. “The building committee must immediately convene to approve the building of housing units throughout the region. We’ve waited long enough.”

Joint List leader Ayman Odeh, however, condemned the new government for approving any building in the settlements.

“The government has existed for less than two weeks and has already approved 31 building plans in the settlements,” he tweeted. 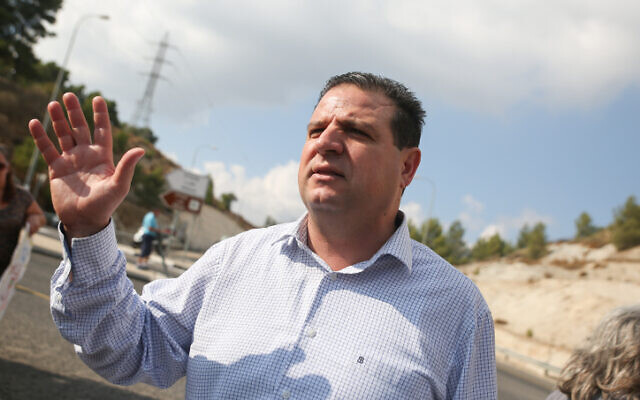 Joitn List party leader Ayman Odeh participates along with residents of the northern Israeli Arab town of Akbara in a demonstration against a ‘price tag’ attack that was carried out in their village, November 1, 2019. (David Cohen/FLASH90)

“The left caves to the right and sidelines the diplomatic issue, but the right continues to sabotage the prospects for peace and deepen the occupation, the oppression and dispossession of millions of Palestinians,” added Odeh, who heads the prominently Arab Israeli opposition faction.

The approval comes after Foreign Minister Yair Lapid said Monday that an illegal West Bank outpost will be razed in accordance with army orders and that the issue will not be a source of division within the fragile coalition government.

In his first public remarks about the Evyatar outpost since taking office, Lapid, who is also alternate prime minister, told Zman Israel, The Times of Israel’s Hebrew sister site, that the fate of the community was not in doubt.

“The outpost will be evacuated,” he said. “It is illegal. It is not at all a question of right or left. It is an order from the army and the civil administration.”

Lapid’s remarks came the day after the army rejected an appeal from settlers against razing the outpost.

Local Palestinian residents say they historically worked the land on which the outpost was built, but that the Israeli army has recently prevented them from reaching the area. The Civil Administration, an Israeli military body that manages Palestinian civilian affairs — including West Bank land registration — says it has not determined to whom the land belongs. According to West Bank property laws, uncultivated land can revert back to public ownership. 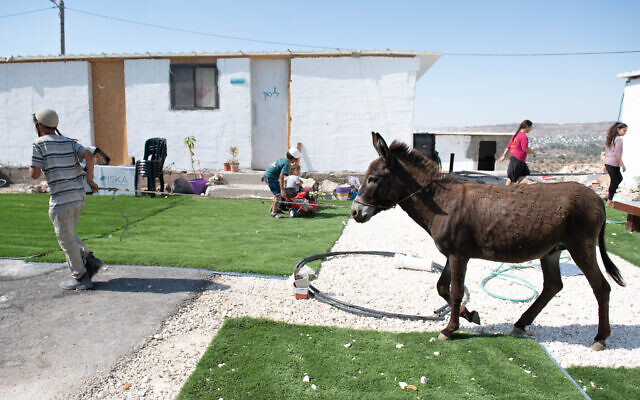 The outpost has quickly grown over the last two months, swelling to roughly 50 buildings for dozens of families. The outpost’s Facebook page boasts that Evyatar prevents contiguity between the surrounding Palestinian villages while connecting the Israeli settlement of Tapuah to the Za’atara Junction and Migdalim settlement.

The Biden administration is widely expected to restore Washington’s stance against settlement construction. During an official visit by then-vice president Biden in 2010, the Interior Ministry announced that 1,600 housing units would be built in the Jerusalem neighborhood of Ramat Shlomo. The declaration incensed Biden, as Washington was opposed to Israeli construction in East Jerusalem, which the Palestinians want as the capital of a future state.