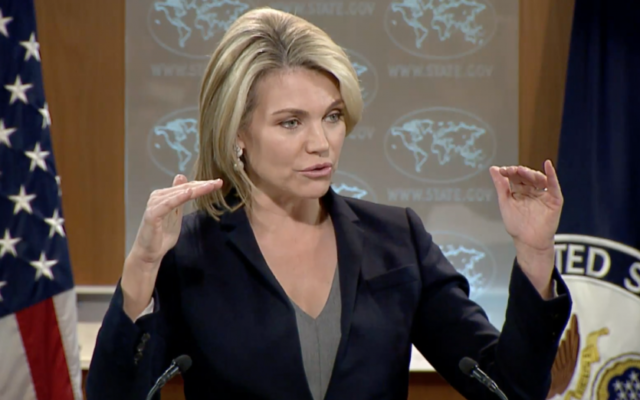 US State Department Spokeswoman Heather Nauert speaks to reporters during a press conference in Washington, D.C. on June 6, 2017 (screen capture)

WASHINGTON — A State Department official said Tuesday that Israelis and Palestinians will “be forced to compromise” in order to achieve US President Donald Trump’s goal of brokering peace between the two sides.

In her first press briefing as the department’s spokesperson, Heather Nauert wouldn’t address a question about UN Secretary-General Antonio Guterres’s statement lamenting 50 years of Israel’s occupation of the West Bank, but pivoted to say that both Trump and Secretary of State Rex Tillerson were committed to forging an agreement despite the inevitable challenges that will arise.

“Middle East peace is something that’s very important to this administration,” Nauert told reporters. “The president and the secretary have both said they recognize that it will not be easy, that both sides will be forced to compromise.”

Tillerson, for his part, recently told reporters that Trump was “very forceful” with both Prime Minister Benjamin Netanyahu and Palestinian Authority President Mahmoud Abbas during his trip to the region last month, in which he sought to jumpstart negotiations.

“He put a lot of pressure on them that it’s time to get to the table,” Tillerson said.

Since taking office, Trump has repeatedly emphasized his intent to succeed where other presidents have failed by striking a final status Israeli-Palestinian accord.

Nauert reiterated this point Wednesday. “The president has made this one of his top priorities, and we are willing to work with both of those entities to try to get them to come together and make some — and to finally bring about Middle East peace,” she said.

Indeed, Trump has already hosted both Netanyahu and Abbas at the White House and has tasked his son-in-law Jared Kushner and former real estate lawyer Jason Greenblatt with charting a course forward.

Greenblatt, Trump’s Special Envoy for International Negotiations, has gone on multiple “listening tours” throughout the region. On these trips, he has listened to multiple stakeholders in the conflict, including other Arab leaders.

During Trump’s first foreign trip last month, which included stops in Saudi Arabia, Israel and the West Bank, he gave a speech at the Israel Museum calling on both sides to put aside the “pain and disagreements of the past” and work toward peace.