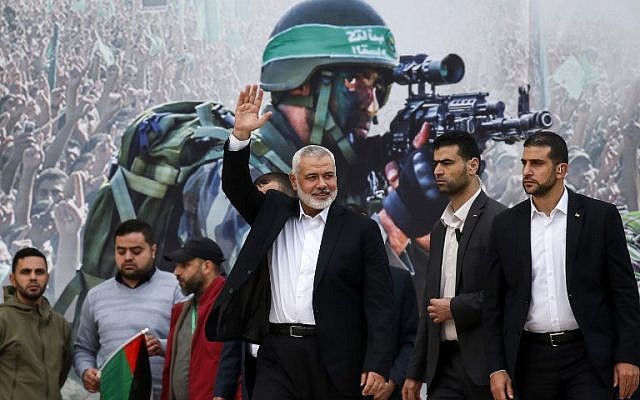 Hamas terror group chief Ismail Haniyeh met Russian Foreign Minister Sergey Lavrov on Monday in Moscow and thanked him for Russia’s critical view of the recently revealed US plan to resolve the Israeli-Palestinian conflict, according to the terror group’s website.

Haniyeh, who left the Gaza Strip in early December, has since traveled to several countries including Qatar, Turkey, Oman, Iran, Egypt, and now Russia.

“The head of the movement expressed our people’s thanks for Russia’s positions that support Palestinian rights in the different regional and international forums,” the Hamas website reported.

Breaking with past American administrations, the US plan envisions the creation of a Palestinian state in about 70 percent of the West Bank, a small handful of neighborhoods in East Jerusalem, most of the Gaza Strip and some areas of southern Israel — if the Palestinians recognize Israel as a Jewish state, disarm Hamas and other terror groups in the Gaza Strip, and fulfill other conditions.

The plan also allows Israel to annex settlements, grants the Jewish state sovereignty over the Jordan Valley and overriding security control west of the Jordan River, and bars Palestinian refugees from settling in Israel. 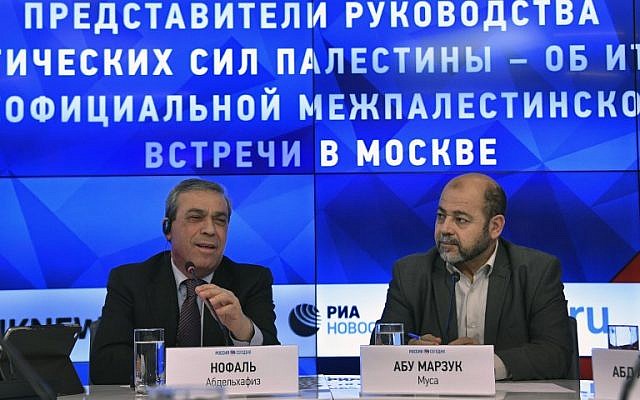 Lavrov also told Haniyeh about “the importance of uniting the Palestinian people and Russia’s readiness to contribute to achieving that goal,” the Hamas report said.

Hamas has been at loggerheads with the Fatah since it ousted the Fatah-dominated Palestinian Authority from Gaza in 2007.

Multiple past attempts to reconcile Hamas and the PA and unite the West Bank and Gaza under one government have failed.

Russia has previously made efforts to advance reconciliation between Hamas and Fatah.

In January 2018, Moscow hosted a number of representatives from the two rival parties and several other Palestinian factions to discuss mending the internal Palestinian rift. In May 2011, Russia also hosted Fatah and Hamas officials to bolster reconciliation efforts.

Lavrov and Haniyeh also discussed what “humanitarian aid Russia could provide to our people in Gaza and in refugee camps,” the Hamas report added.