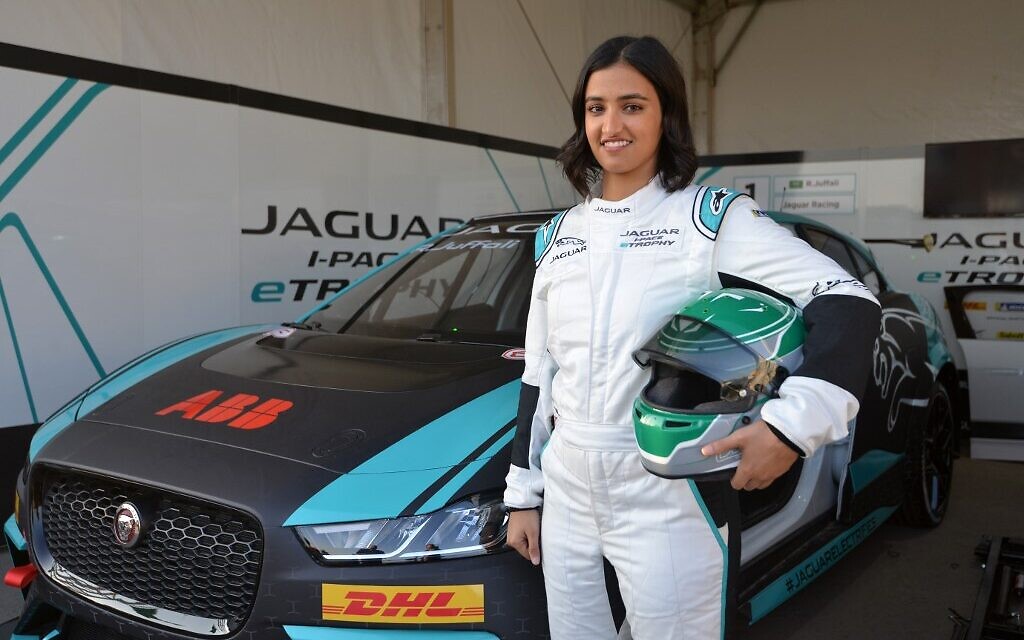 Reema al-Juffali, Saudi Arabia's first female race driver, poses in front of her car during an interview with AFP in Diriyah district in Riyadh on November 20, 2019. (Fayez Nureldine/AFP)

DIRIYAH, Saudi Arabia (AFP) — Sliding behind the wheel of a sleek electric SUV, Reema Juffali is set to blaze a trail in male-dominated motor sports as the first Saudi woman to race in the kingdom.

Such adrenalin rushes were unimaginable for women in the ultra-conservative Islamic kingdom until June last year, when it overturned the world’s only ban on female motorists as part of Crown Prince Mohammed bin Salman’s wide-ranging liberalization drive.

Juffali, a 27-year-old who made her motoring debut just months after the decades-old ban ended, will compete Friday and Saturday in the Jaguar I-PACE eTROPHY, an all-electric race in Diriyah, close to the capital Riyadh.

“The ban was lifted last year and I never expected to race professionally,” said Juffali, sitting in her black-and-green Jaguar I-Pace, an electric sports utility vehicle.

“The fact that I am doing it… is amazing,” Juffali, clad in a racing suit, told AFP in an interview close to the racing circuit in Diriyah. 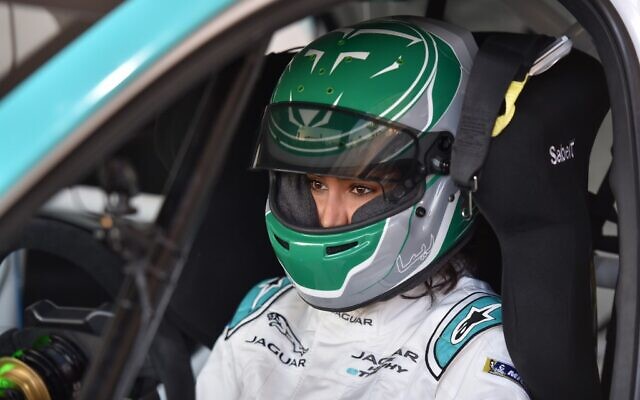 Reema al-Juffali, Saudi Arabia’s first female race driver, is pictured inside her car during an interview with AFP in Diriyah district in Riyadh on November 20, 2019. (Fayez Nureldine/AFP)

Juffali, who hails from the western city of Jeddah and was educated in the United States, will participate as what organizers call a “VIP” guest driver, becoming the first Saudi woman to race on home soil.

Prince Abdulaziz bin Turki al-Faisal, Saudi Arabia’s sports authority chief, has touted it as a “watershed” moment for the kingdom.

“Reema will have thousands cheering her on, as a professional racing driver,” the prince told AFP.

Juffali, who made one of her first appearances in competitive racing at the F4 British Championship at Brands Hatch in April, has only about a year of professional racing experience under her belt.

But she has had a passion for fast cars since her teenage years and grew up watching Formula One.

She passed her driving test after she moved to the United States to study some years ago, and is now one of only a handful of Saudi woman to have obtained a “racing license” in her home country, a mandatory requirement to race professionally. 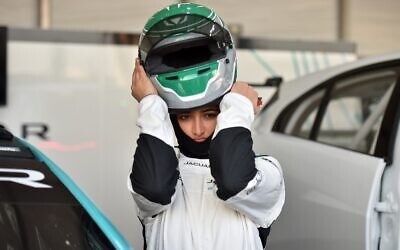 Reema al-Juffali, Saudi Arabia’s first female race driver, adjusts her helmet in front of her car during an interview with AFP in Diriyah district in Riyadh on November 20, 2019. (Fayez Nureldine/AFP)

Even outside the Kingdom, only a few Saudi women have raced professionally.

“For a lot of women who haven’t had the opportunity to learn how to drive, to get behind the wheel is definitely something scary,” explained Juffali.

“For a lot of women in Saudi it’s something so far away.”

Juffali said her dream is to one day race at Le Mans — a 24 hour competition in France that is one of the world’s most prestigious and grueling.

In Riyadh she will be racing against the season’s veterans but will not score any points.

Prince Mohammed has sought to shake off his country’s ultra-conservative image by allowing greater freedoms for women, including easing so-called “guardianship” rules that give men arbitrary authority over female relatives.

But alongside reforms he has also overseen a sweeping crackdown on dissent.

Around a dozen women activists who long campaigned for the right to drive are on trial after being arrested last year, sparking widespread condemnation.

Some allege they were tortured and sexually harassed by interrogators; Saudi authorities deny the allegations.

The driving reform has been transformative for many Saudi women, freeing them from dependence on private chauffeurs or male relatives. 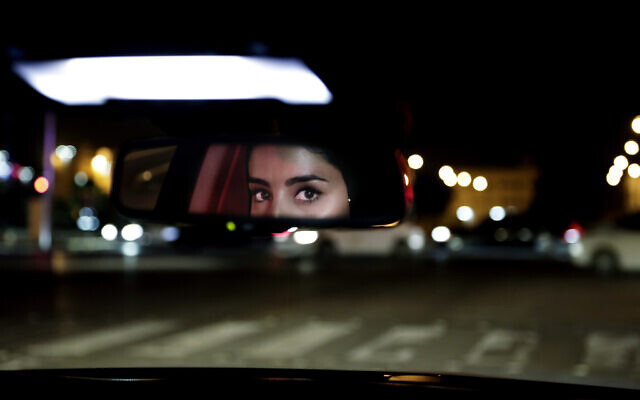 Many are defying the perception that only dainty cars in bright colors are popular with women drivers.

Auto showrooms tapping women clients have rolled out a line-up of cherry red Mini Coopers, but sales professionals say many exhibit an appetite for muscle cars like the Chevrolet Camaro or the Mustang convertible. 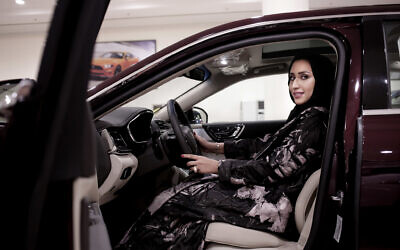 In this illustrative photo from June 21, 2018, car saleswoman Maram Al-Hazer poses for a photograph inside a Lincoln Continental at the Al-Jazirah Ford showroom in Riyadh, Saudi Arabia. (AP Photo/Nariman El-Mofty)

Some women are taking up drifting –- oversteering the car to slip and skid or even spin, and other high-speed daredevilry — which is illegal in public but tolerated in the controlled environment of some theme parks.

Clad in skinny jeans and Harley-Davidson T-shirts, some women are also training to ride motorbikes at a Riyadh driving school, a scene that is still a stunning anomaly in the conservative petro-state.

“Many [people] are surprised by all the changes happening in Saudi,” said Juffali.

“Seeing me in a car, racing… For a lot of people it’s a surprise, but I am happy to surprise people.” 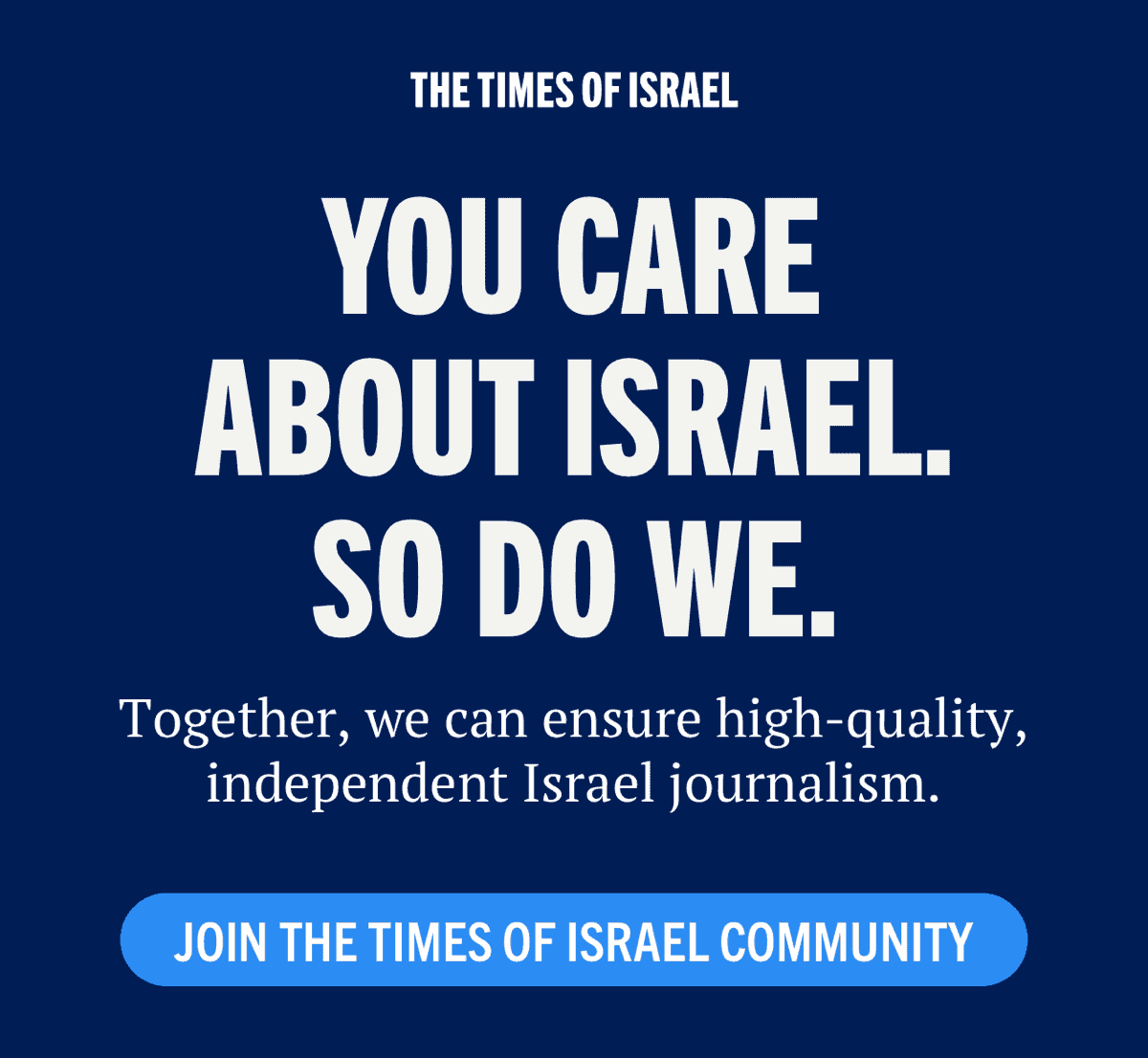