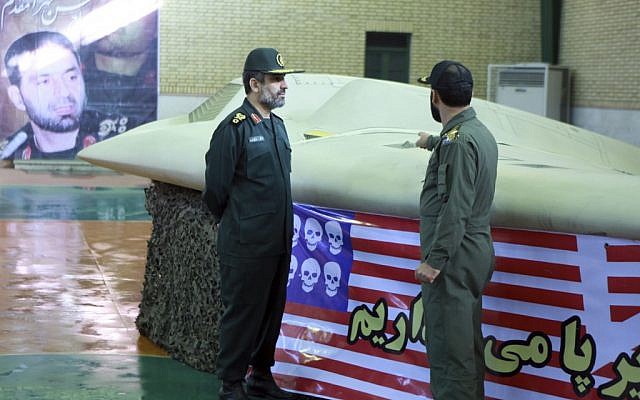 The drone that Israel destroyed over the Negev in early October is not the most advanced that Tehran possesses, Iranian Defense Minister Ahmad Vahidi said on Sunday.

According to a report by Iranian news agency Press TV, Vahidi said that Iran “currently has unmanned aerial vehicles (UAVs) with a technology by far more advanced than [that of] the drone recently flown by the resistance movement of Hezbollah in the Zionist regime’s airspace.”

Vahidi said that the fact that the drone was able to fly over Israeli airspace for half an hour before being shot down disgraced Israel and “shattered the illusion of power of the Israeli regime.”

Also on Sunday, the former deputy commander of the Iranian Revolutionary Guard, Muhammed Mogdam, claimed that the drone was a copy of US technology based on an American “Sentinel” UAV that was shot down by Iran in December 2011.

However, Brig. Gen. (res) Asaf Agmon, the managing director of the Fisher Institute for Air and Space Strategic Studies, said that Iran had been unable to develop any new technology based on the downed Sentinel.

“There is no connection whatsoever between what fell over there and the technology they possess,” he said. “The two are as distant as east and west.”

Agmon, a former pilot and base commander, characterized Iran’s current UAV technology as on par “with the technology that existed during the late 1980s, at best.”

He dismissed out of hand the notion the notion that the UAV that penetrated Israeli airspace on October 6 had, as claimed, been able to send footage back to its senders.

The model shot down over the Yatir Forest, he said. was pre-programmed, meaning that its flight path could not be altered in mid-flight. The only way for it to return images to its senders, he said, “would have been for it to return home.”

“They didn’t get anything out of it. No information,” he said, noting that its flight course was determined in advance by a list of coordinates. Other Israeli officials have also said the drone was too rudimentary to collect any intelligence unavailable on the Internet.

The only type of UAV capable of sending footage back in real time are the models that are connected to a satellite. Agmon said that while Iran had managed to put a satellite into orbit and was admittedly placing great emphasis on satellite technology, its capacity in this realm remains “very primitive.”

Agmon said his information was from research conducted by the Fisher Institute and from sources that he could vouch for “with a full guarantee.” The institute was founded by the Israel Air Force Association and has several former air force commanders on its board of directors.

As for Israel’s performance in shooting down the Hezbollah-launched drone with two missiles, he said that its small size, combined with its small “heat signature and radar signature,” may have been what led the missile to miss its target on the first shot.

Last week, Israeli officials denied claims by Iranian sources that many UAVs made in Iran have flown undetected over Israeli airspace over the past several years.

The commander of the IDF’s northern air defense and control center, Lt. Col. Asaf, told Bamahane magazine last week that “from the first second it entered into Israeli air space we had the ability to shoot it down. It is a matter of making a decision and we have many considerations that in the end determine how and where we down a plane.”

He said, furthermore, that the IDF had increased both the number of active radars in use and the surface to air firepower, “which is always good.”