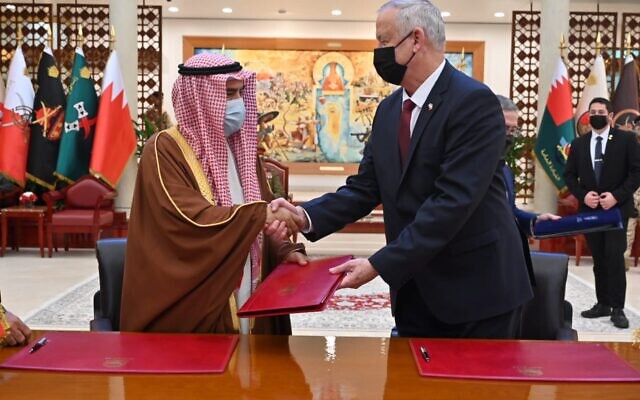 In a briefing to reporters this morning, Defense Minister Benny Gantz says since diplomatic ties were normalized between Israel and the United Arab Emirates and Bahrain two years ago, Israeli defense and military officials have conducted some 150 meetings with their counterparts in the Gulf states.

Gantz adds that more than $3 billion \worth of arms sales to Israel’s new Arab allies were signed during the same period.

According to Defense Ministry figures published earlier this year, the UAE and Bahrain account for 7% of the total arms purchases from Israel in 2021.

The briefing is given ahead of US President Joe Biden’s visit to Israel, the West Bank, and Saudi Arabia next week.

During his July 13-17 visit, Biden is slated to be shown Israeli defense systems, including an in-development high-powered laser interception system, the ministry says.

The ministry has been testing the laser-based defense system for several years, shooting down drones, unguided rockets and anti-tank guided missiles in a series of tests in March.

The Walla news site reports that Jerusalem hopes to partner with Washington on the project, including American investment in further development and deployment of the system.

Other reports suggest Israel intends to ask Biden to approve the delivery of the system to Arab countries aligned against Iran, including Saudi Arabia.

The move would be part of a US-led effort to establish regional cooperation against the threat of Iranian attack drones and missiles.

Gantz has said Israel was building a regional air defense alliance against Iran, and spoke last week of a possible “breakthrough” during Biden’s visit to the region.