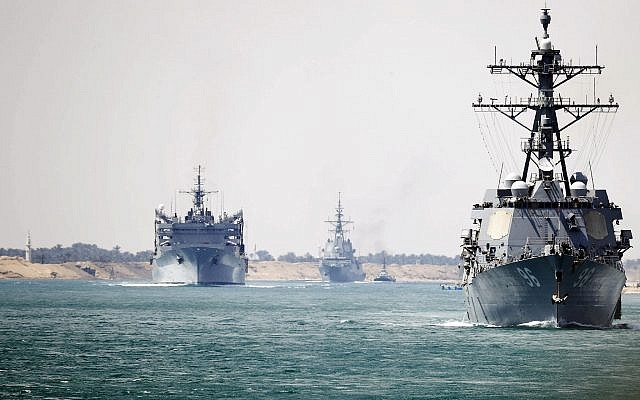 In this photo provided by the US Navy, the Abraham Lincoln Carrier Strike Group transits the Suez Canal, May 9, 2019. (Petty Officer 3rd Class Darion Chanelle Triplett/US Navy via AP)

Two US guided-missile destroyers transited through the Strait of Hormuz without incident on Thursday, the Wall Street Journal reported, amid soaring tensions with Iran in the region.

A US defense official was quoted as saying it was the “quietest transit we have seen in a long time,” an incident that was seen as lessening the likelihood of an armed confrontation between Iran and the US.

Concerns about possible conflict have flared after the US dispatched warships and bombers to the region to counter an alleged but unspecified threat from Iran. There also have been allegations that four oil tankers were sabotaged Sunday off the coast of the United Arab Emirates, and Iran-aligned rebels in Yemen claimed responsibility for an attack on a Saudi Arabian oil pipeline.

Fears have grown out of US President Donald Trump’s decision last year to withdraw from the 2015 nuclear accord between Iran and world powers and impose wide-reaching sanctions — the latest levied as recently as last week — that have crippled Iran’s economy.

Washington already has warned shipping companies that “Iran or its proxies” could be targeting maritime traffic in the Persian Gulf region and said it deployed an aircraft carrier strike group and B-52 bombers there to counter the threat. 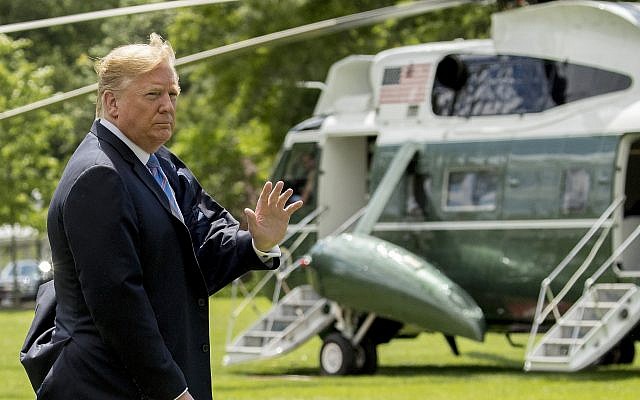 US President Donald Trump waves to members of the media on the South Lawn of the White House in Washington, Tuesday, May 14, 2019, before boarding Marine One (AP Photo/Andrew Harnik)

Last week, US officials said they had detected signs of Iranian preparations for potential attacks on US forces and interests in the Middle East but did not provide any evidence to back up the claims.

The US State Department has ordered all nonessential government staff to leave its embassy and consulate in Iraq. Germany and the Netherlands both suspended their military assistance programs in the country in the latest sign of tensions.

Iraq is home to powerful pro-Iranian militias, while also hosting more than 5,000 US troops. The US military’s Central Command said its troops were on high alert, without elaborating.

European nations have urged the US and Iran to show restraint. Also, a senior British officer in the US-backed coalition fighting the Islamic State group, Maj. Gen. Chris Ghika, said earlier this week that there had been no increased threat from Iranian-backed forces in Iraq and Syria. His comments exposed international skepticism over the US military buildup. 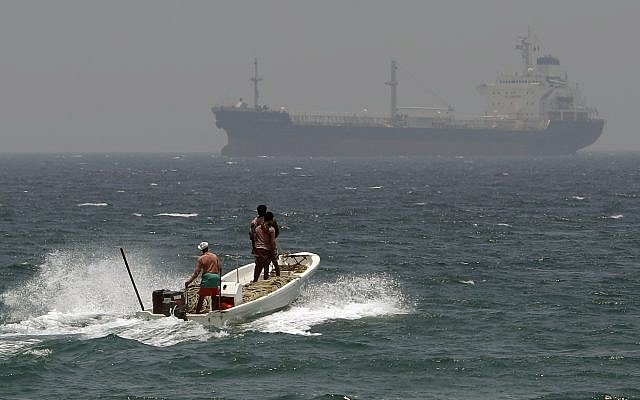 Illustrative: Fishermen in waters off Fujairah, United Arab Emirates, near the Strait of Hormuz, on May 30, 2012. (AP Photo/Kamran Jebreili, File)

Iranian Foreign Minister Mohammad Javad Zarif said during a visit to Tokyo on Friday that Iran has the right to respond to the “unacceptable” US sanctions, but has exercised “maximum restraint.”

Iran recently said it would resume enriching uranium at higher levels if a new nuclear deal is not reached by July 7. That would potentially bring it closer to being able to develop a nuclear weapon, something Iran insists it has never sought.

But Trump took a soft tone Thursday, a day after tweeting that he expected Iran to look for talks. Asked if the US might be on a path to war with the Iranians, the president answered, “I hope not.”