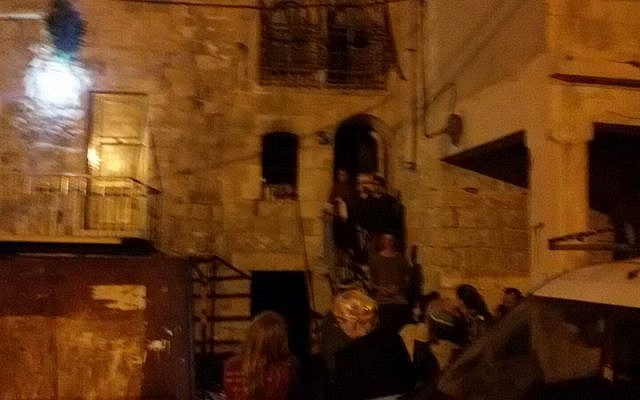 Some 20 families moved into a pair of disputed properties in the flashpoint West Bank city of Hebron on Monday night, claiming to have both legally purchased the buildings and to have received permission from defense officials to enter them.

The move into the buildings, coined by the settlers “the Houses of Rachel and Leah,” was organized by the Harhivi organization, the same group that led the illegal squatting in the disputed Machpela House for eight months before the army evacuated the complex last Thursday.

In that case, too, the Jewish families claimed to have bought the building from its original Palestinian owners, but the High Court of Justice ruled the purchase incomplete, sanctioning their evacuation until the settlers could fully prove the acquisition.

Shlomo Levinger, a spokesman for Harhivi, told The Times of Israel that the Rachel and Leah homes were purchased some five years ago and that his organization received authorization from defense officials in recent days to enter the buildings.

Many of the families who had been squatting in the Machpela House adjacent to the Tomb of the Patriarchs were among those who moved into the Rachel and Leah homes on Monday evening.

Levinger declined to say whether his organization’s decision to peacefully vacate the Machpela House four days ago had anything to do with their knowledge of the alleged Defense Ministry approval of their move into the Rachel and Leah homes.

A similar number of settlers had squatted in the Rachel and Leah homes in January 2016, but were evacuated just one day later after officials in the Civil Administration — the Defense Ministry body that authorizes West Bank property purchases — deemed their acquisition to have been invalid.

The army had since been preventing all entry into the buildings, which are also located near the Tomb of the Patriarchs.

A spokesman for the Civil Administration said that the families had received recently from them the Defense Ministry body what is called a “transaction permit.” They are still in the early stages of the purchase and such a document is not enough to fully prove ownership.

The families of Machpela House had the same document as well and were still eventually forced out of the complex.

The holy site has been a particular source of tension in the city as both its Jewish and Muslim populations revere it as the final resting place of the biblical Abraham, Sarah, Isaac, Rebecca, Jacob, and Leah.

An IDF spokesman said the military was aware of the entry and was working on verifying the settlers’ claims with defense officials.

In a statement hailing the entry, the Harhivi organization said the residents were “blessed to able to continue, in practice, the path of Abraham in the redemption of the Land of Israel.”

“In the face of all the challenges and those who are trying to derail our continued expansion in the city of our forefathers, we declare that on this day, all of Israel is taking a historic step in redeeming the land,” the settler organization added. 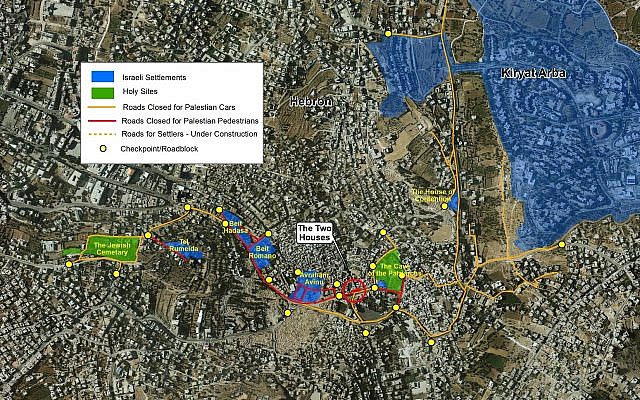 A map of some of Hebron’s disputed homes. (Courtesy: Peace Now)

The Peace Now settlement watchdog blasted the settlers’ entry into the Rachel and Leah homes as “unparalleled chutzpah.”

The left-wing NGO claimed that the residents were still in the initial stages of the purchase and had no proof of ownership. The group called on security forces to evacuate the buildings and not wait for the High Court to hand down a ruling on the matter, which could take months.

Several hundred Israeli settlers live in Hebron, amid tens of thousands of Palestinians. In October, the Defense Ministry approved permits to expand the settler enclave with more than 31 new homes, the first approved building in 15 years.