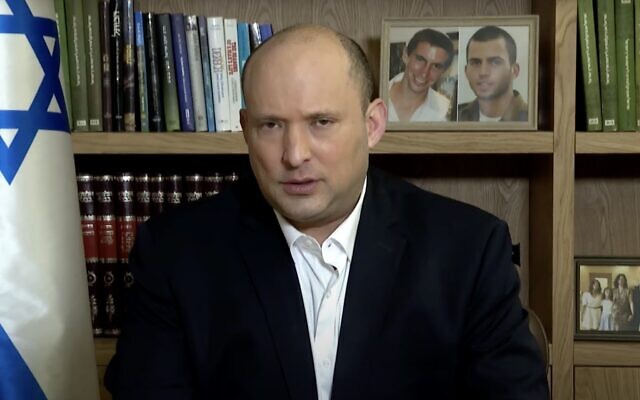 Prime Minister Naftali Bennett calls on Israeli gun owners to arm themselves in public as he details various measures being taken in the wake of three deadly terror attacks over the past week.

“We are experiencing a murderous terror wave and as in all previous waves, this time we will also overcome,” he says in a video statement filmed at home, where he is in quarantine after testing positive for COVID-19.

Bennett says the security services are ramping up intelligence operations to catch potential assailants and notes the deployment of reinforcements.

The premier says the government has agreed to form a new “Border Police Brigade,” which he says was inspired by the violence in mixed Jewish-Arab cities during last May’s Gaza war. He doesn’t give further details.

He also says law enforcement is continuing to crack down on illegal arms in the Arab community and says the government is looking at ways to incorporate volunteers, “citizens who want to assist.”

“What is expected of you, Israeli citizens? Vigilance and responsibility,” he says. “Whoever has a gun license, this is the time to carry a gun.”

Bennett hails the “heroism” of police officer Amir Khoury, who was killed while responding to yesterday’s shooting attack in Bnei Brak, and other members of the security services.