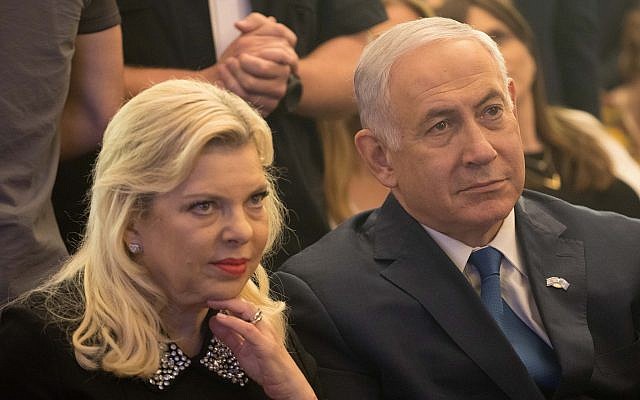 Prime Minister Benjamin Netanyahu, right, and his wife Sara in Jerusalem, on May 16, 2018. (Yonatan Sindel/Flash90)

Police investigators questioned Prime Minister Benjamin Netanyahu for some five hours on Friday in a series of burgeoning corruption investigations.

Netanyahu was questioned at his official residence in an interview that, according to assessments, was likely to touch on recordings and information provided by his former adviser Nir Hefetz, who has been recruited as a state witness.

It was the 12th time the prime minister has been interrogated.

After the interrogation, his office put out a statement saying he had cooperated and calling the investigations unfounded.

“Now, after the 12th interrogation, it’s entirely clear that the investigations of the prime minister are not only meatless — they’re boneless,” the statement said. “[As in previous sessions] this time, too, the prime minister responded to all of the questions he was asked with full confidence, fully aware that nothing happened and therefore nothing will happen.”

According to media reports, the questioning focused on two separate graft cases — known as cases 1000 and 2000 — in which the prime minister is suspected of receiving illicit gifts and engaging in illegal quid pro quos.

It wasn’t immediately clear if police also asked Netanyahu about a third affair known as Case 4000, in which he is suspected of trading favors for favorable media coverage.

In Case 1000, the so-called “gifts scandal,” Netanyahu is suspected of “systematically” demanding benefits worth about NIS 1 million ($282,000) from billionaire benefactors, including Arnon Milchan and Australian resort owner James Packer, in exchange for favors.

In Case 4000 Netanyahu is suspected of advanced regulatory decisions as communications minister and prime minister that benefited Shaul Elovitch, the controlling shareholder in Bezeq, the country’s largest telecommunications firm, despite opposition from the Communication Ministry’s career officials, in exchange for positive coverage from Elovitch’s Walla news site.

Netanyahu’s wife Sara and son Yair are also suspects in that case.

Netanyahu has vehemently denied wrongdoing in all of the cases, insisting the gifts were given by friends and were not bribes, and that he never intended to act on his conversations with Mozes.

The prime minister has also insisted that all his regulatory decisions affecting Bezeq were in keeping with the recommendations of the Communications Ministry’s professional echelons.

Netanyahu was last questioned in August in a four-hour interrogation that focused on Case 4000, amid media reports that police were leaning toward recommending a bribery indictment against him in the case.

Police have already recommended that Netanyahu be indicted for bribery in cases 1000 and 2000.

Attorney General Avichai Mandelblit, who will make the final decision whether to indict the prime minister, reportedly intends to examine all three cases at the same time — which will be possible only after he receives the state attorney’s recommendations based on the final police reports.

That process puts the likely date of any final word on whether a trial may be in Netanyahu’s future in late 2019, possibly after the next Knesset elections. Those elections are currently slated for November 2019, but may be held earlier.

Raoul Wootliff contributed to this report.