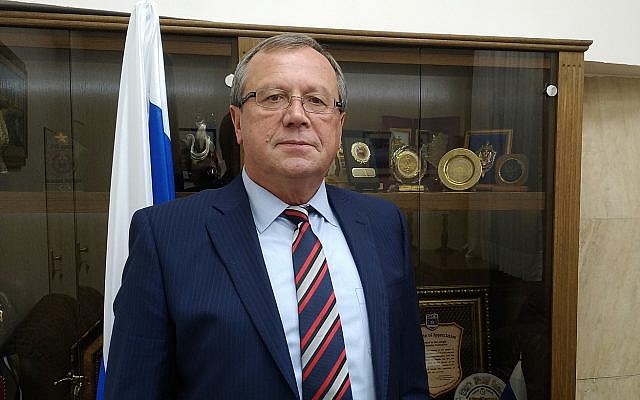 Speaking to The Times of Israel Friday, Russian Ambassador to Israel Anatoly Viktorov expressed “hope” that Israel “will continue [taking] a wise diplomatic approach” on Moscow’s invasion of Ukraine, as his country summoned Israel’s envoy to receive clarifications on the Israeli position.

While Israel has expressed concern regarding the invasion and offered humanitarian aid to the Ukrainian people, Prime Minister Naftali Bennett has avoided condemning Russia or even mentioning the country by name in his statements since the launching of the widespread military operation across Russia’s border.

But Foreign Minister Yair Lapid explicitly condemned Moscow on Thursday, saying its invasion was “a grave violation of the international order.”

Israel is one of the few countries that maintains warm relations with both Ukraine, a fellow Western democracy, as well as Russia, which controls the airspace over Syria. Jerusalem has relied on Moscow’s tacit approval for use of that airspace to carry out airstrikes against Iranian proxies just beyond its northern border.

Israel’s stance has upset Ukraine, whose leaders have expressed understanding with the delicate position Jerusalem finds itself in while admitting that it was hoping for more support and solidarity during Kyiv’s time of need.

On Friday a top Russian diplomat summoned Israel’s ambassador to the country to ask for clarifications in the wake of Lapid’s comments. According to several reports in Hebrew media, Alexander Ben Zvi was asked why Israel was “backing Nazis.” 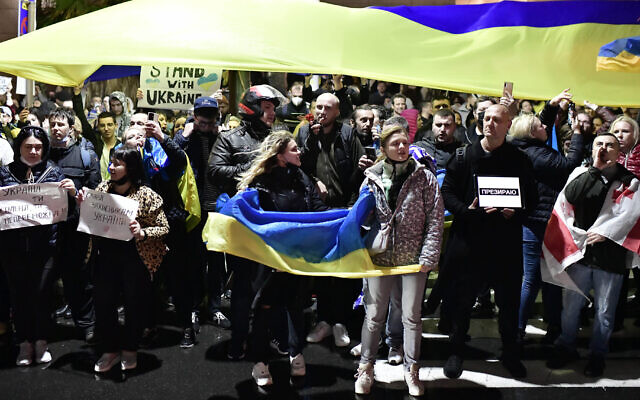 Demonstrators carry placards and flags during a protest outside the Russian Embassy in Tel Aviv, Feb. 24, 2022. (Tomer Neuberg/Flash90)

Viktorov told The Times of Israel: “We took note of Israel’s position. Our Israeli colleagues have repeatedly spoken about their concern for the safety of their citizens and the Jewish community in Ukraine.

“At the same time, we hope that they will stay wise and diplomatic and continue our joint work for the benefits of our countries and peoples,” he added, cautioning Israel against joining “a new kind of sport” of Russia bashing.

Russia has branded as “neo-Nazis” Ukraine’s political leadership, including its Jewish president Volodymyr Zelensky. Many historians have described the use of the Holocaust in Moscow’s PR campaign as disinformation and a cynical ploy to further the Russian leader’s aims. 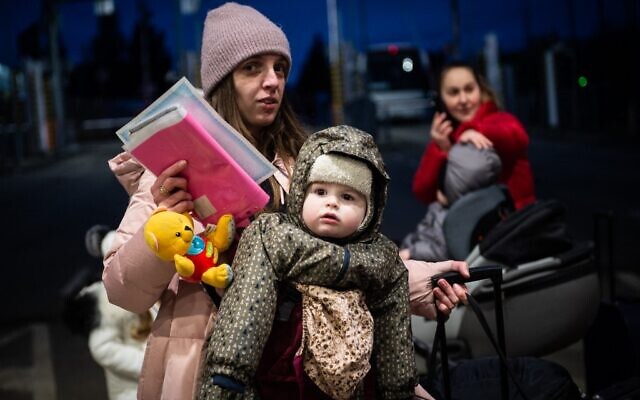 Ukrainian women and children are seen at the Slovak-Ukrainian border crossing at Vysne Nemecke on February 25, 2022, following Russia’s invasion of the Ukraine (PETER LAZAR / AFP)

Kan news reported Friday that in a phone call, the Ukrainian president asked Bennett for Israel to serve as a mediator between Russia and Ukraine.

“We want the negotiations to take place in Jerusalem,” Kan quoted Zelensky as telling the prime minister, expressing hope that he could help negotiate a ceasefire. “We think that Israel is the country that could hold such negotiations in the middle of the war.”

The Kan report, relying on sources familiar with the call, did not say what Bennett’s response was, and the Prime Minister’s Office declined to comment.

Viktorov told The Times of Israel that Russia has handed over “a number of materials” to Israel that explain Moscow’s reasoning behind the invasion. 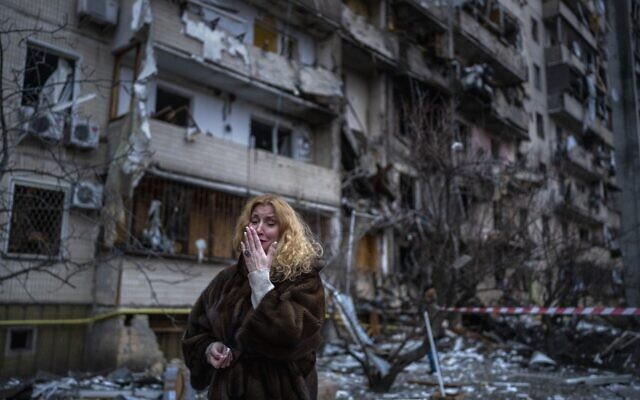 Natali Sevriukova reacts next to her house following a rocket attack on the city of Kyiv, Ukraine, Friday, Feb. 25, 2022. (AP Photo/Emilio Morenatti)

He avoided saying whether Israel risked losing the green-light it has been given by Russia to use Moscow-controlled airspace over Syria to strike Iran proxies operating to the north of its border.

The envoy also dismissed the claim that Russian calls to respect Syrian sovereignty were hypocritical as it is in the midst of a large scare invasion of Ukraine.

“One of the main goals of the current operation is the restoration of the sovereignty of this country as for many years now it has been actually managed externally and the Kyiv regime consistently pursued a policy of de-sovereignization of the country,” Viktorov said.