Thousands of demonstrators took to the streets across Israel on Saturday evening, in protests largely focused on demanding Prime Minister Benjamin Netanyahu resign over his indictment on graft charges and castigating his government’s handling of the coronavirus pandemic.

In Jerusalem, demonstrators filled Paris Square and the street outside the Prime Minister’s Residence, where there have been growing protests in recent weeks. A police spokesman said around 5,000 people were at the protest which began at around 8 p.m. and continued for some five hours, long past its official 11 p.m. ending. (Channel 13 put the Jerusalem turnout at 10,000, and said it was the largest demonstration of its kind to date.)

The demonstrations also took place in Tel Aviv, Caesarea and at major junctions, highway overpasses and other spots across the country, in what appeared to be the largest yet demonstration of a growing protest movement seeking Netanyahu’s ouster and redress of a laundry list of other ills wracking the country.

In Jerusalem’s Paris Square, which has been the locus of the protest movement, police allowed protesters to remain until around 1 a.m. but then began clearing them out, dragging activists off the street one by one and eventually deploying two water cannons against the remaining group that refused to leave.

Police said 12 people had been detained or arrested for “various offenses included disturbing public order or attacking other protesters.” 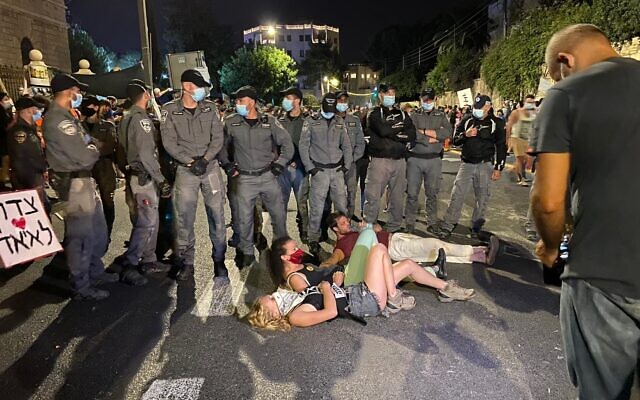 Protesters lie down in front of riot police on Ben Maimon Street outside the Prime Minister’s Residence in Jerusalem in the early hours of Sunday, July 26, 2020. (Anat Peled/Times of Israel)

The police, who have been criticized for what some say are heavy handed tactics deployed against protesters during previous rallies, waited until later in the night than normal to use force to clear out the area. This came after police sources told Channel 12 news that they had no intention of using more forceful tactics against demonstrators, despite the reported pressure of Public Security Minister Amir Ohana.

No major fighting between protesters and cops was reported.

“The police will act to allow everyone the freedom of expression and protest, but together with that, will not allow public order to be disturbed,” a police spokesperson said in a statement.

Protesters came under attack by others, including at the Sha’ar Hanegev interchange in southern Israel, where a group of people reportedly kicked and punched demonstrators, and one person suffered light wounds to his neck.

At a different junction, a man protesting with his son and several others filed a complaint with police saying a driver slowed down his car at the Aluf Sade junction in Ramat Gan and pepper-sprayed them, Haaretz reported.

In Jerusalem, police said a man was caught with pepper spray and a flare on a street near the protest after reports of an attack there.

An anti-corruption protest was also held for the first time near Netanyahu’s private home in the northern coastal town of Caesarea, where hundreds of people were gathered.

Additionally, hundreds of people demonstrated in Tel Aviv’s Charles Clore Park against the government’s policies to address the economic fallout caused by the COVID-19 outbreak. 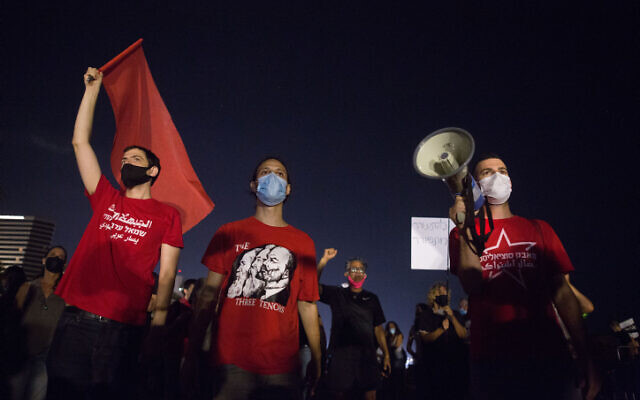 In Jerusalem, with the square and street filled, protesters spilled into the surrounding streets as more continued to join the crowd, which was far more tightly packed and took up far more space than at any previous protest.

“They stole from the poor to give to the rich, what a corrupt government!” protesters chanted, as the crowd’s noise rose to a deafening roar.

Gidi Carmon, 23, came from the central city of Modiin to attend the anti-Netanyahu protests in Jerusalem for the first time. A student at Ben-Gurion University in Beersheba, he lost a part-time job at the beginning of the pandemic which he used to make ends meet. 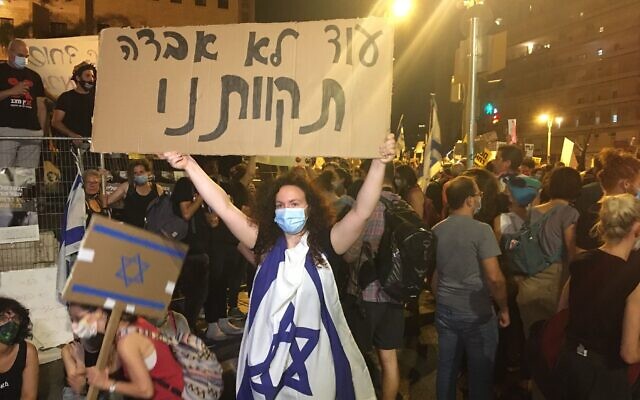 Israelis protest against Prime Minister Benjamin Netanyahu outside his official residence in Jerusalem on July 25, 2020. (Aaron Boxerman/Times of Israel)

“The people at the top are dealing with crazy things instead of the economy and with people’s health, like tax breaks for Netanyahu. It’s time for him to resign,” Carmon, who identified himself as center-left, told The Times of Israel.

“Take annexation — it’s not even about right or wrong, it’s about timing. How did they spend so much time on that in the middle of this crisis?” Carmon asked rhetorically, referring to Israel’s declared intent to annex parts of the West Bank.

“We have a prime minister who’s interested in advancing his personal affairs and can’t lead the country,” she said. “If Bibi [Netanyahu] doesn’t go, one day we won’t be a democracy.” 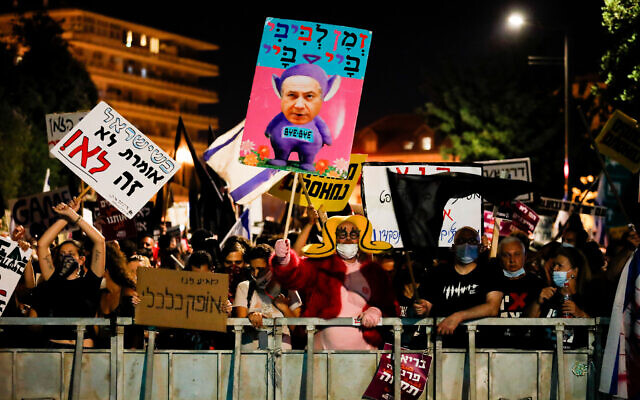 While other protests around the country ended by an 11 p.m. deadline given by the police, in Jerusalem, most showed little inclination to leave by the stipulated time and thousands remained as the clock struck midnight, appearing to test the police.

Among the hundreds of officers on the scene was Jerusalem police chief Doron Yedid, who was jeered by protesters, who taunted him with chants of “Won’t be police commissioner,” referring to the yet-unfilled top national cop position.

While police did not up tactics against demonstrators, they made their own show of force by parking a row of large armored vehicles to block off roads near the Prime Minister’s Residence. The use of the heavy trucks, usually used in confrontations with Palestinians, appeared to be a first since the protest movement kicked off earlier this month.

Much of the criticism of police tactics has focused on the use of truck-mounted water cannons, which spray a a high-intensity blast of water at protesters and had previously been mostly used against ultra-Orthodox or Palestinian demonstrators.

Organizers have vowed to file complaints with the police for injuries sustained by demonstrators in recent days at the hands of the police, including from water cannon fire. They are also planning to file civil suits for damages over those injuries, Channel 12 reported on Saturday. 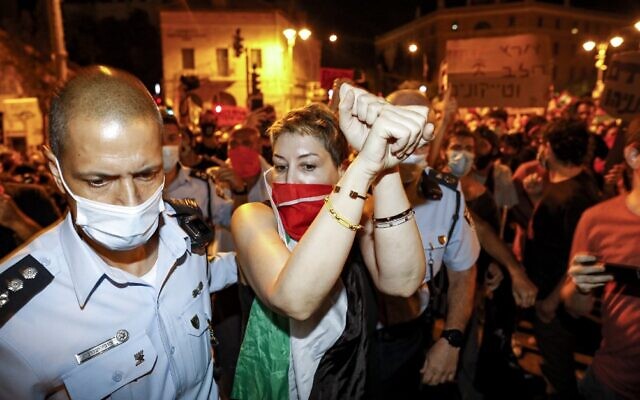 Policemen escort away a woman wearing a Palestinian flag as a bandana during a demonstration against Prime Minister Benjamin Netanyahu outside his official residence in Jerusalem on July 25, 2020. (Ahmad Gharabli/AFP)

The protests have coalesced around the so-called Black Flag movement seeking Netanyahu’s resignation over charges against him in three criminal cases, but have also expanded to include those demonstrating against the government’s handling of the coronavirus pandemic and attendant economic crisis, Israel’s treatment of Palestinians and military occupation of the West Bank, police abuse and other issues.

At least one woman wearing a Palestinian flag was seen being led away from the protest by police.

The protests, which appear to skew young, appears to be the largest mass movement since 2011’s cost-of-living protests, which sent hundreds of thousands to the streets and into protest tents lining roads in nearly every major city.

Netanyahu, who has vowed to remain in office and has described the protesters as “anarchists,” lashed out Saturday at Israel’s leading news broadcaster for covering the growing demonstrations against him, accusing it of working “to fuel” the protests. 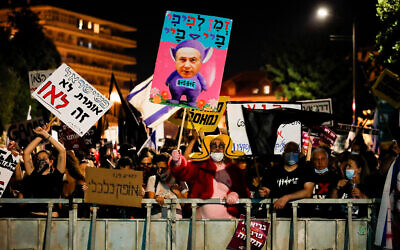 “Channel 12 has turned into an unashamed propaganda arm of the anarchist left to topple the right-wing government and its leader,” he said in a statement, apparently referring to the “national emergency unity government” he formed with the centrist Blue and White party.

“Every evening they open their propaganda broadcasts with ‘dramatic’ live reports about inflated numbers of protesters and portray this as if there are tens of thousands or hundreds of thousands,” he continued, without giving evidence.

“[Channel] 12 news is making a Herculean effort to fuel the political protests that are organized and funded by left-wing organizations. Fake news on steroids,” he accused

He claimed that almost all of the network’s programming “has been mobilized for unrestrained Bolshevik propaganda against the prime minister” and accused the channel of ignoring what he has said are growing threats against him and his family.