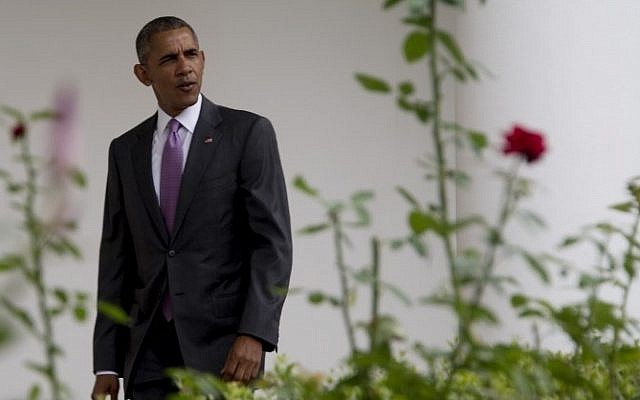 US President Barack Obama walks from the residence to the Oval Office at the White House in Washington, DC, July 27, 2016. (AFP/Jim Watson)

The announcement came one day after the Senate voted unanimously by a vote of 99-0 renew the Iran Sanctions Act — which was first passed by Congress in 1996 — and two weeks after the House overwhelmingly approved it 419-1.

“We believe the Iran Sanctions Act extension is not necessary, but we also believe it won’t interfere with the Iran deal,” White House spokesman Eric Schultz said during a press briefing. “I would expect the president to sign this piece of legislation.”

The bill would grant a 10-year extension of the existing law. Obama administration officials have previously said they believed its enactment would not contravene the landmark nuclear accord reached in July 2015, which provided Tehran relief from crippling oil and financial sanctions in exchange for rolling back its nuclear program.

Proponents of renewing the law, which is set to expire at the end of 2016, view it as a critical instrument for holding the Iranian regime accountable against any violations of the deal or nefarious activities in the region.

The White House had earlier said it would reject any measure from Congress that would undermine the Iran deal.

The announcement also comes as news spread that President-elect Donald Trump intends to impose new sanctions on Iran pertaining to its ballistic missile program and record of human rights violations, according to a report Friday in the Financial Times.

Trump’s transition team is apparently consulting with Republican lawmakers on possible restrictions that would not violate the terms of the nuclear agreement.

During the campaign, Trump repeatedly promised to dismantle the Iran deal, while vowing at other times to maintain a policy of strict enforcement.

Since winning the election, his top aides have indicated he will not seek to scrap the deal upon taking office, despite some of his appointees — such as Kansas Rep. Mike Pompeo, his choice head the CIA — saying otherwise.

Shortly after his nomination was announced, Pompeo tweeted: “I look forward to rolling back this disastrous deal with the world’s largest state sponsor of terrorism.”