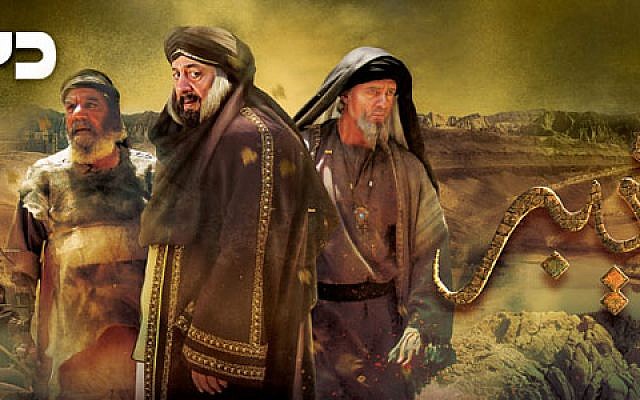 A promotional poster for 'Khaiber,' an anti-Semitic miniseries scheduled to be broadcast on Arab channels over the course of the Ramadan (screen capture: Dubai TV)

JTA — An anti-Semitic television series is being broadcast throughout the Arab world for the Muslim holy month of Ramadan.

“Khaiber,” which is being shown on the satellite network Dubai TV, the Algerian 3 station and Dream TV, dramatizes the battle between Muslims and the Jews of the town of Khaiber in Arabia and depicts Jews as the enemy of Islam.

Traditional Islam believes the battle ended with the execution of thousands of Jews.

Episodes aired to date have revealed classic anti-Semitic motifs, including a Jewish conspiracy to undermine Arabs, as well as depicting Jews as cheap, greedy and immoral, according to the Anti-Defamation League.

“With Syria, Egypt and other countries in the Middle East going through historical upheavals, it is absurd and outrageous that the entertainment of the Ramadan season promotes the Muslim subjugation of caricatured Jews,” Abraham Foxman, ADL’s national director, said in a statement.

“The uprisings in the Arab and Muslim world have revealed a hunger among much of the Middle East for democracy, accountability and the development of effective civil and pluralistic society. ‘Khaiber’ and other productions of its ilk represent the old detrimental approach of promoting Muslim societal unity through focusing hatred on Jews and Israel.”

Other anti-Semitic miniseries have aired in the Arab world during previous Ramadans.