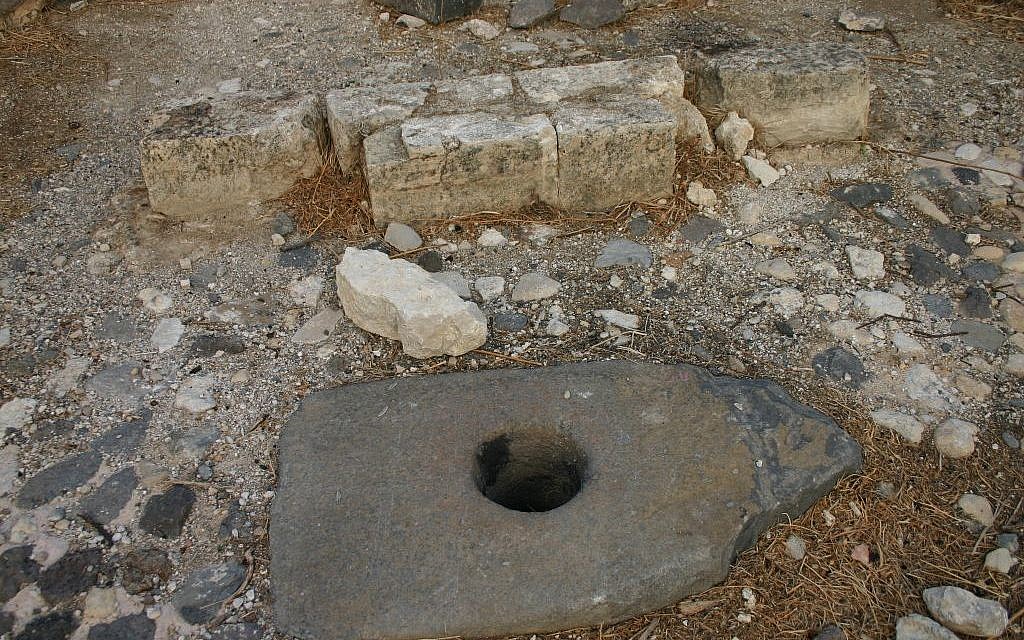 Ancient Tiberias was built by the Roman ruler Antipas in the year 20 C.E. Located between the Sea of Galilee (Kinneret) and a mountain that would later be called Bereniki (probably for Herod’s granddaughter Berenice), Tiberias contained a magnificent palace which contemporary scholars believed to have been located at the peak of the mountain. It was a perfectly logical assumption, since from the heights of Bereniki there would be a heart-stopping view of then-new Tiberias and the glistening waters below.

But when members of an archeological team from the Israel Antiquities Authority stuck their picks into the mountain, they were astounded to find not a palace but a church –the first and only eighth-century church to be discovered in Israel.

Beneath this well-preserved site they also dug up foundations and a mosaic floor from a church built 200 years earlier but destroyed in the region’s catastrophic earthquake of 749.

In Bereniki the archeologists made other unique discoveries as well. Not only was the eighth-century church abandoned in an orderly fashion, leaving an altar, pillars, and other parts of the edifice almost completely intact, but within the foundations of the earlier church they found what some experts believe is a stone sacred to the Christian faith. 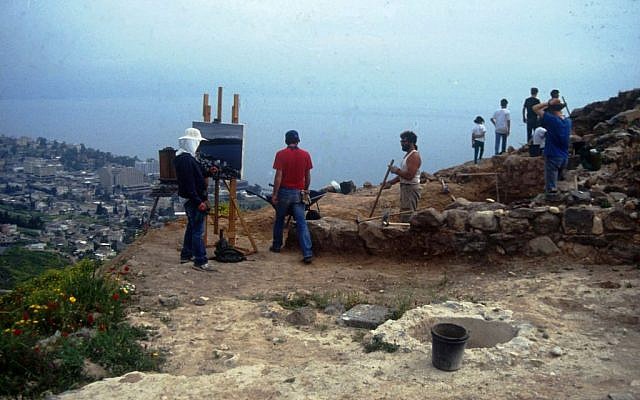 To visit Bereniki, take Highway 90 to Tiberias and you will see a sign for Bereniki just south of the downtown area. Park your car near the excavations, then climb the western hill (the one next to the road). At the top enjoy a superb view of both Lake Kinneret and modern Tiberias, then look around for an ancient olive press nearby. The gigantic rolling stone you see was used for pressing the oil out of the olives, which drained into the basin.

Archeologists have concluded that during the sixth century there were olive trees on Mount Bereniki and that monks tending the church made at least part of their livelihood by producing olive oil. The late Dr. Yizhar Hirschfeld, who directed the excavations, found rooms from a monastery next to the church.

As you walk towards the eastern hill and the church, look below you and behind you. Black basalt stones are part of a wall two-and-a-half meters thick and at least eight meters high that was constructed by Byzantine Emperor Justinian in the sixth century.

Any remains you see here, on the western hill, are from the sixth century; eighth-century laborers used the eastern hill, the site of Bereniki’s major excavations. 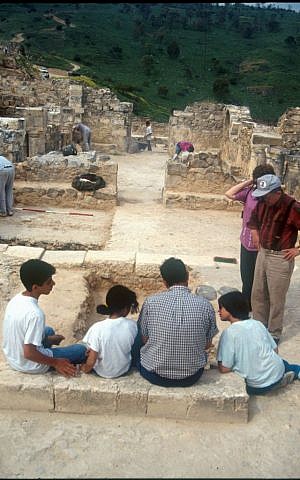 When an earthquake devastated Tiberias and Beit She’an in the mid-eighth century, the original eighth-century church toppled to the ground. But unlike nearby Beit She’an, which lay in ruins for millennia until uncovered in recent archeological digs, this site was rebuilt and enlarged soon after the earthquake and was probably in continuous use until the end of the 12th century.

During the Moslem domination of the country that began in the seventh century, Tiberias became an administrative center and, at one point, the official capital of the Galilee. Note the size of the church that the Christians were allowed to build on the eastern hill. The structure measured 52 meters from east to west and 26 meters north to south and completely covered the hilltop. Bereniki’s eastern hill was apparently the only purely Christian part of Tiberias in Byzantine and Moslem times.

Dr. Hirschfeld once told us that since Christian residents were only a small minority in Tiberias, a church of these dimensions would not have been built to service the local Christian population. Instead, it may have been a pilgrimage site: Christians could have flocked here during visits to Bethlehem, Jerusalem, and Jericho as they followed in the footsteps of Jesus.

Look for the open courtyard, or atrium, common to churches of that period, and a large cistern with plaster still sticking to its walls. Beyond the atrium is the southern entrance to the church and to its left (your right) stand remains of a tower. This was apparently added in the ninth century and in all likelihood contained a church bell. Remains of the church’s mosaic floor are beautifully designed with blue and white circles, and bordered by mosaic leaves and branches.

The church was a magnificent structure built in basilica style with two rows of columns and three apses. All the columns still standing with their bases and capitals in place were preserved intact and have not been reconstructed. The same is true of the arch.
If you are more familiar with the Roman style of pillars found in Beit She’an, Caesarea, and elsewhere in the country, the columns’ design may seem strange. Remember, though, that the architects here were influenced by Moslem culture and not by Greek or Roman concepts. 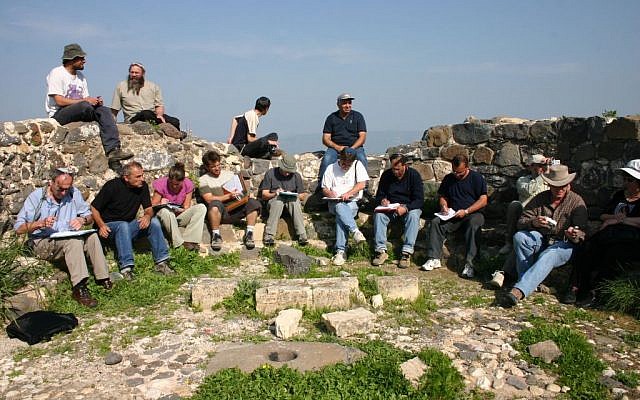 Out on the Mount (photo credit: Shmuel Bar-Am)

The main apse contains part of the altar and a strange rock with a perfectly carved hole in the middle. In churches of this period, sacred objects were commonly placed in recesses under the altar, and the archeologists were startled when they unearthed this peculiar rock.

When discovered, the rock was covered by a marble plaque that had a hole in the center. Excavators continued looking for the relics they were certain could be found underneath the plaque and the stone; eventually they were forced to conclude that the rock itself was the sacred relic.

Today the same experts conjecture that at one time the rock stood vertically at the edge of the Kinneret, and was probably used for mooring boats. They think that early Christians must have made a connection between this particular mooring stone and St. Peter, or perhaps Jesus, and carried it up the mountain for worshipers to touch.

When a pilgrim visited Bereniki he may have soaked a piece of cotton with oil, thrust it through the hole in the plaque, and touched the stone. He would then have pulled it out and squeezed the now holy oil into ampules that could be carried home. 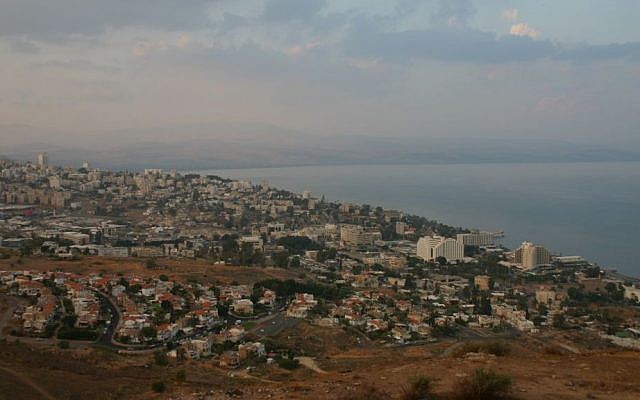 The view from Mount Bereniki of Tiberias and the Sea of Galilee (photo credit: Shmuel Bar-Am)

Before you descend Mount Bereniki, gaze down at Lake Kinneret. Tiny by American standards – even in a good year it is only 21 kilometers long and 12 kilometers wide – the lake gleams in the sunlight and shimmers eerily as the sun goes down. In spite of its small size the lake has been providing fishermen and traders with a constant livelihood for thousands of years.

CAUTION: Don’t stand too near the edge of the mountain!

This article is adapted from EasyWalks in Israel by Aviva Bar-Am.

Aviva Bar-Am is the author of seven English-language guides to Israel.
Shmuel Bar-Am is a licensed tour guide who provides private, customized tours in Israel for individuals, families and small groups.