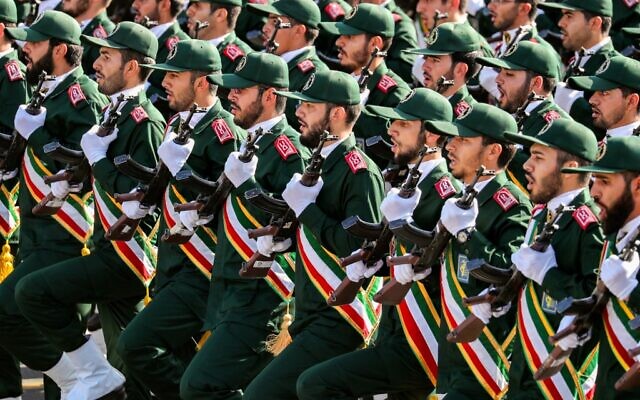 This photo taken on September 22, 2018, shows members of Iran's Revolutionary Guards Corps (IRGC) marching during the annual military parade that marks the anniversary of the outbreak of the devastating 1980-1988 war with Saddam Hussein's Iraq, in the capital Tehran. (Stringer/AFP)

Iran reported the death of another colonel of the elite Quds Force of its Revolutionary Guards on Friday, the second in two weeks from the unit which oversees Iran’s military operations abroad.

Quoting an unknown official, the early morning report by the official IRNA news agency said Col. Ali Esmailzadeh died during an “incident in his residence” days ago in city of Karaj, some 35 kilometers (19 miles) northwest of the capital Tehran.

It did not elaborate but denied reports that the colonel was assassinated.

Other news channels close to the Guard said Esmailzadeh fell from his rooftop or balcony.

In May two unidentified gunmen on a motorbike shot Col. Hassan Sayyad Khodaei five times in a car in front of his residence in Tehran. Iran blamed his slaying on Israel. Iran often blames Israel for such targeted killings, including those on nuclear scientists over the past years.

Iran International claimed that Esmailzadeh was killed over suspicions he provided information to Iran’s enemies that was used in Khodaei’s assassination.

The report said he was close to Khodaei, who was gunned down in Tehran on May 22. Both he and Esmailzadeh were members of the IRGC’s so-called Unit 840, a shadowy division within the IRGC’s expeditionary Quds Force that carries out kidnappings and assassinations outside of Iran.

The report said that after Khodaei’s killing, the IRGC began hunting for security leaks and became suspicious of Esmailzadeh. He was then thrown from his roof, but the IRGC told his family he died by suicide because he was distraught over his separation from his wife, Iran International said, citing “sources in Iran.”

The Persian-language outlet is identified with Iran’s political opposition. It was launched in 2017, is based in London and reaches millions of Iranians in Iran and around the world. It is reportedly funded by Saudi Arabia, Iran’s regional foe.

Khodaei was shot five times in his car by two unidentified gunmen on motorbikes in the middle of Tehran. He reportedly was involved in killings and abductions outside of Iran, including attempts to target Israelis. 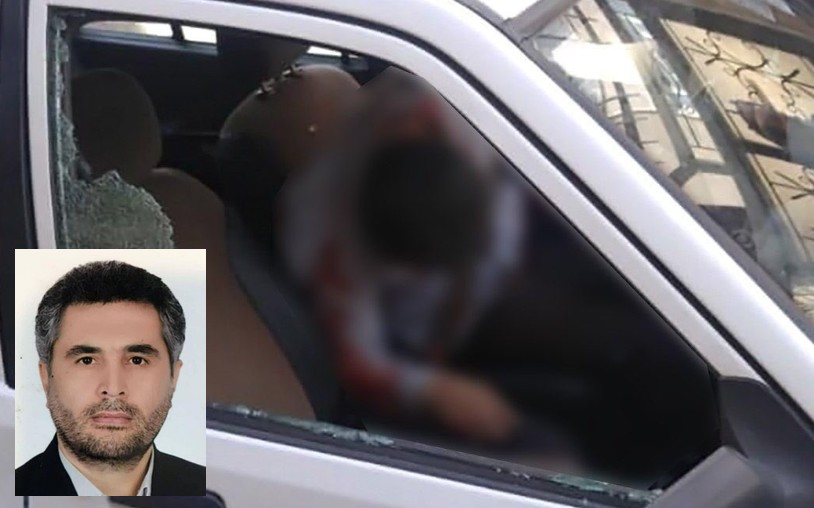 The body of a senior member of Iran’s Revolutionary Guard identified as Col. Hassan Sayad Khodaei, who was assassinated in Tehran on May 22, 2022. Inset: Khodaei (Twitter/screenshot)

Iranian authorities have yet to pin down the suspects in Khodaei’s killing, even though the incident took place in the heart of one of the most secure areas in Tehran — Mohahedin-e Eslam Street, home to other senior officials in the IRGC and its elite Quds Force.

The head of the IRGC blamed “the Zionists” for the assassination and vowed revenge.

Israel, which has not officially commented on the incident, reportedly raised the security alert level at its embassies and consulates around the world, fearing a retaliatory Iranian attack.

An unnamed intelligence official told the New York Times that Israel told US officials it was behind the assassination. A senior Israeli MK denied this.

Israel has issued travel warnings for Turkey due to fears of an Iranian response to the assassination. In an unusual move, the National Security Council explicitly identified “Iranian terrorist operatives” as being the source of the threat to Israelis in Turkey and nearby countries.

Khodaei’s assassination was the most high-profile killing inside Iran since the November 2020 killing of top nuclear scientist Mohsen Fakhrizadeh.