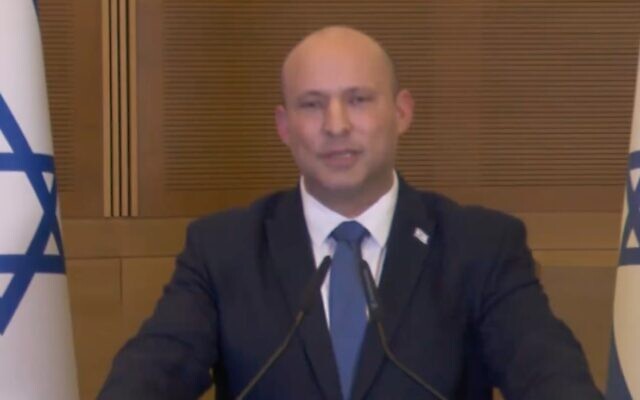 Prime Minister Naftali Bennett addresses the public on June 29, 2022, announcing he will not compete in the coming elections. (Screen capture/Channel 12)

In a brief address from a Knesset meeting room, outgoing Prime Minister Naftali Bennett announces that he will not compete in the next elections, but hints he’ll hope to come back later, saying that his “calling” is to serve the state.

Speaking as his remaining Yamina party loyalists MKs Ayelet Shaked, Matan Kahana, Abir Kara and Shirley Pinto look on, Bennett says he’ll soon be handing over the prime ministership to Yair Lapid, and “I’ll continue to help him as much as I can. His success is the success of the state.”

Then he declares: “I don’t intend to compete in the coming elections, but I will remain a loyal soldier in the service of this country.”

“The state of Israel is the love of my life, along with my family,” he says. “To serve the state is my calling.”

“I today end over a year as prime minister,” he says. “There is no harder task and no greater privilege.”

Bennett says his government has done in a year what previous governments failed to do in full terms. It has, he says, restored quiet and security to the south; got hundreds of thousands of people back to work; tackled two waves of COVID without a resort to lockdown; fought a wave of terror; raised soldiers’ pay, “and made clear to our enemies that those who send terrorists to Tel Aviv will pay the price in their own homes.”

“Soon,” he says cryptically, “there will be additional important news in fields that relate to our future” — a possible reference to advances in Israel’s ties with countries in the region. President Joe Biden is due in Israel and Saudi Arabia next month, and there has been much speculation about a breakthrough in this regard, and about widening defense alliances against Iran.

Bennett says he is sorry that some of those who supported opposition parties felt that their world had fallen in over the past year. “It cannot be that half the country feels itself in mourning when the other half runs the country,” he laments. “Both halves [of the political spectrum] need together to build a large and good government,” he urges.

“We proved this year that people with very different positions can work together, without abandoning their positions,” temporarily putting aside their ideologies.

“Only together can we win. If we are divided, we simply won’t be. If we are united nobody can overcome us,” he concludes. “Let’s learn to understand and respect each other instead of to hate.”