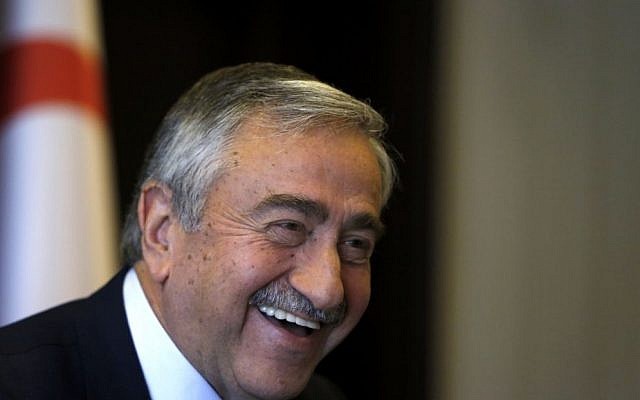 Turkish Cypriot leader Mustafa Akinci smiles is seen at his office during an interview for the Associated Press in the Turkish breakaway north part of the divided capital Nicosia in this ethnically Mediterranean island of Cyprus, Monday, April 4, 2016. (AP Photo/Petros Karadjias).

“Definitely (gas is) going to be an asset, if wisely prepared and conducted in a way not to trigger yet (more) tension in the area,” Akinci told The Associated Press in an interview.

Akinci criticized the island’s Greek Cypriot-run, internationally-recognized government for launching last month a third round for offshore gas drilling licenses despite an “understanding” by both sides that there’s “no urgency on drilling.”

He said exploratory drilling in waters off Cyprus’ southern coastline in 2014 led to peace talks breaking off amid a running dispute over rights to the divided island’s offshore mineral wealth.

Cypriot President Nicos Anastasiades halted peace talks with Akinci’s predecessor in July 2014 in response to a Turkish oil and gas search in waters where the Cypriot government had already licensed companies to drill. Talks recommenced in May last year.

Turkey doesn’t recognize Cyprus as a state and insists a unilateral Greek Cypriot oil and gas search flouts the rights of Turkish Cypriots to the island’s potential hydrocarbon riches. The Cypriot government insists it’s within its sovereign rights to carry out an oil and gas search and that any future mineral bounty will be shared with all the citizens of a reunified island.

Cyprus was split in 1974 when Turkey invaded after a coup aiming at union with Greece. Only Turkey recognizes a Turkish Cypriot declaration of independence and it maintains more than 35,000 troops in the breakaway north.

“My understanding was that when we started the negotiation this was not going to create trouble for our process,” Akinci said. “Now I see the potential danger.”

U.S. company Noble Energy discovered a field around 100 miles (160 kilometers) south of Cyprus that’s estimated to contain more than 4 trillion cubic feet of gas. France’s Total and Eni along with its South Korean partner KOGAS are also licensed to drill off Cyprus.

Akinci said with the “likely” improvement in relations between Turkey and Israel, Cypriot and Israeli gas could flow to Turkish and European markets through a pipeline linking a reunified island with Turkey about 70 kilometers (45 miles) away. A planned Turkey-Cyprus electricity cable link would further boost energy ties.

“This will not only be an energy corridor, but a corridor for peace also,” Akinci said. “If you have this in the context of a peace agreement, this can also become a tool of cooperation.”

The Turkish Cypriot leader said although European Union and U.S. officials have pledged financial support for a peace deal, the cost of reunification will be high — higher than any initial estimates.

Akinci said “we are closer than ever before” to a peace deal after strong progress he and Anastasiades have made in 10 months of talks. But differences remain and the pace of negotiations has slowed down because of parliamentary elections in the internationally-recognized Greek Cypriot south next month.

He said Turkish Cypriots should remain a majority in the north which they will administer within an envisioned two-zone federation, even though most homes and property there belong to Greek Cypriots.

Akinci said several “remedies” like property swaps will ensure that property rights are respected. But he suggested monetary compensation will likely be the preferred option to ensure Turkish Cypriots retain most of the property in the north and remain the numerical majority there.

“I don’t foresee a situation where the Turkish Cypriots are not going to become a majority in their own area that they will be governing,” Akinci said.

Akinci said Turkish Cypriots insist on alternating the presidency of a federal Cyprus between the two communities as well as having Turkey involved in any arrangement guaranteeing the security of a peace accord despite Greek Cypriot opposition on both points.