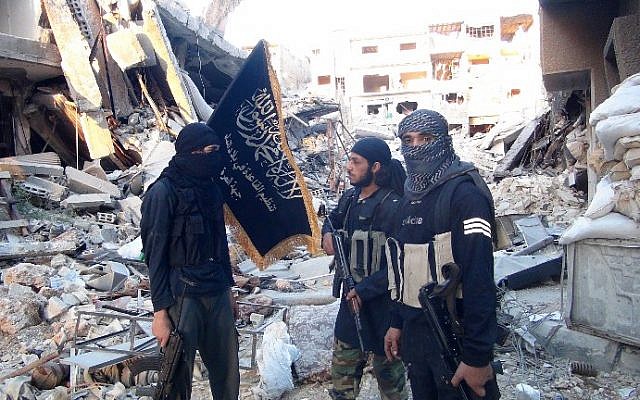 Illustrative photo of fighters from the al-Qaeda-linked Nusra Front near Damascus, Syria, on September 22, 2014. (AFP/Rami al-Sayed)

Reading the reports issued from US intelligence officials in recent days about the Khorasan Group, which has come under US aerial attack, one would be entitled to the belief that an elite undercover cell of terrorists under the direct command of al-Qaeda’s leader was posted to Syria, a jihadi safe haven, solely in order to incubate and hatch a mega terror plan against a Western state.

Army Lt. Gen. William C. Mayville Jr., director of operations for the Joint Chiefs of Staff, told a group of reporters last week that the group, whose leader was apparently killed in airstrikes last week, was in the “final stages of plans to execute major attacks against Western targets and potentially the U.S. homeland.”

James R. Clapper Jr., the director of national intelligence, asserted that “in terms of threat to the homeland, Khorasan may pose as much of a danger” as the Islamic State.

Former Israeli intelligence officials have been more circumspect. They did not dispute the potential danger of radicalized Western jihadi operatives training in Syria, but asserted that the so-called Khorasan Group was squarely part of al-Qaeda. Most believe that the organization was not particularly unique but was rather just another one of the hundred or so Sunni jihadi groups operating in the Hobbesian hell of Syria.

“They are not something else. They are not a different organization,” said Brig. Gen. (res) Nitzan Nuriel, a former head of the Counter-Terrorism Bureau in the Prime Minister’s Office. “It’s not that they said our task is to target America and that’s it. It’s not at all like that.” 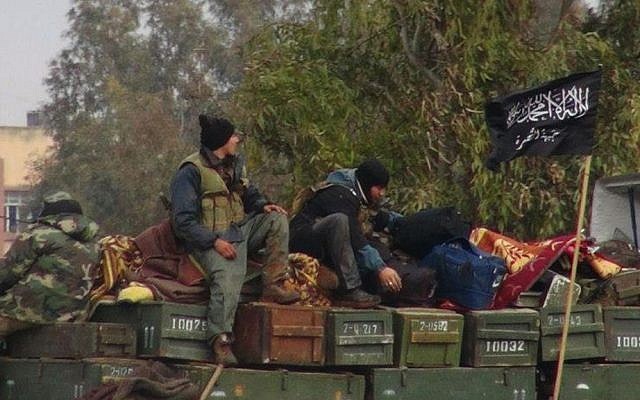 This January 2013 citizen journalism image shows rebels from al-Qaeda affiliated Jabhat al-Nusra, as they sit on a truck full of ammunition, at Taftanaz air base, that was captured by the rebels, in Idlib province, northern Syria. The photo was authenticated based on its contents and other AP reporting. (photo credit: AP Photo/Edlib News Network, ENN, File)

Nuriel likened the diversity of the jihadist groups in Syria to the myriad ultra-Orthodox sects in Israel. “The difference between the groups is minor, mere nuance,” said Nuriel, a senior researcher at the IDC Herzliya’s International Institute for Counter-Terrorism.
He described a situation in which an individual who is “number five or six” in the hierarchy of a certain organization breaks away, often for reasons of prestige, and starts his own affiliate.

In the case of the Khorasan Group, which is part and parcel of al-Qaeda Central, the name is rich in the central ingredient necessary for most forms of fundamentalism: nostalgia. Khorosan was a region in eastern Iran and western Afghanistan and Pakistan. The Washington Post noted that the region, which was part of the early Islamic culture in the 7th century, was discussed in a disputed Hadith that speaks of how “black banners will come out of Khorasan” in the end of days.

Nuriel said it is likely that many of the members of Khorasan are indeed from that region. The war in Afghanistan is a low scale conflict, he said, and al-Qaeda surely felt that it could organize a group of them under a local banner and bring them to Syria, where the Islamic State has eclipsed al-Qaeda’s supremacy in the battle against Bashar Assad and, crucially, in the battle for jihadist public opinion.

In illustrating the slight shades of difference between many of the jihadist groups operating in Syria, Nuriel said that, for instance, the sole difference between al-Qaeda and Islamic State is that the former wants to wage jihad in order to establish a caliphate and the latter wants to do both simultaneously. In fact, according to a report in the al Hayat daily, a group of fighters from the Nusra Front – al Qaeda’s official branch in Syria – swore allegiance to the Islamic State in Bukamal, near the Iraqi border, in late June.

But with al-Qaeda losing ground to the Islamic State, Nuriel said, it may well have begun talking about an airline attack, and the Americans, “who collect intelligence on everyone,” picked up the data and decided to use the opportunity to attack it as well. 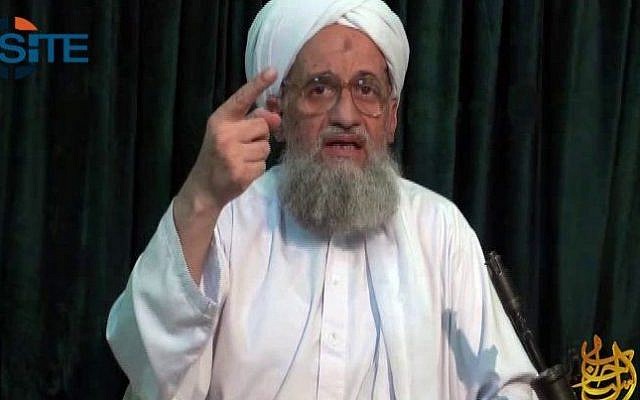 Yoram Schweitzer, a former head of the global jihad desk in the IDF’s military intelligence directorate and a senior researcher at the INSS think tank, agreed that the group was firmly part of al-Qaeda and therefore affiliated with the al Nusra Front — the official al-Qaeda affiliate in Syria — but said that the group appeared to be “a designated unit” tasked with drafting Western passport holders in order to execute attacks abroad.

This squared with US reports. In September, the Associated Press reported that, according to classified US reports, the Khorasan Group was operating in tandem with a notorious Yemeni bomb maker called Ibrahim al-Asiri, the man who built the underwear bomb that Umar Farouk Abdulmatallab tried to detonate on a Detroit-bound flight on Christmas Day 2009.

Dr. Mordechai Kedar, another military intelligence veteran and a lecturer in the Arabic department at Bar Ilan University, scoffed at the alleged distinctiveness or rigid affiliation of the group. “That’s such a Western way to look at it,” he said. “In the Middle East it doesn’t work that way.”

Instead, he said, “all you need is someone who knows how to put together a car bomb and you can call yourself an organization.”

Asserting that the shadowy vagueness of the names of the radical organizations is part psychological warfare – you thought you knew us? Poof! – and part evidence of a genuine harking to the past, he said that the many faces of Sunni extremism in Syria were all similar and all in constant flux. “The name of the game here is fluidity,” he said.