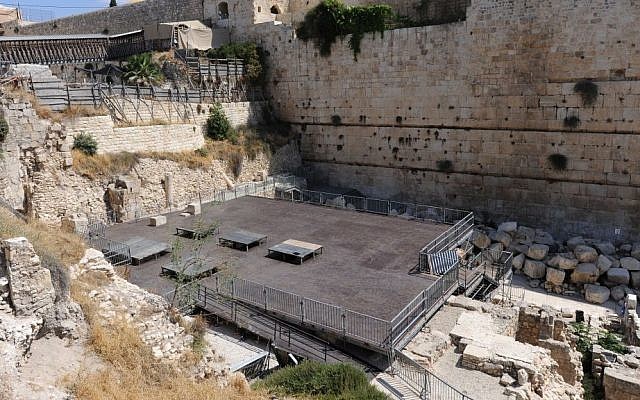 A platform designated for egalitarian prayer at the Western Wall (courtesy)

The Women of the Wall agreed in principle to transfer its monthly prayer services to a newly built egalitarian plaza and withdraw its demand to hold services in the women’s section of the Western Wall.

However, the group, which made the decision during a board meeting Sunday night, stated that it would only do so once all of its demands were met, among them for funding equal to the traditional prayer sites and the creation of a continuous plaza at the Wall to connect them all.

In a statement on the group’s website, Women of the Wall chair Anat Hoffman stated that the decision was not an easy one, but that as “agents of change, we see before us the duty to consider this new strategy.”

“We have to rise above dispute in order to build the future that we wish for the future generations of our daughters and granddaughters,” she said.

The statement concluded by noting that change and acceptance were required not only of the group, but also of Rabbi Shmuel Rabinovitch, the Western Wall’s rabbi. It said that Rabinovitch would have to ease his grip on the holy site and make it a place where members of all the streams of Judaism can pray freely.

The group’s demands are already known to Jewish Agency chairman Natan Sharansky, who outlined a proposal in April to build an egalitarian prayer plaza in order to end the ongoing feud between the pluralistic prayer group and Orthodox groups.

The Women of the Wall were pressured by the Conservative movement to be open to Sharansky’s proposal following the construction of the egalitarian plaza in August. When the plaza was initially built, Hoffman dismissed it as a “sunbathing deck,” and said that the organization would not accept a “second-rate Wall for second-rate Jews.”

The group is due to submit a position paper in the upcoming days to a committee appointed by Prime Minister Benjamin Netanyahu to resolve the ongoing dispute.