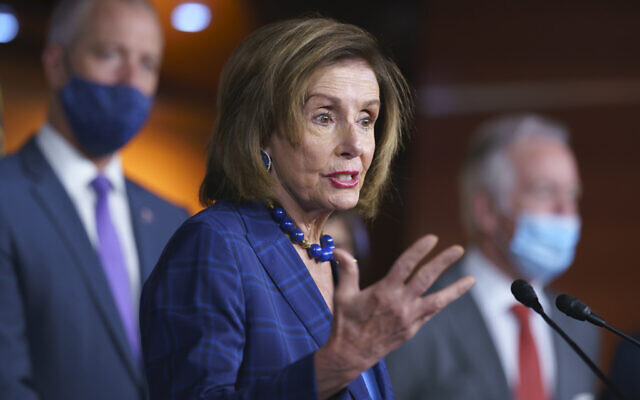 Speaker of the House Nancy Pelosi during a news conference at the Capitol in Washington, July 30, 2021. (AP Photo/J. Scott Applewhite)

A delegation of Congressional Democrats led by House Speaker Nancy Pelosi has arrived at Ben Gurion Airport for a two-day trip in Israel and the West Bank where members will meet with senior Israeli and Palestinian officials.

The Middle East tour is part of a larger itinerary that includes stops in Germany and the United Kingdom.

In a statement released upon landing, Pelosi says the Israel trip will focus on “recognizing our shared democratic values and mutual security.”

The group is scheduled to meet with Prime Minister Naftali Bennett, who is currently in Bahrain, President Isaac Herzog, Foreign Minister Yair Lapid, Defense Minister Benny Gantz and other senior Israeli leaders. They will also travel to Ramallah to meet with Palestinian Authority President Mahmoud Abbas.

Shortly before takeoff, Khanna spoke with The Times of Israel about his expectations for the trip.