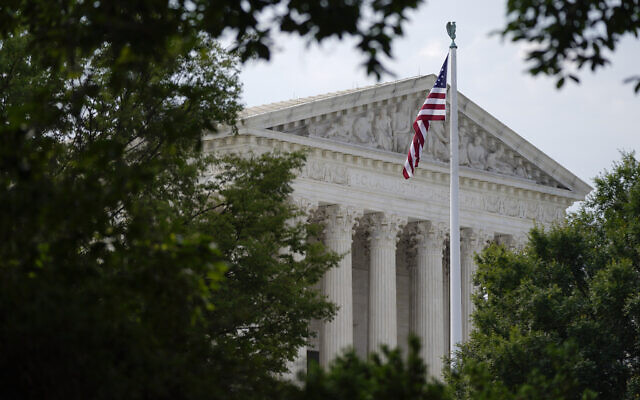 An American flag waves in front of the US Supreme Court building, Monday, June 27, 2022, in Washington. (AP/Patrick Semansky)

WASHINGTON (JTA) — The Supreme Court ruled in favor of a Seattle-area football coach who lost his job after leading prayers on the field following his team’s victories, in a decision that could have ramifications for Jews in public schools and the military.

A number of Jewish groups say the 6-3 ruling in Kennedy v. Bremerton, issued Monday, could roll back church-state separations that have protected schoolchildren from religious coercion for decades.

“This is a significant change in how we approach prayer in public schools, and one that will have a negative impact in particular on students of marginalized faiths and non-religious students,” said Rachel Robbins, the chairwoman of the Anti-Defamation League’s Civil Rights Committee. The ADL, which joined a friend-of-the-court brief on behalf of the school district, said it was “deeply disturbed” by the decision.

The expressions of concern came despite reassurances by Justice Neil Gorsuch that the ruling was in line with a famous 1992 Supreme Court decision in favor of a Rhode Island Jewish family who objected to clergy leading prayer at their children’s public school.

Writing for the court’s conservative majority, Gorsuch quoted from that decision, Lee v. Weisman, in which the court held “that religious beliefs and religious expression are too precious to be either proscribed or prescribed by the State.”

Jewish groups were not buying it.

“The Court’s see-no-evil approach to the coach’s prayer will encourage those who seek to proselytize within the public schools to do so with the Court’s blessing,” said Marc Stern, the chief legal officer of the American Jewish Committee, which had joined a friend-of-the-court brief on the side of the school district. 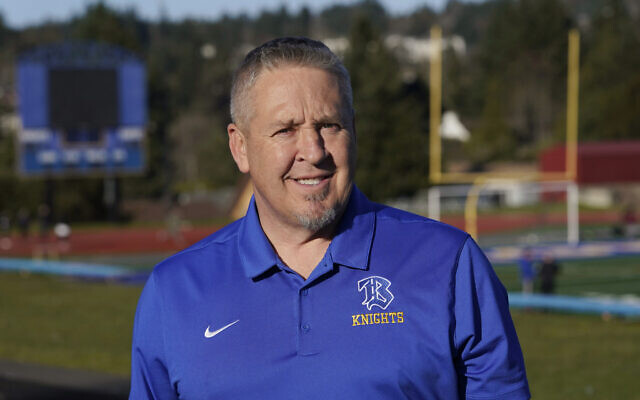 “That is no advance for religious liberty,” Stern added.

The Bremerton case centered on the activities of Kennedy, who started out by praying alone at the 50-yard line and did not call on others to join him. But soon after, students and others started joining Kennedy in prayer, alarming the school district. It proposed alternatives, including allowing him to pray after the game, but he declined and continued to pray, to increased media attention. The school district decided not to renew his contract.

The court concluded, essentially, that by preventing a Christian high school coach from praying, the school district had violated his civil rights no less than had it forced other children to pray.

“Here, a government entity sought to punish an individual for engaging in a brief, quiet, personal religious observance,” Gorsuch said, emphasizing that Kennedy had not explicitly urged students to join him in prayer.

“It seems clear to us that Mr. Kennedy has demonstrated that his speech was private speech, not government speech,” Gorsuch wrote. “This case looks very different from those in which this Court has found prayer involving public school students to be problematically coercive,” he said, specifically citing Lee v. Weisman.

Lee v. Weisman started with a Baptist clergyman who said at a 1986 middle school graduation ceremony in Providence, “Please rise and praise Jesus for the accomplishments of these children today.”

Merith Weisman’s parents, Vivian, the assistant executive director at the local Jewish Community Center, and Daniel, a social work professor, were unnerved, and the prayer triggered a series of events and lawsuits that culminated in the landmark 1992 case.

That decision was 5-4. Antonin Scalia, the late conservative justice whom Gorsuch replaced, said for years it was wrongly decided, and the religious right agreed.

President Donald Trump named three conservative justices, and with the new balance of power, the Supreme Court has in recent weeks ticked off a wish list for religious conservatives, from school choice to overturning abortion rights.

The AJC’s Stern said Gorsuch was cherry-picking quotes from the earlier decision to make his own opinion sound less far-reaching than it was.

“There’s a tendency to sanitize a practice, rip it out of its historical roots and look at it in splendid isolation, and so it [appears] not so terrible,” Stern said in an interview.

Kennedy, as an assistant coach, may not have the same power as the principal in the Rhode Island case who invited clergy, Stern said, but the coach still had coercive power over students, and it was disingenuous to suggest otherwise.

“Kids will do anything to get on a coach’s good side and get playing time,” Stern said.

Justice Sonia Sotomayor, writing for the liberal minority in the dissent, made a similar point, illustrating it with a photo of students surrounding Kennedy in prayer.

“Several parents reached out to the District saying that their children had participated in Kennedy’s prayers solely to avoid separating themselves from the rest of the team,” Sotomayor wrote. “No [Bremerton High School] students appeared to pray on the field after Kennedy’s suspension.”

The National Council of Jewish Women, also a signatory to a friend-of-the-court brief, said the latest decision was one in a series that eroded church-state separations, citing among others the recent decision directing the state of Maine to pay for religious schooling for students for whom reaching public schools is arduous.

“No student should have to choose between their religious freedom and being part of school activities,” Jody Rabhan, the group’s chief policy officer, said in a statement. “But today’s ruling in Kennedy v. Bremerton could force children enrolled in public schools to do just that.”

Mikey Weinstein, the Jewish veteran who leads the Military Religious Freedom Foundation, which advocates for religion-state separations in the military, said the ruling will undercut his years-long efforts to remove Christian prayers from military academy athletic events.

The decision “will serve to utterly and expeditiously destroy the precious wall separating church and state in our country and especially the US military,” he said.